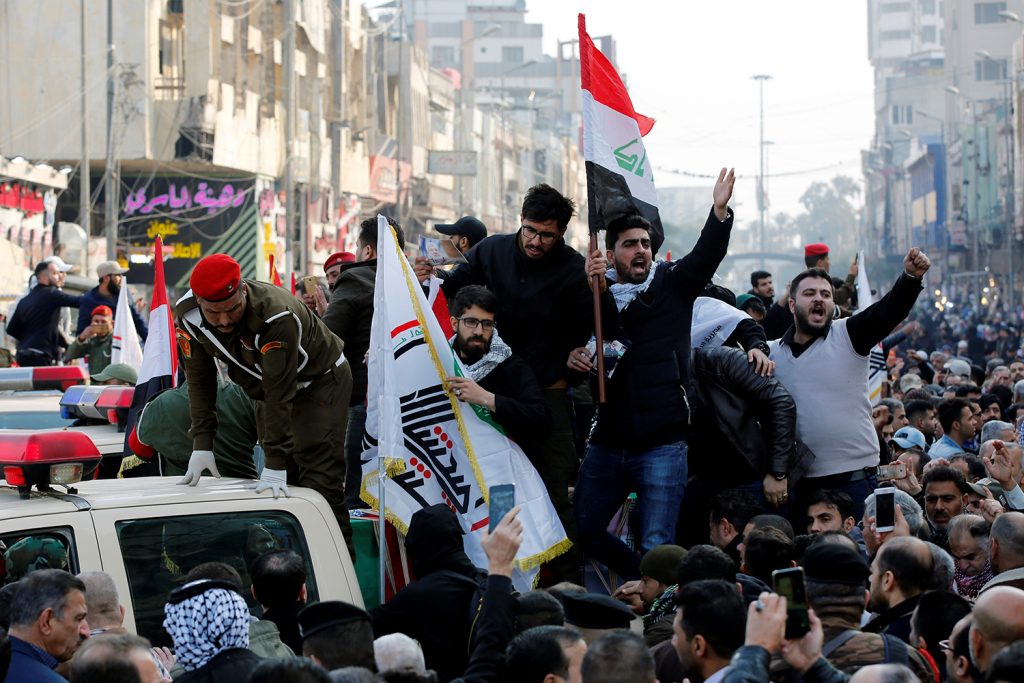 As a purveyor of violence, death, and destruction, few outside Iran will mourn the death of Iranian Quds Force leader General Qasem Soleimani. But the issue of what happens next is much more than where and how Iran chooses to take its revenge. Nothing less than the future shape of the Middle East is at stake.

Once again, the United States looks like the stumbling giant that can knock down a hornet’s nest but can’t kill the swarm. Iran has been deeply hurt by the loss of Soleimani, but no one should be under the illusion that there is not a deep cadre of well-trained subordinates to pick up where he left off. Just as the killing of Osama bin Laden didn’t end the terrorist threat to the United States, Iran’s network of well-funded, trained, and armed proxies in Iraq, Syria, Lebanon, Yemen, and beyond are as dangerous as ever.

Having served for two years in leadership positions at the US Embassy in Iraq, I reveled in the news a few months ago that Iran was finally getting the sharp rebuke it deserved from Iraqis for all its meddling. Protestors in the normally sympathetic Shiite areas of Najaf and Karbala were protesting in front of Iranian consulates and demanding Iran stop interfering in Iraq. It should have come as no surprise that Iran looked for an opportunity to provoke the US military and lure it back into the limelight, using their proxies to stir up a heavy-handed US response to their provocation and shift the focus of attention to the US presence and away from Iranian insensitivity to Iraqi sovereignty.

While many Iraqis are happy to be rid of Soleimani, others are uniting to demand the ouster of all US military forces. Iran has the distraction it needed and the United States is now in the unenviable position of having to protect Americans, military and civilians, everywhere in the world against retaliation and further escalation. Moreover, US influence in Iraqi politics and government institutions pales in comparison to Iran. With one American foot out the door in the region and recent memories of its abandonment of its Kurdish allies in Syria, Iraqi officials no longer trust their future with the United States. Iran will use its militarized militias and proxies to further dismantle the nascent Iraq democracy Americans spent so much blood and treasure supporting.

This predicament is compounded by the carelessness the United States has shown to its European allies over the last three years. At a time when there is a dire need for a united front to contain Iran, the United States is instead seen as the cause of its own troubles and compounding the mess. Unsurprisingly there is scant sympathy from Western leaders or their constituencies.

All this seems eerily reminiscent of the recent US foreign policy fiasco in neighboring Syria. In a very short time, the United States is moving from a position of significant influence to one of weakness by its own bumbling. It has lost the support of its internal and external supporters with respect to Iraq and has opened the door for others to step into the vacuum to play the role of savior and mediator. One need only replay the news clips from a few months ago when Russian Foreign Minister Sergey Lavrov visited Baghdad and Erbil, opening the flow of military weapons and offering its “good” offices to reduce tensions with Iran and the United States. Once again, Russia is likely to be the only winner in the region, compliments of the United States.

What is to be done?

First, a quick and urgent reset of US foreign policy to the Middle East, starting with the honest assessment of failings and a renewed recognition and respect for the sovereignty of its friends and allies in the region. The United States needs to show strategic patience in punishing adversaries with the cooperation of the countries it is supporting if there is to be any hope to remove Iran’s pernicious and deep tentacles into all aspects of Iraqi politics and society.

Second, the United States needs to rebuild trust with its European allies, acknowledging that Washington’s go-it-alone policy toward Iran is doomed to failure and that we need their help in containing Iran’s militaristic adventurism in the region. As upset as they are with the United States right now, Europe’s interest in stabilizing the Middle East to avoid further migrations of refugees into Europe as well as potential disruptions to energy trade make a compelling case for taking up the olive branch.

Finally, Congress, in its oversight role, must ask tough questions and a take a hard look at the administration’s national security and defense strategies that in the last year have dismissed the importance of responding to regional challenges in favor of a single-minded focus on the emerging threat of China and Russia in a “great powers competition.” The very place where this reemergent competition is likely to take place is in proxy warfare in the future Syria’s of the Middle East, Latin America, and Asia.

Daniel Speckhard, a former US ambassador to Greece and Belarus, served as deputy chief of mission at the US Embassy in Iraq during the George W. Bush Administration and is a former senior official at NATO. He is also the president and CEO of LutheranWorld Relief and IMA World Health.

New low in US-Iraq relations: What’s next for 2020

The attention on Iraq will shift away from the protesters and the reforms they are calling for to the “more newsworthy” events in the Green Zone and the aftermath of the attack on the US Embassy.

Image: Mourners gesture as they attend the funeral of the Iranian Major-General Qassem Soleimani, top commander of the elite Quds Force of the Revolutionary Guards, and the Iraqi militia commander Abu Mahdi al-Muhandis, who were killed in an air strike at Baghdad airport, in Baghdad, Iraq, January 4, 2020. REUTERS/Wissm al-Okili