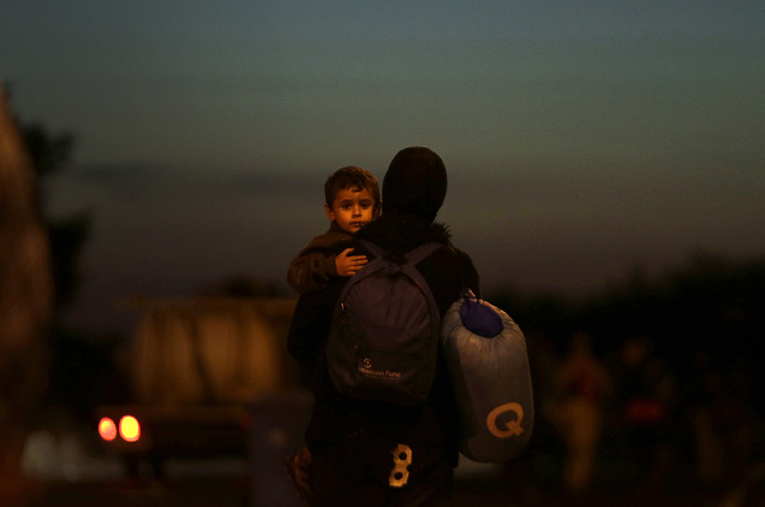 A migrant carries a child after crossing the Austrian-Hungarian border into Nickelsdorf, Austria, September 21. Roughly 10,700 migrants walked into Austria from Hungary on September 20 and a motorway passing through the border was partially closed, police spokesmen said. (Reuters/David W Cerny)

European ministers on September 22 approved a plan that would force EU member states to take in their share of 120,000 migrants, a majority of whom are fleeing the war in Syria.

In an unusual break from procedure, which emphasizes consensus on issues of national sovereignty, the ministers decided the issue on the basis of majority rules. The Czech Republic, Hungary, Romania, and Slovakia voted against the plan. Finland abstained.

The vote marked the latest effort by Europe to grapple with the migrant crisis—the largest movement of people since World War II—that is straining resources and goodwill of governments across Europe.

Fran Burwell, Vice President and Director of the Atlantic Council’s Transatlantic Relations Program, discussed the European decision in an interview with the New Atlanticist’s Ashish Kumar Sen. Here are excerpts from our interview.

Q: What are the details of the plan approved by EU ministers to distribute migrants across Europe?

Burwell: When people enter the EU they are supposed to register in the first country in which they arrive. Normally that will be Italy and Greece, which are considered the frontline states. It seems that Hungary has been offered the opportunity to be a frontline state, but there are questions about whether it wants to do that.

As people register, the idea is that of those registered people 120,000 would be redistributed across Europe. The quotas have been worked out through a complex calculation that looks at GDP, educational resources, unemployment etc. It turns out that Germany takes in quite a few more migrants than anyone else. The plan doesn’t have any surprises.

The idea is that the migrants will not be registered in Italy and Greece anymore, but in, for example, Germany, Sweden, France, Poland etc. The argument has come about because not all countries want to have these migrants be registered to them.

Q: Is the country where the migrant is initially registered responsible for that person?

Burwell: That’s not entirely clear, but if someone enters Europe and is registered in Greece and then travels to Germany because they hear there are more jobs in Germany, the German authorities can return them to the country of registration.

Q: Once the migrants are divided up can they be kept from traveling to other countries within the Schengen area?

Burwell: There is no way to do that given that there are normally no border checks between countries in the Schengen zone. Some Central Europeans have claimed that even if they take in more migrants, they don’t want to stay but to go to Germany.  They then argue that it would be necessary to build camps with barbed wire fences to keep these people from leaving. That’s not what anyone intends. The quotas are simply a way of sharing the ultimate responsibility and to make a gesture of solidarity with the Greeks and Italians. There is also a feeling that countries that have been less generous in offering to take in migrants should learn to think more about the burden sharing involved in being a member of the EU.

Q: Why are Hungary, Romania, the Czech Republic, and Slovakia opposed to quotas?

Burwell: They are opposed for a variety of reasons, depending upon whether you want to see it in a generous light or not.

They are, for the most part, not equipped to handle large numbers of migrants. Hungary really struggled in the initial days when the migrants arrived to provide basic shelter and logistical support. You saw lots of pictures of Hungarian citizens going to the train stations and handing out water bottles to the migrants. That’s not an organized migrant response strategy, and the government really was not prepared. That is a problem for many countries in Central Europe.

However, it is also true that politicians, particularly [Hungarian] Prime Minister [Viktor] Orbán have used this to generate support among people in their country who are less generous to people who do not look like them. This crisis has been used to generate political support among allies in a not very admirable way.

Q: This was an unusual vote for Europe. Given that all countries are not on board, what do you expect will be the likely repercussions of this vote?

Burwell: It’s going to be difficult. Slovak Prime Minister Robert Fico has said his government will not implement the decision, which means they will be subject to penalties under EU law. But it takes ages for that to work through in the system.

It is very unusual to use majority voting on this type of decision. In fact, what usually happens is that when it becomes clear to those in the minority that they are going to be outvoted, they decide to go with the group. That may well be what ultimately happened with Poland, which has been opposed to the quotas but voted to support this agreement. That’s a sign that Poland wants to be a core EU country and it has realized that it has to change some of the ways it approaches policy to do that.

This vote will probably generate some resentment among populations in the out-voted countries, whose leaders will now be able to say these migrants are being forced on them by the EU. That’s the pessimistic version.

The optimistic version is that, in fact, because the migrants can be registered in these countries and then they leave, the quotas won’t have much of an impact.

It will depend what is decided at the European Council summit [on September 23]. One thing that will be discussed is additional resources and powers to Frontex, allowing it to become a more capable EU border patrol. For the Greeks, this will be enormously beneficial. The Greeks have struggled with protecting their own borders. They just don’t have the resources to deal with this crisis. There needs to be more organized patrolling and protection of the external EU borders.

Another discussion likely to take place [on September 23] will be about the identification of certain countries as “safe.” That means that it will be presumed that asylum seekers from those countries are probably not justified. These “safe” countries would include most of the Balkan countries, which are on track for EU membership. That is probably a good decision because most migrants from the Balkans are economic migrants, quite unlike Syrians fleeing a war in their country.