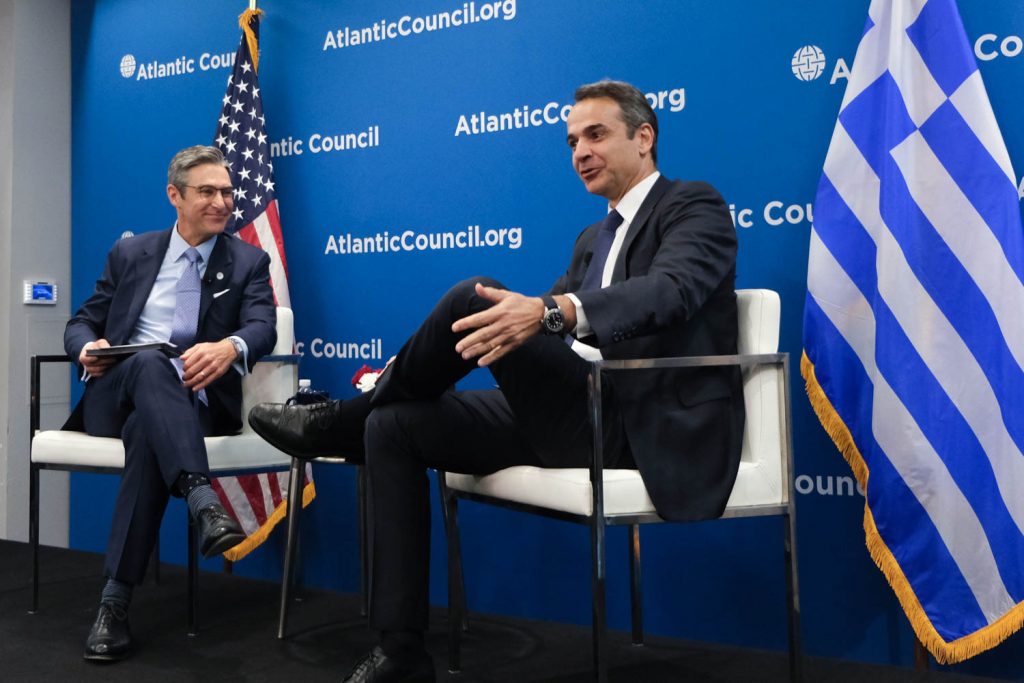 After a decade-long economic crisis that saw unemployment skyrocket and economic output fall by nearly a quarter, new Greek Prime Minister Kyriakos Mitsotakis said that Greece has transformed into a “very reliable and dependable partner for the United States in a volatile region.”

Speaking at the Atlantic Council on January 7 during his first trip to Washington as prime minister, Mitsotakis explained that his election on July 7 was a mandate from the Greek people “to change the country; to leave the crisis behind and to drive a path toward sustainable and inclusive growth.” He argued that even after a painful decade of tight fiscal restrictions and deep economic pain “we need to embrace reforms. We need to do reforms because they are good for the country and because we believe in them, not because they are imposed upon us by the International Monetary Fund [IMF] or our European creditors.”

In his first six months, Mitsotakis has already been “pushing an ambitious agenda of structural reform of the economy and investors are taking note,” according to Atlantic Council President and CEO Frederick Kempe. Atlantic Council Executive Vice President Damon Wilson lauded Greece’s turnaround, which “after a decade of depression…has emerged with its democracy and its institutions intact,” with “budget surpluses, restored growth, [and] extremists actually in retreat.”

The Greek prime minister noted that the progress made in getting Greece back into fiscal health means that Athens’ “borrowing costs on [some] days are lower than Italy’s,” and “there is a general sense within Greece that we are open for business.” He promised that his initial package of reforms, including simplifying license procedures, lowering taxes, and promoting more foreign investment, is just the beginning for his government. “For 2020 we will continue this aggressive reform agenda,” Mitsotakis declared.

HE suggested, however, that the continued 3.5% budget surplus target—put in place as part of agreements with the IMF and other European creditors for Greece’s bailout program—continues to unnecessarily burden Greece. The targets, he said, came from the time when Greece’s partners did not trust Greek politicians to responsibility spend government money, but “we can argue that this is no longer the case today. So we need to change the 3.5% primary surplus [targets] starting in 2021.” According to Mitsotakis, the IMF already supports abandoning the targets, and he was scheduled to meet with IMF Managing Director Kirstalina Georgieva in Washington after his Atlantic Council speech, followed by a meeting with US President Donald J. Trump at the White House.

Mitsotakis argued that releasing Greece from these spending restrictions “will give us the breathing space to address some of the more complicated issues regarding reforms that take time to show clear results…[like] public administration, justice, or education.” He promised that Greece would not violate the spirit of the restrictions, as his government wants “to use the additional fiscal space in order to further cut taxes and use only 20 percent of the additional space…towards targeted social spending to address extreme inequality and extreme poverty in Greece.” Athens needs “this additional fiscal space to turbocharge the growth [we] have already seen today,” he maintained.

A reliable partner in the Eastern Med

Mitsotakis also suggested the extra fiscal room will help Greece begin to revamp its international profile after years of singular focus on the economic crisis. “For ten years we were too focused on our internal problems,” he said, adding that “it is about time to return to the region with a forward-looking agenda and to punch above our weight.”

With Athens less preoccupied with problems at home, it is the perfect time to take advantage of a revamped US-Greece relationship, which Mitsotakis described as “the best it has ever been.” He reported that there is a “cross party consensus regarding the importance of the strategic relationship in Greece” and praised a new defense cooperation agreement that “enhances the US presence on the ground.” He suggested that Greece is also interested in joining the US F-35 fighter jet program, although the ongoing fiscal restraints would make it difficult without assistance.

Mitsotakis downplayed the implications of a recent agreement between Libya and Turkey to establish an exclusive economic zone from southern Turkey to Libya’s northeast. The Greek prime minister described the deal as “null and void” because it “assumes that our islands [including Crete] do not have an exclusive economic zone.” Despite this disagreement, he promised that Athens is “very open to keeping the channels of communication open” on the issue and would be open to international mediation at the Hague to resolve these disputes with Ankara.

In addition to helping the United States deepen the energy connectivity of the Eastern Mediterranean, Athens is also looking to unlock the potential of the Western Balkans region, Mitsotakis said. Although he continues to have concerns about the Prespa name deal between Greece and North Macedonia, including the implications for trademarks within Greece on the “Macedonia” name, the Greek prime minister assured that he will respect the agreement and that Athens is committed to “anchor the Western Balkans in the European Union.”

Mitsotakis said he sympathized with many of French President Emmanuel Macron’s concerns about the EU accession process, but opposed the decision to block the opening of negotiations with North Macedonia and Albania. He noted that Athens still has lingering issues to resolve with both countries (especially over the rights of Greek minority communities), but still believes that Europe “need[s] an accession process that is open” in order to have the leverage needed to work with both countries on outstanding issues.

With its new robust regional and international role, Mitsotakis argued that Greece is a “very reliable and dependable partner” for the United States at a time of incredible global instability. With the dark days of economic crisis behind them, it is now time for Athens and Washington, he said “to set a new, more ambitious target in terms of what we can achieve.”

Greece embraces the center and continues course out of crisis

“Greece is now reinforcing the strength of the center in European politics, rather than fueling a move toward the fringes,” Atlantic Council Executive Vice President Damon Wilson said.

Ties between the United States and Greece are not at risk of weakening, regardless of the outcome of snap elections for the Greek parliament in July, Geoffrey Pyatt, the US ambassador to Greece, said at the Atlantic Council on June 11.

Alexis Tsipras’ government has helped bring Greece back in from the cold.