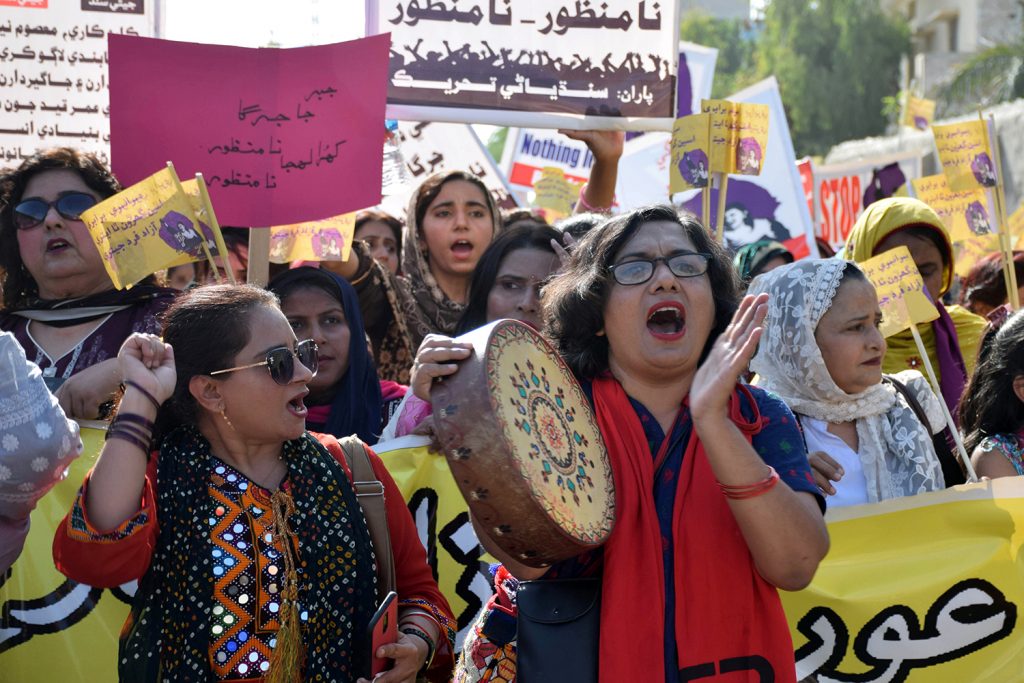 International Women’s Day on March 8 marked Pakistan’s third annual multi-city Aurat March or “women’s march.” As the Aurat March grows in popularity each year, it has also faced increasing criticism from religious parties like the Jamiat Ulema-e-Islam (“Party of Islamic Scholars,” JUI-F), and well as ordinary citizens disapproving of the March participants’ demand: gender equality-based social change. In a stark display of the limits on free speech in the country, the march’s slogan “mera jism, meri marzi,” sparked national debate. A translation of the US pro-choice women’s liberation mantra “my body, my choice,” the slogan was a voice of transnational solidarity with women’s movements throughout the world, especially the heavily social media documented 2017 Women’s March in the United States–the biggest single-day protest march in US history. This slogan, appearing on a placard in the 2019 Aurat March, also is intended to spark the necessary discussion on the place of women in Pakistani society. In the Pakistani context, however, critics see both the march and slogans like “my body, my choice” as vulgar imports of a liberal, foreign culture. This perceived liberalism, for conservative defenders of nationalism-infused morality, is seen as funded by appendages of the West and as a challenge to the fabric of Pakistan’s culture and society—which is largely rooted in Islam and conservative South Asian values.

This said, the slogan was met with resounding backlash for other reasons. The appropriation of a reproductive rights slogan to signal support for women’s bodily autonomy was deemed to be a profane sentiment by many critics. Orthodox clerics like Faiz Muhammad of the Jamiat Ulema-e-Islam (“Party of Islamic Scholars,” JUI-F ) argued that Mera jism, or “my body,” violates the belief that one’s body belongs to God alone, while meri marzi or “my choice,” suggests that one should institute freedom of choice in matters of their own bodies, potentially over social and religious norms. In Islam, devout Muslims are expected to act only in submission to God, following sacrosanct rules about corporeal actions in both public and private. Hence, orthodox followers find it sacrilegious and a threat to society when women—socially expected to be relegated to the private sphere—publicly claim the right to do as they please with their own bodies.

This perceived obscenity was one of the reasons a handful of conservatives brought petitions before the High Court in the major cities of Lahore and Islamabad, seeking to prohibit the 2020 Aurat March from taking place there. The petitions were rejected by the courts days before the march, but a counterprotest formed in the capital city of Islamabad called Haya March or “Modesty March,” where certain protestors threw sticks and stones at Aurat March participants. Despite these attacks, the Aurat March was well attended in the cities of Lahore, Islamabad, and Karachi, and its participants far outnumbered those at the counter-movement.

However, Aurat Marchers are not the only ones in the fight for gender justice, women’s rights, and a place in the public sphere. For the third year in a row, March organizers recognized Pakistani social media celebrity Qandeel Baloch, who passed away in 2016 at the hands of her brother in a so-called “honor-killing.” Qandeel, a part-time model and actress, found fame in 2013 after her Pakistan Idol audition was mocked and she responded to the judges’ jabs about her performance on her Facebook account. Her unabashed and witty personality led her to be named one of the ten most Googled people in Pakistan, with hundreds of thousands of Facebook followers. Qandeel went viral in the spring of 2016, when she offered to perform a strip tease for Pakistani cricket player Shahid Afridi, on the condition that the Pakistani team beat the Indian team in the 2016 T20 World Cup. So outrageous was this proposed act of bodily autonomy by a Pakistani woman that Qandeel was invited onto talk shows, including one on news channel Neo TV, where the morality of this proposed act was questioned by cleric Mufti Qavi.

Just like the slogan “mera jism, meri marzi,” Qandeel was criticized for acting in a manner contrary to conservative Pakistani culture. Not only does sensually revealing one’s body to the public go against Islamic principles surrounding modesty, but immodest women threaten the very nationalism that rests on such gendered internal hegemony. Pakistani nationalism, then, is a language through which gender hierarchies are justified, and in turn, one privileging masculine prowess and political expression. In June 2016, Qavi was captured in one of Qandeel’s video-selfies, in what appeared to be the closed quarters of a hotel with no one else in sight. Qandeel recorded herself sitting next to Qavi and even wore his hat in a manner suggesting an intimacy that questioned Qavi’s religious authority, despite his claims that the interactions with Qandeel were innocent. By being physically present with Qandeel alone, Qavi went against the very religious principles surrounding gender segregation he preaches. Qandeel’s socially unacceptable behavior threatened to damage Qavi’s reputation and, a few weeks later, led to her death at the hands of her own brother. Qandeel’s do-it-yourself activism not only pushed the boundaries on the extent to which the average Pakistani woman may participate in the public sphere, but it also redesigned the public sphere—melding the private sphere with the public sphere through social media.

Yet, as witnessed with the backlash from the recent Aurat March, the struggle for women’s visibility in the public sphere is far from over. In October 2019, TikTok star Hareem Shah, a privileged young woman from the conservative city of Peshawar, went viral for recording a video of herself in the Foreign Office of Pakistan. The video showed her sitting in a space reserved for political leaders—prompting questions about how she had access to such an official space. Moreover, coming from a young woman who had typically posted herself singing and engaging in everyday activities like going to the gym, her presence in this formal political setting elicited public discomfort about an ordinary woman’s bodily autonomy and presence in the Pakistani public sphere.

Zainab Alam (@_zainab_alam) is a Ph.D. candidate in Political Science at Rutgers University, where her research focuses on digital democracy in South Asia.

In order for Venezuela to transition to a more democratic, inclusive, and peaceful society, the interim government must strengthen women’s political participation and decision-making power.

Diversity, Equity, and Inclusion by Isabel Kennon and Grace Valdevitt