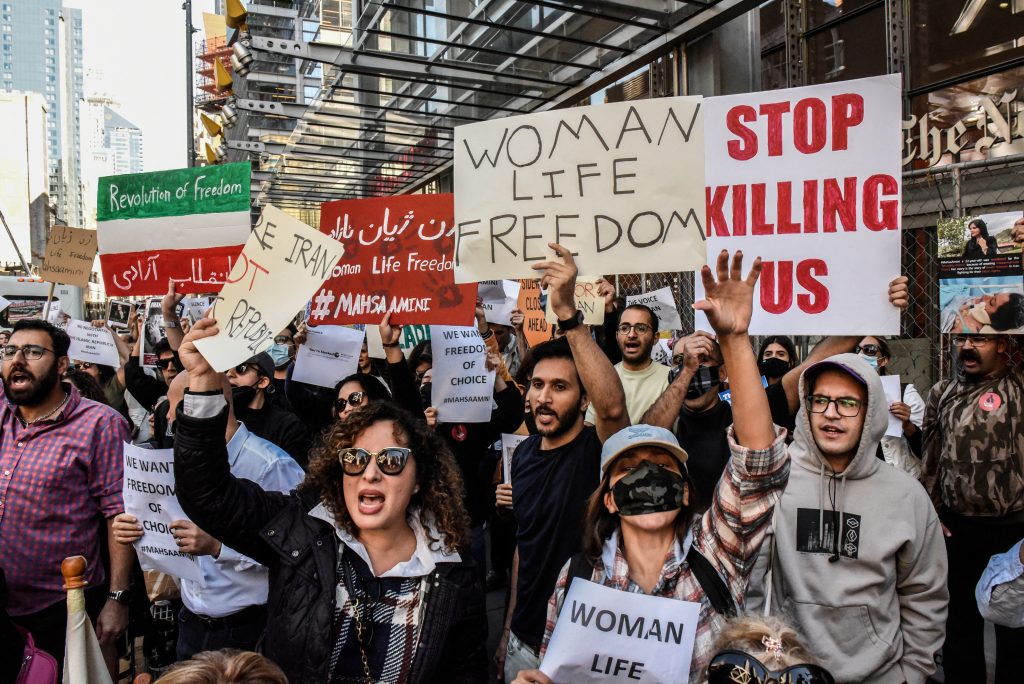 Just days after the Taliban’s occupation of Herat in August last year, a group of Herati women gathered outside the governor’s office, chanting, “do not be afraid, we are all together.”

The slogan is a famous one among Iranian demonstrators in recent years. Afghan women’s heroic resistance to the Taliban’s brutal oppression and gender apartheid later produced additional slogans, especially the guiding one “bread, work, and freedom,” which was inspired by recent civic movements across the wider region. Only days after the Herat protest, Iranian women’s rights activists joined a demonstration outside the Pakistani Embassy in Tehran in solidarity with Afghans. As in Herat, the demonstration in Tehran was also dispersed.

The latest women-centric nationwide protests in Iran were triggered by the death of Mahsa Amini at the hands of Iran’s notorious “morality police.” As such, the demonstrations have given rise to another guiding slogan in Iran: “women, life, and freedom.” The similarities between these slogans reflect the shared character and struggle faced by Afghan and Iranian women, both consistently denied their basic human rights by governments but also by social norms. However, this connection runs deeper than the present protests: prior to the rise of nation-states Iran and Afghanistan in the early twentieth century, the two countries belonged to the same civilizational space, known as the Iranian plateau. Women’s rights and freedoms fluctuated massively between different eras, with the end result being the system of gender apartheid that we see today.

Iran and Afghanistan continue to face similar and often shared challenges, including a now century-old and counting struggle for independence and constitutional polity against colonial Western and Russian empires in addition to Islamist and clerical oppression at home.

Prior to repressive policies by the clerical class, women were prominent in Persian society

Iranian civilization can be termed an “aesthetic” world, which contemporary gender sensitive minds would characterize as feminine. “Iran” is used to name girls among locals as well as the “sun,” which has a central presence in Iranian mythology and iconography. The epicentre of medieval Iran—known as the Khorasan and comprising the eastern portion of modern Iran, Afghanistan, and Central Asia—literally translates to “the land of the sun.” The Persian language is among few which is gender neutral. Prior to the bloody imposition of Islam’s discriminatory provisions and tribal practices by the invading Arabs, there was an entirely different socio-political system, including the place and status of women in pre-Islamic Iran. The goddess Mitra was the founding figure of the ancient religions of Iran. There were also prominent women warriors and stateswomen both before and after Islam’s arrival. In 480 BC, Persian Naval Chief Commander Artemisia I of Caria led successful battles against the Greeks. Queen Gawharshad Begum helped to elevate Herat, then the capital of the warring Timurid dynasty, into a thriving cosmopolitan hub dubbed the “Florence of the East” in the fifteenth century.

Moving forward to the twentieth century—when women’s rights became a central and contested discourse in both countries—Reza Shah of Iran and Amanullah Khan of Afghanistan joined their Turkic counterpart, Ataturk, in modernizing their respective societal and political systems. Though neither were faultless, the emancipation of women was nonetheless prioritized, including opening girls-only schools, sending female students to Europe for further education, and relaxing female dress codes. These social and political reforms prompted strong resistance and backlash from conservative and clerical constituencies that felt threatened, something exacerbated by excessive and incompetent implemention of these reforms.

The clerical class subsequently became the leading opponent to emancipation of women and women’s rights. They justified their attack as defending the honor, identity, and religious principles of their countries against invading European colonization and aggression. In other words, anti-colonization rhetoric was used to attack emancipatory values of modernity, such as the equality of men and women. Later on, Islamist parties continued to attack women progress as another example of the westernization of Muslim societies.

The West became involved because of geopolitical interests, not to support Afghan and Iranian women

Contrary to the clerical or Islamist accusation that promotion of women’s rights is nothing more than a Western imposition, Western and Russian political powers were principally pursuing their geopolitical and economic interests with little eye to human rights in their colonies. As an example, Reza Shah Pahlavi of Iran and King Amanullah Khan of Afghanistan were fiercely opposed by British colonial powers as well as the clergies who orchestrated their eventual toppling from the throne despite their modernizing policies.

There is thus an unwritten agreement and practical collaboration between Western colonial powers and clerical or Islamist power centers against progressive and constitutional movements in the Islamic world, especially in Iran and Afghanistan.

In Iran, while it is widely acknowledged that nationalist prime minister Mohammad Mosaddegh was toppled in a coup orchestrated by the intelligence services of the United Kingdom and United States in 1953, the Western role in Iran’s Islamic revolution is hotly disputed. Mohammad Reza Shah blamed Western powers for enabling Ayatollah Khomeini’s spectacular ascendancy. Recent declassification of secret documents in the United States somewhat corroborated such a charge. Shah’s early mistakes and Khomenini’s charisma and political skill were additional factors.

Similarly, in Afghanistan, Western support to the mujahideen in the 1980s is universally acknowledged. The precedent set by those events resurfaced, however, when the February 2020 peace agreement between the Taliban and the United States effectively handed over Afghanistan’s nascent republican polity to the Taliban’s totalitarian Islamist reign. Despite ensuing symbolic gestures by Western powers such as the US Department of State’s “Alliance for Afghan Women’s Economic Resilience”—intended to show commitment to Afghan women—their clear abandonment of Afghanistan to the Taliban has dulled the shine of Western rhetoric about women’s rights. US President Joseph R. Biden’s approach to Afghanistan resembles former US President Jimmy E. Carter’s handling of Iran’s Islamic Revolution, including his naïve optimism and sheer incompetency in managing the mullahs of Afghanistan and Iran.

In short, Western powers will support in whichever power center suits their interests in a given moment. The repressive forces seeking to maintain gender apartheid in the region are thus only relevant insofar as they fit (or do not fit) into that broader picture, not because of values.

Unlike the celebration of the Taliban’s victory among Islamist constituencies across the Islamic world and the nationalist (disguised as liberal) circle in Pakistan, Iran’s large but suppressed democratic constituencies have been mourning the political loss of their democratic Afghan cousins, who were not only key allies but also a source of inspiration.

The ongoing women-centric civic resistance to clerical oppression on the streets of Afghan and Iranian cities and university campuses—building on the shared history and struggle of women in the Iranian plateau—has given rise to the term “Af-Irn” hopes of emancipation of the citizens of both countries. Af-Irn is a civilizational movement that challenges both Islamist dystopia and Western hypocrisy. It is multifaceted in nature, with serious implications for the two countries and beyond.

Iran and Afghanistan have suffered from a similar phenomenon, being sucked into their peripheral regions. Afghanistan’s entanglement in South Asia’s sub-continental geopolitics and Iran’s interference in Arab affairs pulled both away from their overlapping civilizational core. Though the post-revolutionary regime in Iran dragged it into the Arab-Israeli conflict, this interference has been faced with both Arab resistance and disapproval among the Iranian public. The slogan of “neither Gaza, nor Lebanon, I give my life to Iran” is popular among Iranian demonstrators, something mirrored by recent protests in Iraq against Iran’s interference in Iraqi politics. On the other hand, the slogan of “down with the Taliban, either in Tehran or Kabul” is interchangeably used in both countries.

A shared history and a shared future

The two dynamics of Af-Pak and Af-Irn will continue to shape Afghanistan’s ongoing transition from its present tragic situation towards either “Talibanistan” or “Khorasan.” Its outcome is far from determined as each is endowed with powerful allies and forces, including the situation in Iran.

The brave women protestors clad in historically significant black clothing have deep and shared historical inspirations and precedents. The first successful Khorasani rebellion against cultural or political imperialism was called the “Movement of the Black Raiment” led by Abu Muslim al-Khorasani in 755 AD. Khorasani toppled the Umayyad Caliphate, an Arab empire ruling discriminately upon its non-Arab subjects, principally the Iranians.

The coming months will show if there is to be another “Female Black Raiment” in the history books.

Dr. Davood Moradian is director-general of the Afghan Institute of Strategic Studies (AISS).

Though Afghan women have been included in certain peacebuilding efforts, these experiences were largely tokenist and minimally empowering.

Supporting Afghan refugees: A case for cultural sensitivity and humility in resettlement practices

In recognition of the one-year anniversary of the Taliban retaking control of Afghanistan, the authors of this publication seek to raise awareness of the whole person needs of settled refugees in the United States by highlighting experiences of a number of newly resettled Afghan refugees.

Image: People participate in a protest against the Islamic regime of Iran and the death of Mahsa Amini in New York City, New York, U.S., September 27, 2022. REUTERS/Stephanie Keith