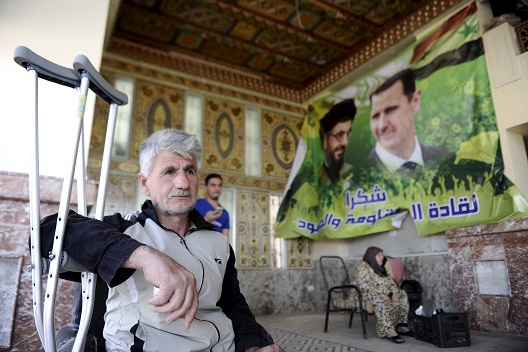 Speaking to the BBC on Sunday, President Barack Obama took a firm, unbending, and principled stand against something not a soul has advocated: that the United States and its allies use ground forces to oust Bashar al-Assad. “It would,” pronounced the president, “be a mistake for the United States, or Great Britain, or a combination of Western states to send in ground troops and overthrow the Assad regime.” Vanquished once again, this time for the benefit of British viewers, was the customary invade-and-occupy straw man.

Having bested the mannequin, the president then suggested, with fine impartiality, that “international pressure” be applied to all parties—Russia, Iran, and “those moderate oppositions that exist and may be fighting in Syria”—to sit down and negotiate a political transition. Perhaps a new set of firm talking points can be composed for use with Assad regime supporters now busily at work on the unthinkable: military victory in Syria. As for the Syrian opposition, it need not be pressured to negotiate political transition in good faith. But because it is not Russia, or Iran, or the Assad regime, it is a lucrative target for tough talk about lowering expectations, even as leverage-free administration officials publicly call on Assad to do the right thing and quit.

The president prefaced his remarks with the observation that, “Syria has been a heart-breaking situation of enormous complexity, and I don’t think there are any simple solutions.” Syria’s “complexity” is the administration’s last ditch defense for an astounding five year bottom-line: not one single Syrian protected from the merciless, unrelenting, and deliberate campaign of mass homicide and collective punishment inflicted by the Assad regime against millions of Syrians.

Rather than instructing his secretary of defense to give him options to complicate the deadly work of Mr. Assad and mitigate its worst effects, the president consistently rebukes arguments no one makes. No doubt he banks on public indifference and ignorance. No doubt he counts on people nodding sagely when he says Syria is complicated and that it would not be a great idea to invade the place. He knows this is base trickery. Is this simply a matter of trying to fill and kill time between now and January 20, 2017?

What seems utterly unknowable is why the “heart-breaking situation” of a humanitarian abomination metastasizing into a multi-continent political crisis has never inspired a clear statement of the commander-in-chief’s intent with respect to the protection of Syrian civilians. Yes, the president has, according to White House staffers, occasionally reacted with exasperation to administration critics of his Syria policy by declaring himself willing to listen to any idea anyone wished to table.

This is not, however, the same thing as the commander-in-chief grabbing his national security adviser and his secretaries of defense and state and saying ‘Look: these regime mass murders are flooding our allies with migrants and are blighting the prospect of a negotiated settlement. I want to see some military options that would make it hard for Assad to do his worst. We can’t protect everyone everywhere, but I want pilots in combat aircraft who bomb schools, hospitals, markets, and mosques to know that the five year free ride is over. Go ahead and lay out the risks and tell me what our allies and partners can bring to the table. I don’t want it said a century from now that we did nothing when hundreds of thousands of people were being slaughtered in Syria. And I know in the here and now that those Geneva talks will go nowhere if one side’s constituency is being slaughtered and scattered.’

Apparently the foregoing words do not represent the intent of the incumbent commander-in-chief. Why not? What is his intent? To feel the “heart-break” and admire the “complexity?”

Many critics of administration Syria policy have taken it upon themselves to play the role of the secretary of defense (and perhaps even that of the president) by identifying the civilian protection option that ought to be chosen. There are advocates for no-fly zones, protected zones, shoulder-fired anti-aircraft weaponry, cruise missile attacks on military air bases, and other options. Some of the analysis is thoughtful and helpful. But everything must begin with the commander-in-chief’s belief that mass murder in Syria is morally unacceptable and politically disastrous. He must have a firm desire to do something about it. And his intent must be articulated in unmistakably direct and directive language to the key members of the National Security Council. If Barack Obama’s mind remains closed and his lips sealed, the greatest essay ever on making industrial-strength homicide in Syria harder to do is simply a waste of time for author and reader alike, unless of course Mr. Obama’s successor is the desired audience.

No political progress toward ending Syria’s agony and the horrific hemorrhage of its people is possible without first passing through the portal of civilian protection. As long as Syrian civilians are on the bullseye nothing will be accomplished at Geneva. President Obama and his word-smithing staff may well spend the balance of their White House days dropping rhetorical barrel bombs on imaginary critics even as Bashar al-Assad’s pilots roll the real things off the ramps of Russian helicopters onto children and their parents down below. It is one thing to mislead and score useless points by debating an empty chair. It would be far better if the president and his transatlantic partners were to act in ways consistent with that which they all know to be true: there will be no end to the gushing arterial wound that is Syria as long as Assad and his external supporters target civilians with massive lethality and total impunity.

Those who believe that Tehran and Moscow consider themselves home free, gleefully celebrating the political survival of their Syrian client without a care in the world, underestimate the knowledge and sophistication of Iranian and Russian officials.

It is the memoir of someone who is anything but a time server; someone who truly cares about things and who has tried—often successfully—to make a difference for the better.

Former national security advisor, Susan Rice, recently wrote an op-ed lamenting the lack of options in solving the Syrian crisis, much like Samantha Powers, however, their arguments do not hold up against scrutiny.

Image: Photo: Patients that were evacuated from two rebel-besieged towns of Foua and Kefraya in the northwestern province of Idlib, are seen inside a hospital that was struck by an explosion on the outskirts of the Sayeda Zeinab district south of Damascus, Syria, April 25, 2016. In the background a poster depicting Syria's President Bashar al-Assad and Lebanon's Hezbollah leader Sayyed Hassan Nasrallah. REUTERS/Omar Sanadiki