Like former Ambassador to the United Nations Samantha Power, Susan Rice—former US President Barack Obama’s last national security advisor—expresses deep personal sorrow for what has happened to Syrians since March 2011. But, like Power, Rice wraps her regrets in a narrative aimed at selling the proposition that there was, in the end, really nothing her boss could do to protect Syrian civilians from mass homicide; nothing short of involving the United States in another Iraq-like invasion and occupation and perhaps even World War III. The proposition is no truer coming from Rice’s pen than it was from Obama’s lips.

Rice’s thoughts on Syria are conveyed in her new memoir Tough Love and summarized in the October 7, 2019 The Atlantic in an article entitled “In Syria, America Had No Good Options.”

The article’s title suggests a question: Options for what? Surely there were no painless options for fully implementing President Obama’s August 2011 declaration that, “The time has come for President Assad to step aside.” But were there also no good options for protecting civilians from mass murder, thereby minimizing the far-flung geopolitical consequences of a terrified populace on the run?

President Obama always conflated these two questions into one, thereby enabling variations on the following basic argument: The Syrian crisis, including systematic crimes against humanity, is unsolvable while Assad clings to power; unless Assad voluntarily departs via negotiated political transition, the only sure way to remove him and resolve the crisis would be by invasion and occupation; invasion and occupation are, for multiple reasons, not on; therefore all military means short of an Iraq-like operation are worthless; they can neither resolve the crisis nor sustainably protect Syrian civilians from a homicidal regime. The president would sometimes supplement this formulation by observing that, even if he were to crater regime runways and destroy regime aircraft, it could all be replaced over time.

For acute observers like Power and Rice, however, the conflation is somewhat problematical. Both say they favored a military response to the August 2013 Assad regime erasure of President Obama’s chemical weapons red line. Both (at times) recognize that civilian protection—admittedly imperfect variations thereof—did not necessarily require regime change. But both—while eloquently sharing deep personal regrets about what happened to defenseless Syrian—engage in verbal gymnastics to try to defend and justify the president’s bottom line.

For Power it was a matter of artificially reducing military options for civilian protection to only one: a no-fly zone. Knocking down that straw man was easy.

For Rice, the justification is wordier: “I could see no version of US intervention in Syria that we should have conducted—except very limited strikes to respond to chemical-weapons use. For instance, strikes against Assad’s air force, as some advocated, would not have been one-off endeavors. To sustainably degrade his military capacity, given Assad’s external backing and robust air defenses, would have required a long-term air campaign against a far-better-equipped and more sophisticated army than Qaddafi’s.”

Just as Samantha Power sets up the no-fly zone and its many downsides for a brusque, back-of-the-hand dismissal, so Susan Rice cites Assad’s “robust air defenses” as forbidding anything more than “limited strikes” in response to chemical warfare. Yet this argument presupposes that the US military would have been unable to do serious damage to Assad’s tools of mass homicide without putting piloted aircraft into Syrian airspace. It also seems to assume that, had they been employed, American piloted aircraft – unlike Israel’s—would have been unable to cope successfully with Syrian air defenses.

A lack of sustainable options

Rice is probably correct, however, in asserting that strikes against Assad’s air force prompted by atrocities would not have been one-off endeavors. Indeed, massive cruise missile strikes targeting the air force, artillery, scud missile storage areas, and the like might not have dissuaded the regime from resuming mass civilian homicide once (presumably) resupplied by Russia. But resupply would have taken significant time, and a return to regime mass murder could have inspired an encore performance by American cruise missiles. Given the dire consequences of inaction for Syrians, their neighbors, and American allies, would a sustained campaign of this nature have been prohibitive in terms of danger or expense? The view here is that it would have been a bargain.

Rice, however, makes a very powerful counter assertion: “If we took action that directly targeted Assad or his military, we would be at war with him, Iran, and ultimately Russia.” Yet the very action Rice favored—military retaliation for the August 2013 chemical atrocity—would have targeted Assad’s military. So: either risking World War III would have been justified one time (in the summer of 2013) or the argument itself is specious. This writer believes the latter. And the inclusion of Iran in the formulation brings to mind the possibility that leaving Syrian civilians absolutely undefended was explained in part by the president’s fear that targeting Assad’s military would offend Iran and derail nuclear negotiations. Indeed, the reported letter of President Obama to Iran’s Supreme Leader in October 2014 supports this view.

Iran aside, however, much of the Obama-Power-Rice reasoning spills over into the Trump administration. Yes, US President Donald Trump twice ordered cruise missile strikes in retaliation for regime chemical attacks. But chemicals are a footnote to volumes of regime war crimes; chemicals account for under one percent of the civilians murdered by Assad and his confederates. What, therefore, is to prevent Assad from concluding he has unlimited discretion to kill the defenseless so long as he avoids using chemicals?

As indications mount that the regime is on the verge of resuming civilian slaughter in the Idlib Province, President Trump may well choose to imitate the disinterested passivity of his predecessor. Indeed, in responding to recent regime air attacks on civilian medical facilities in northwestern Syria, the US State Department has returned to a formulation that has, for years, broadcast Western weakness to Assad and his allies: “There is no military solution to this conflict. Attacks on innocent Syrians must cease immediately for the humanitarian crisis to end and for the political process to go forward in line with UNSC Resolution 2254.” Who is behind the “must?” What is the “or else?” What do adversaries of the United States conclude when they see gaps between words and action?

This writer takes at face value Susan Rice’s lament that, “My heart and my conscience will forever ache over Syria.” Samantha Power expressed a similar sentiment. But why? If the final destination of a long and winding rhetorical road is, “As pained as we felt, as much as our values were offended, and as amoral the decision not to intervene directly in Syria’s civil war seemed, I believe it was also the right choice for the totality of US interests,” then what’s to mourn in such personal terms? One hopes that people of Susan Rice’s and Samantha Power’s caliber realize that, out of respect for a man they deeply admire, they are defending the indefensible; that millions of innocent people have paid and continue to pay dearly for a policy failure both gratuitous and catastrophic.

Ambassador Frederic C. Hof is Bard College’s Diplomat in Residence and a Distinguished Senior Fellow at the Atlantic Council. 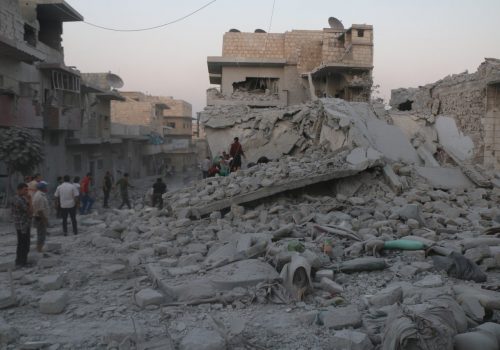 It is the memoir of someone who is anything but a time server; someone who truly cares about things and who has tried—often successfully—to make a difference for the better. 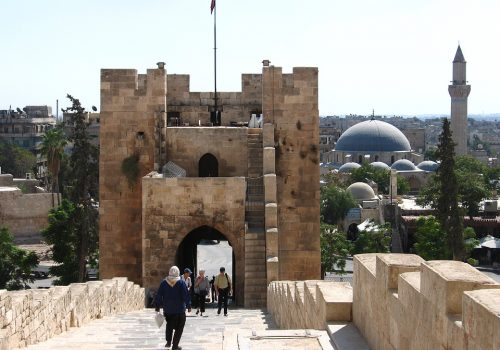 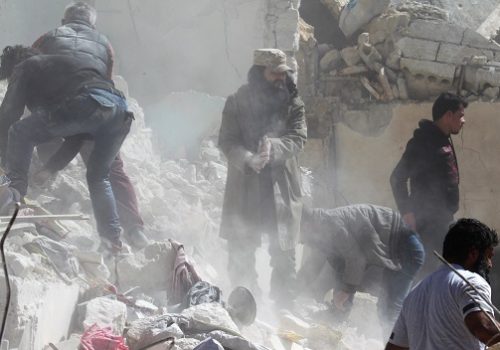 Yet it is not the policy of the United States that violent regime change in Syria be pursued. Political transition in Syria from corruptly violent family rule to a system reflecting inclusive legitimacy and rule of law should proceed through peaceful negotiations in accordance with the applicable United Nations Security Council resolutions. But these negotiations are not possible while the constituency of one negotiating party is subject to terror, murder, and flight.