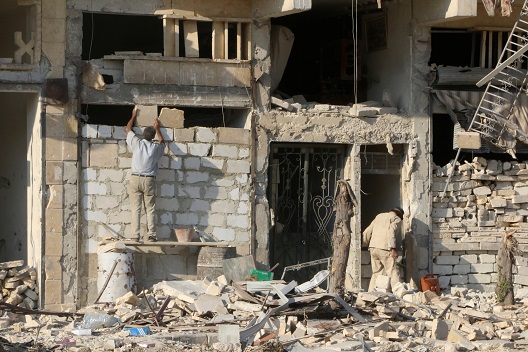 Photo: A man rebuilds a wall of a damaged building in the rebel held al-Katerji district in Aleppo, Syria August 13, 2016. REUTERS/Abdalrhman Ismail

Few major implementors currently exist in Syria developing and executing projects to rebuild the destroyed infrastructure ranging from roads, buildings, healthcare system, agriculture and irrigation systems, to the electrical grid. Though a number of reasons limit the existence of project implementors, the primary reason is the ongoing conflict and lack of stability. A lack of infrastructure is also a major barrier for entry for many implementors whose aid deliveries depend on secure roads and bridges. Despite all this, there is a major player on the ground that has implemented projects across non-government controlled parts of Syria throughout the conflict amid all the uncertainty and chaos and that is the Syria Recovery Trust Fund (SRTF).

The SRTF is a multilateral fund seeded by Germany, the United Arab Emirates and the United States along with several European partners as well as Japan, Kuwait, Turkey, and Jordan; its mission is focused on recovery and rehabilitation projects in opposition-controlled territories. With the changing landscape of the conflict, it has had to adapt and redirect its efforts which—due to its nimble and flexible operational method —it has done more effectively than the World Bank and UN in similar situations. However, with the unresolved conflict in Syria, the SRTF expects to continue to adapt to the changing landscape in order to continue serving its primary constituents, the Syrian people. So far, the SRTF manages projects worth over 130 million Euros inside Syria despite lacking a precedent for doing so, but it remains to be seen how it will adapt to a scenario where the regime could possibly take full control of the opposition territories.

The SRTF has a relatively light footprint inside Syria, which is the way Director General Hani Khabbaz likes it. He prefers to focus his energies on supporting and strengthening the capacity of eligible Syrian implementing organizations inside Syria—local councils, municipalities, public service providers and utilities and local, regional, and national public administrative entities—and meeting the varying and often conflicting demands of his primary stakeholders, Syrians affected by the conflict.

The SRTF started operations in 2013 after the signing of its Framework Agreement—the SRTF establishing document that details what and how activities will be funded and implemented and outlines the SRTF governance and management arrangements as well as its detailed operational modalities. The Fund’s projects vary greatly between regions—the areas of focus have included the southwest, northwest, and more recently the northeast. After the opposition in the Southwest ceded control to the regime in July 2018, the SRTF suspended projects in Quneitra and Daraa and is redirecting its focus to other regions. Some institutions supported by the SRTF in the southwest continue. However, some local officials and Civil Society Organizations (CSOs) remain the same despite area control nominally reverting to the Assad regime.

The Northwest comes with its own complications. Turkish presence and control resulting from its Euphrates Shield operation eased access and implementation of projects in the Turkish-held Euphrates Shield area. On the other hand, the SRTF suspended all projects in Idlib and western Aleppo over the last eighteen months due to the strong presence of designated terrorist organizations in Idlib and the threat of a large-scale regime offensive. After a Russian-Turkish deal staved off an immediate attack and agreed to a demilitarized zone, the STRF continues to monitor the situation and will consider reactivation of projects if the circumstances allow and SRTF eligibility criteria is met. However, the deal is contingent on the removal of heavy weapons and extremist groups including Hay’at Tahrir al-Sham (HTS). The deadlines for these removals have passed without being met, and though Russia and Turkey have agreed to allow more time for the deal’s implementation, the regime is more difficult to manage. In the case of all-out escalation in Idlib, stabilization projects would be delayed even further.

The recent shift to Northeastern Syria is in large part due to the United States’ commitment to a more semi-permanent presence in the region—for the next year at least—thanks to the recent delivery of $100 million in funding from Saudi Arabia to maintain US stabilization operations, as well as $50 million committed by the UAE. Because the funding was a direct transfer to the US Treasury, established US implementation mechanisms will remain in place. With partnerships with USAID and the US Department of State, the STRF projects are more likely to endure. These projects include direct support to households, support to the health sector, and revitalization of agricultural livelihoods very much needed in the region; especially in Raqqa province. Projects benefiting from the expertise of both local and international NGOs are more likely to succeed and to be renewed, which is not as common in other parts of Syria. It is a necessary limitation and aspect of implementation projects. Local Syrian partners often lack the expertise in large scale infrastructure projects, as the bulk of knowledge, service providers, and decision-making was previously highly centralized in Damascus.

Staff and partners are thoroughly vetted by the SRTF and the needs remain concentrated in local communities, as the regime has neither the financial ability or will to repair the destruction in areas outside of its control. One aspect of the SRTF that allows its responsiveness and flexibility is the short length of its stabilization projects in Northeast Syria, usually set around six months. The short length is purposeful as it allows the organization to reassess the dynamics of the conflict which continue to evolve as well as to monitor how changing conditions affect implementation projects.

The SRTF staff members are spread out across Turkey and Jordan with dozens of local staff based inside Syria. Turkey and Jordan are members of the SRTF governing bodies, as both are host countries that have a vested interest in seeing a revitalized and peaceful Syria to ease the burden of Syrian refugees on their economy and resources.

The SRTF’s small team is relied on by many international stakeholders to make gains towards a big goal: stabilization in Syria. By facilitating a return to normal life in war-torn areas through livelihood assistance, local economic development, and small-scale reconstruction, stakeholders in the Syrian conflict hope these programs might encourage refugee returns, diminish radicalization, and contribute to the stability of the region. As the conflict enters a new phase, relief and recovery programs will have to adapt, but they are sure to remain a vital component of the international community’s strategy in Syria.

Reema Hibrawi is the editor for Rafik Hariri Center blogs and the associate director for the center.