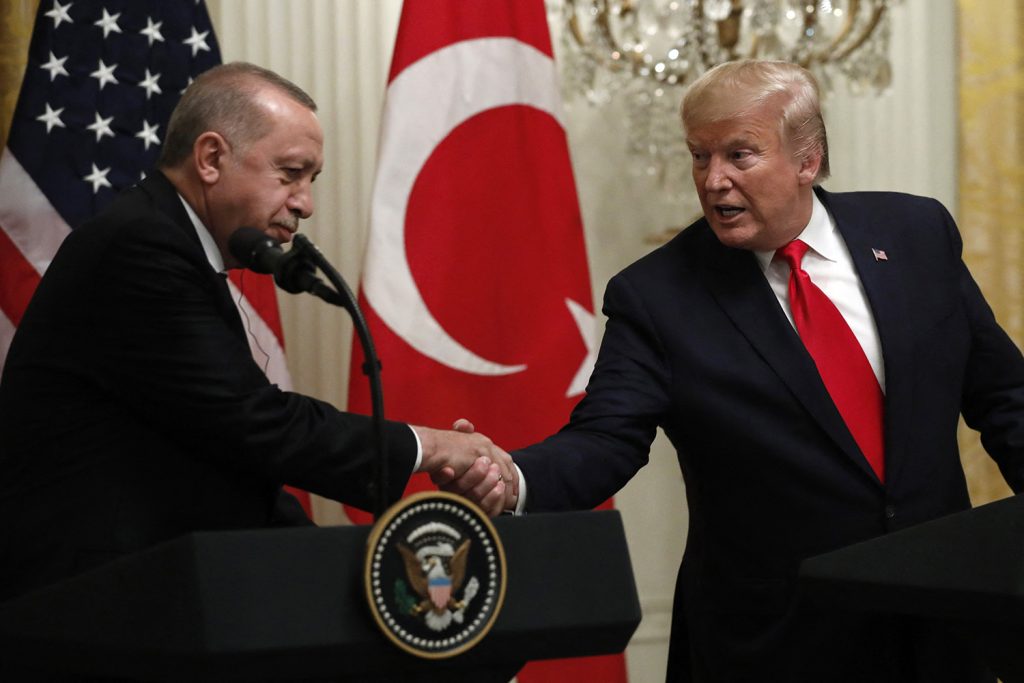 It has long been the shared wisdom of foreign policy professionals that the US-Turkish relationship is pivotal to international peace and stability. The underlying assumptions of that wisdom are still largely valid but, in recent years, the relationship has been overtaken by politicized analysts, flawed transactional policies, and populist politics. While former US President Barack Obama characterized the relationship as a model partnership as recently as 2009, today, the relationship seems to exist almost solely at the executive level between US President Donald J. Trump and Turkish President Recep Tayyip Erdoğan.

On an institutional level, Turkey’s relationship with the Pentagon and the State Department, while traditionally strong since Turkey’s ascension to NATO in 1952, has been deteriorating since a March 2003 vote by the Turkish parliament. On that day, contrary to the expectations of both governments, Turkey’s parliament refused to allow a US troop deployment in Turkey to launch a northern front into Iraq. On the other hand, Turkey’s security and foreign policy bureaucracy has been traumatized by the Obama administration’s reluctance to show firm leadership regarding Syria, despite self-declared redlines being defied with impunity by Bashar al Assad.

President Erdoğan’s political success on the domestic front has also resulted in ill-advised regional ambitions putting Turkey at odds with the United States, most notably on Hamas, Iranian sanctions, and Egypt.

To return the favor, the United States has systematically ignored legitimate concerns of Turkey with regard to the continuing residence of Fetullah Gulen in the United States. That indifference reached a climax on July 15, 2016, when Gulen’s followers were involved in a coup attempt in Turkey.

Perhaps the largest erosion of trust has taken place on a societal level. Leaving Turkey to deal with four million Syrian refugees, the United States engaged in a transactional alliance with the People’s Protection Units (YPG)—the Syrian branch of the Kurdistan Workers’ Party (PKK), which both Turkey and the United States have designated as a terrorist organization—to fight against the Islamic State. The images of US troops wearing YPG badges that surfaced in 2016 silenced even the most prominent friends of the United States in Turkey. US officials have admitted publicly that the YPG was re-named as the “Syrian Democratic Forces” to distance it from the PKK, an act that further fuels anti-American sentiment among Turks.

To make matters worse, the controversy regarding US accusations and claim that a publicly-owned Turkish bank, Halkbank, evaded US sanctions against Iran has negatively affected the way financial markets view Turkey.   While the Halkbank controversy continued to make headlines, the plight of an evangelist pastor arrested in 2016 on charges of aiding terrorist groups in Turkey started gaining more and more attention among influential officials in Washington. After a misunderstanding between President Trump and President Erdoğan during a NATO summit in the fall of 2018 about his release, President Trump threatened to ruin the Turkish economy through his Twitter account. Markets reacted by catapulting Turkey into a currency crisis that still resonates.

While the list of disagreements and issues is long, most can actually be resolved rather quickly. However, the single most important obstacle to an opportunity to rebuild this pivotal relationship is Turkey’s procurement of a Russian missile defense system, the S-400. It is rare to find the entire foreign policy community in the United States united but even American friends of Turkey rallied against Turkey’s purchase of a Russian system. For now, the system has only been partly delivered, and the COVID-19 pandemic offers a welcome excuse to delay installation of the system. However, it remains the single most important and difficult to overcome obstacle to a normalization in relations between the two countries.

Fears that the S-400 might compromise the state-of-the-art F-35 program resulted in the suspension of F-35 deliveries to Turkey that have already been paid for, as well as the unilateral removal of Turkish single-source suppliers from the F-35 supply chain. Recent technical reports confirming Turkey is an indispensable partner in the F-35 program, caused President Trump to complain during a cable news appearance that the supply chain of the historically expensive fighter jet is in jeopardy.

The silver lining here is that Turkey has gained more credibility as a reliable supplier that could replace China as supply hub. US companies, most notably Walmart, have already placed orders for packaging materials with dozens of Turkish manufacturers. Research commissioned by the Turkey United-States Business Council (TAIK), shows that liquified natural gas imports from the United states, which have already quadrupled in recent years, are likely to increase further while a significant boost in agriculture imports is also expected. A substantial increase in bilateral economic activity could provide a much-needed incentive to invest in rebuilding the political relationship. Despite the positive trends, a meaningful increase is only possible if the United States can offer long-term export financing. In the midst of the economic turmoil created by COVID-19, it certainly looks like the stars might be aligned to do just that.

Notwithstanding the litany of current disagreements, Turkey leverages every opportunity to evidence how much it appreciates its relationship as an integral ally of the United States. In the midst of the pandemic, Turkey arranged for a voluminous cargo shipment to the United States of half a million surgical masks, 40,000 hazmat suits and 2,000 N-95 masks, among other much needed medical supplies. Often, even these humanitarian actions are met with skepticism by Turkey’s antagonists, but the Trump administration seems to realize that this is not the time to challenge allies to friendship contests. As Matthew Kroenig of the Atlantic Council commented at a recent event on May 18, “This is a time to keep allies as allies.”

Namık Tan is the former ambassador of the Republic of Turkey to the United States. Follow him on twitter @NamikTan

Image: US President Donald Trump shakes hands with Turkish President Recep Tayyip Erdogan at their joint press conference at the White House in Washington on November 13, 2019. Photo by Yuri Gripas/ABACAPRESS.COM