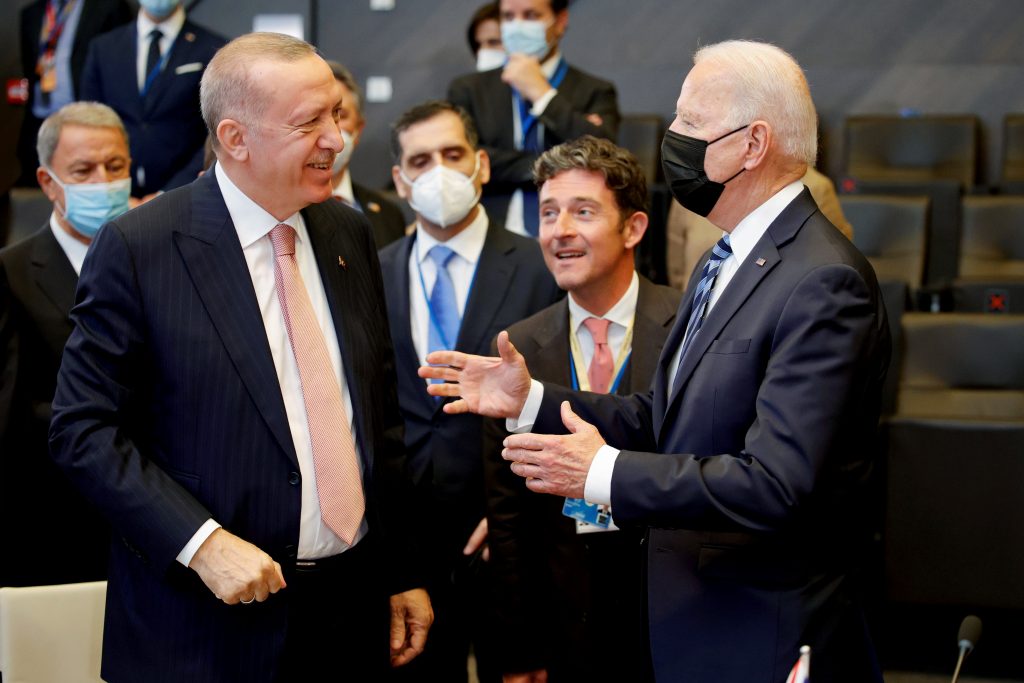 On June 14, on the sidelines of the NATO Summit in Brussels, US President Joe Biden and Turkish President Recep Tayyip Erdoğan held their first in-person meeting since Biden’s election. But it was far from their first encounter; Biden and Erdoğan have known each other for years, meeting on several occasions during Biden’s tenure as vice president.

Speaking after its conclusion, Erdoğan described the meeting as “fruitful and sincere,” saying the two leaders discussed the differences between the two countries as well as areas of cooperation. The topics covered reportedly ranged from Afghanistan and Syria to defense issues and bilateral trade.

Below, Atlantic Council experts offer their take on the significance of the meeting and what it signals about where US-Turkey relations are headed next.

Defne Arslan: A dialogue channel has officially been opened

Jomana Qaddour: Fundamental disagreements remain, but don’t miss the signals of a desire for improved relations

Irfan Nooruddin: The US can’t go back to business as usual with its partners

A dialogue channel has officially been opened

Today’s meeting between President Biden and President Erdoğan is a positive first step and a sign that the leaders of both countries understand the importance of the bilateral relationship.

I am very encouraged by President Erdoğan’s remarks following his meeting with President Biden. It looks like they had the opportunity to discuss topics of mutual interest as well as issues of disagreement. The most important outcome of this meeting is that a dialogue channel has been opened, and both sides reiterated their mutual dependence on each other as NATO allies.

The United States is a global superpower and Turkey’s most important ally, while Turkey is an increasingly important regional player and the only NATO ally in the Middle East that is also pushing back against Russian influence and adventurism across the region.

If the US and Turkey can come to an understanding or set aside their complicated differences, including on the S-400 missile system and F-35 program, it can open the door for deepening cooperation on Iran, Ukraine, the Caucasus, Libya, Syria, and Afghanistan—and on enhancing their economic partnership, from investment and trade to energy.

— Defne Arslan, director of the Atlantic Council IN TURKEY program

Personal dynamics can provide a basis for bilateral breakthroughs

Rather than yielding breakthroughs on specific disputes, this initial meeting between Presidents Biden and Erdoğan was instead a chance to establish personal chemistry.

This is no small achievement. Personal chemistry between national leaders can prove crucial in cutting through long-entrenched bureaucratic and political positions to generate new and positive momentum in bilateral relations.

Hopefully, the revitalized personal connection between Biden and Erdoğan will now facilitate progress on issues such as maritime boundary disputes in the Eastern Mediterranean; bolstering Ukraine’s defenses; deterring further Russian military adventurism from Libya and Syria to the Black Sea and South Caucasus; and Afghanistan.

And after generating positive momentum on these issues, maybe Erdoğan and Biden can return to more intractable issues, such as Turkey’s purchase of Russia S-400 air defense systems and US partnership with the YPG militia in Syria.

Granted, even after this positive personal meeting with his Turkish counterpart, President Biden will initially face strong political opposition in Washington to embracing Turkey again as a strategic partner.

But if President Erdoğan can contain his disappointment should President Biden not YET be ready to declare a “new era in Turkey-US relations,” warmer personal relations between the two national leaders can lay the foundation for serious diplomatic work in a new spirit of cooperation rather than confrontation.

Fundamental disagreements remain, but don’t miss the signals of a desire for improved relations

The June 14 meeting between Presidents Biden and Erdoğan has not dramatically altered the nature of the Turkish-American relationship, which remains strained on a number of important files. However, in recent months, signals on both sides seem to indicate a desire to find a less combative path forward.

In late May, US Deputy Secretary of State Wendy Sherman became the highest-level Biden administration official to travel to Turkey, visiting in advance of NATO talks to lay the groundwork for the Biden-Erdoğan meeting. In early June, US Ambassador to the United Nations Linda Thomas-Greenfield visited the Turkish-Syrian border, praising Turkey for hosting 6 million refugees and making clear that Turkey and the United States were mutually committed to ensuring the delivery of humanitarian aid from Turkey to 3.5 million people in Idlib, Syria even if Russia vetoes reauthorization of the only remaining UN aid corridor into Syria through Turkey at the UN Security Council this July.

The impetus for improved relations also lies in the fact that the United States is in search of a reliable and strong crisis-management partner in the region that is able to exert influence in troubling contexts—a role that Turkey may be poised to play in theatres such as Ukraine, Libya, and Syria.

Unfortunately there are many outstanding issues that will continue to create unease for the relationship, including the fact that US support for the Syrian Democratic Forces (SDF) remains at odds with Turkish national-security concerns given Turkey’s allegations of SDF-PKK ties.

It will take time, creative engineering, and a genuine willingness from both sides to move the Turkish-American relationship to a more positive place. Even then, however, it is not clear that the relationship will revert back to what the United States and Turkey have historically shared.

Biden’s bilateral meeting with Turkey’s Erdoğan on Monday made plain just how much damage Donald Trump had on American foreign influence. Biden’s mantra might be that America is back at the table. But, like an estranged relative finally returning to Thanksgiving dinner after years of rude behavior, America is realizing that time didn’t stand still and that offering former partners a black-and-white choice between it and its old-new enemies (Russia and China) won’t fly. Biden has limited tools with which to induce a change of heart in this NATO partner. It’s smarter to abandon the pretense, to focus instead on engaging Turkey so that it is a responsible partner in supporting NATO’s efforts in Afghanistan, and to encourage Ankara to use its regional influence to stimulate economic and infrastructural connectivity through Central and South Asia. A stable and economically prosperous neighborhood for Turkey should not be a zero-sum prospect for Washington.

The new Libyan leadership’s early moves on the international stage demonstrate its openness to engaging with all actors. Interim Prime Minister Abdel Hamid Dbeibeh’s government’s closest and most important international partner is Turkey, which, driven by strategic interests has continued to support the internationally recognized Libya government.