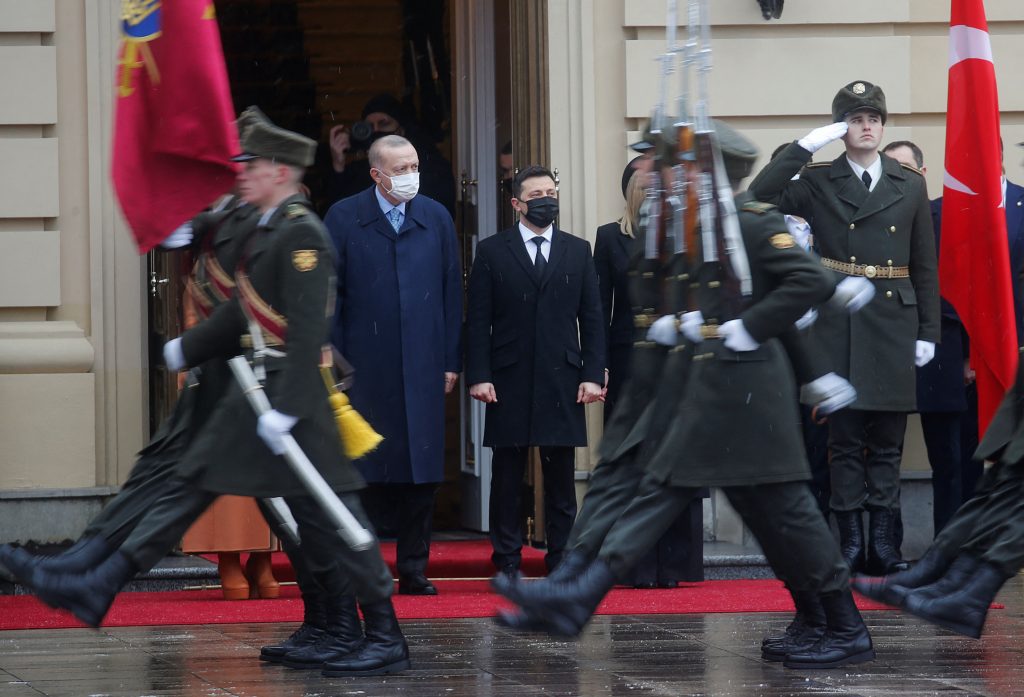 With Russia’s invasion of Ukraine, war has broken out between two of Turkey’s partners to the north across the Black Sea. Turkey had been actively pursuing a diplomatic solution to forestall a conflict that will have serious ramifications for its relations with both countries, within NATO, and regional security concerns.

The Atlantic Council IN TURKEY asked experts for their take on Turkey’s stance and reaction to the conflict, as well as the role of the Turkish Straits and effects of the conflict on Turkish and European energy security.

James F. Jeffrey: Turkey’s diplomatic support is crucial for NATO in this crisis

Debra Cagan: Russian gas flows to Turkey amid a global shortage that may spark development

Turkey’s diplomatic support is crucial for NATO in this crisis

Turkey has reacted strongly throughout the Ukraine crisis. Once fighting started, President Recep Tayyip Erdoğan stated, “We find military action unacceptable and reject it. This step, which we see as contrary to international law, is a heavy blow to the peace, tranquility, and stability of the region.” All parties in the Turkish Parliament agreed formally that Russia’s military operation against Ukraine is wrong, and that Ukraine’s territorial integrity should be ensured, and the Ministry of Foreign Affairs official statement begins: “We consider the military operation launched by the Armed Forces of the Russian Federation against Ukraine unacceptable and reject it.”

This response is not unexpected. Turkey is by far the strongest of the six NATO frontline countries facing Russia and has major geostrategic interests at risk. Ukraine, with its territory across the Black Sea and significant armed forces, was a “buffer” between Turkey and Russia. That buffer may now be gone. Turkey has extraordinary diplomatic, military, and economic strengths that make it a key NATO member in this challenging situation. But its dependence on Russian gas and other trade raise questions about how Turkey may respond if placed under pressure by Vladimir Putin. In any case, it is hard to imagine success for NATO in this crisis without at least diplomatic support from Turkey.

Given that situation, it is Washington’s responsibility to coordinate closely and creatively with Turkey. The United States and Turkey have been at loggerheads on secondary issues for years, and that has had a negative impact on relations, especially at high levels. Now, in the midst of this truly dramatic challenge to the Alliance, where Turkish interests and policy are aligned closely with Washington’s, it is time to put aside these ultimately minor problems. The United States should strengthen Turkey’s military, beginning with its recent F-16 request, and develop common diplomatic-security approaches for NATO’s southeastern flank.

—James F. Jeffrey is chair of the Middle East Program at the Wilson Center, and former ambassador to Iraq and Turkey and former Special Envoy to the Global Coalition to Defeat ISIS

Ankara weighs a request to close the Turkish straits

Turkey’s initial reaction to Russia’s attack on Ukraine was that Moscow’s decision and stance were unacceptable and rejected. In a phone call with President Volodymyr  Zelenskyy, President Erdoğan said that “Turkey stands against any decision targeting Ukraine’s sovereignty,” and conveyed a message of support to Kyiv. Subsequently, Ankara received Ukraine’s official request to close the Turkish straits to Russian ships.

The Montreux Straits Convention of 1936 regulates the passage of warships through the straits and gives Turkey complete control. The convention includes a number of foundational regulations on the transition of riparian or littoral and nonriparian countries during times of peace and war. In this context, Turkey has the right to close the straits or limit crossings if it feels threatened by war or is a party to the war. The agreement also includes provisions for closing the straits to ships of warring states in the event of war. In cases where Turkey is not a warring country, the crossing will be closed to the vessels of the warring states, whether they are riparian or not. The exception is the return of ships to their main ports and the passage of ships tasked with implementing aid and coercion measures.

Taking Kyiv’s request into account within this framework, Turkey may decide to close the straits to Russian ships. This decision would obviously disturb Russia politically. Although Russia already has an effective force in the Black Sea, including submarines, it would see a future shutdown decision as evidence of Turkey’s negative attitude toward Russia. In this circumstance, Russia can take a wide range of actions, from discussing the Montreux agreement to taking initiatives to annul it. This situation would be a serious problem for Turkey, which sees the convention as a basic founding agreement and a kind of safety valve. It can be argued that Ankara will want to avoid this. My guess is that given the relatively weak responses from Western actors, Ankara will announce its decision by waiting a while longer to follow the developments of the process.

However, even if Turkey decides to close the straits to Russian ships, this would not affect NATO warships. First, NATO is not belligerent; second, Romania and Bulgaria are littoral states, so they can’t be limited. Let’s not forget that nonriparian states are subject to a different limitation. Therefore, a total closure of the straits is not possible, the closure would only affect Russia and Ukraine, but Ukraine has no ships. On top of all of these, there is no formal declaration of war so far, and even if there was, I don’t believe Turkey would interpret the Montreux Convention in that way.

—Mitat Çelikpala, professor of international relations and dean of the Faculty of Economics, Administrative, and Social Sciences at Kadir Has University in Istanbul

Turkey is positioned to play a meaningful mediation role

For several weeks, President Erdoğan and Foreign Minister Mevlüt Çavuşoğlu have been offering Turkey as a potential mediator between Russia and Ukraine. President Zelenskyy consistently welcomed this offer as part of his increasingly desperate search for any way to derail President Putin’s planned invasion. While Kremlin spokesman Dmitriy Peskov (a Turkey specialist who began his diplomatic career in Ankara) initially rejected the offer, the Kremlin subsequently reversed course and said Turkey’s mediation might be useful if it resulted in Ukraine coming into compliance with the Minsk Protocol (despite Russia being in serious breach of the same agreement). Putin, however, clearly favored military escalation rather than mediation, consigning the Minsk agreement to the dustbin of failed European diplomacy.

Unlike Germany and France, co-leaders of the Minsk process, however, Turkey has a centuries-old history of confronting and cooperating with Russia. Ankara has been an outspoken supporter of Ukraine’s territorial integrity and a critic of Russia’s annexation of Crimea and developed a significant program of cooperation with Kyiv on military technology, while also retaining effective relations with Russia on energy, agricultural trade, and tourism as well as some key defense technologies (e.g., S-400 air defense systems). It is therefore possible Turkey could have a meaningful mediation role to play once Putin finishes his illegal and unprovoked invasion of Ukraine, which the Russian president will use to strengthen Russia’s position in the political negotiations that will come at the end of this war in Ukraine, as happens with all military conflicts.

—Matthew J. Bryza is a nonresident senior fellow at Atlantic Council’s IN TURKEY program, the Global Energy Center, and Eurasia Center. He is also a former US ambassador to Azerbaijan and former deputy assistant secretary of state for Europe and Eurasia.

Russian gas to Turkey, unlike the slowdown of gas through Nord Stream 1, continues unabated. Neither the gas nor the price has been affected as yet by Russia’s invasion on Ukraine because it is part of a long-term, recently concluded contract between Russia and Turkey. However, Erdoğan’s very strong statement on Ukraine may give pause to Putin. Turkey is one of the very few NATO countries with the military wherewithal to pose a threat to Russian operations in the Black Sea. Were Turkey to decide to play a more significant naval role, this accommodation with Russia may change.

There are some limited alternatives in the short term, in the midst of a global gas shortage, but longer-term expansion of the southern gas corridor and exploiting assets in the Eastern Mediterranean may have renewed interest. The last few years saw little inclination to develop these resources because interest in developing new gas finds and extending the reach of older ones was limited by expectations that the transition to renewables would occur much faster. Now that gas is being widely accepted as a longer-term transition fuel, pursuing these other options makes more sense. However, until Turkey and the other countries in the East Mediterranean come to some agreement on the boundaries of exclusive economic zones, companies will avoid investment in projects that may be subject to boundary disputes.

Experts react: The key takeaways from the Erdoğan-Putin meeting

Turkish President Recep Tayyip Erdoğan and Russian President Vladimir Putin met in-person in Sochi, Russia for the first time since the beginning of the COVID-19 pandemic. Atlantic Council experts give their take on the outcome.