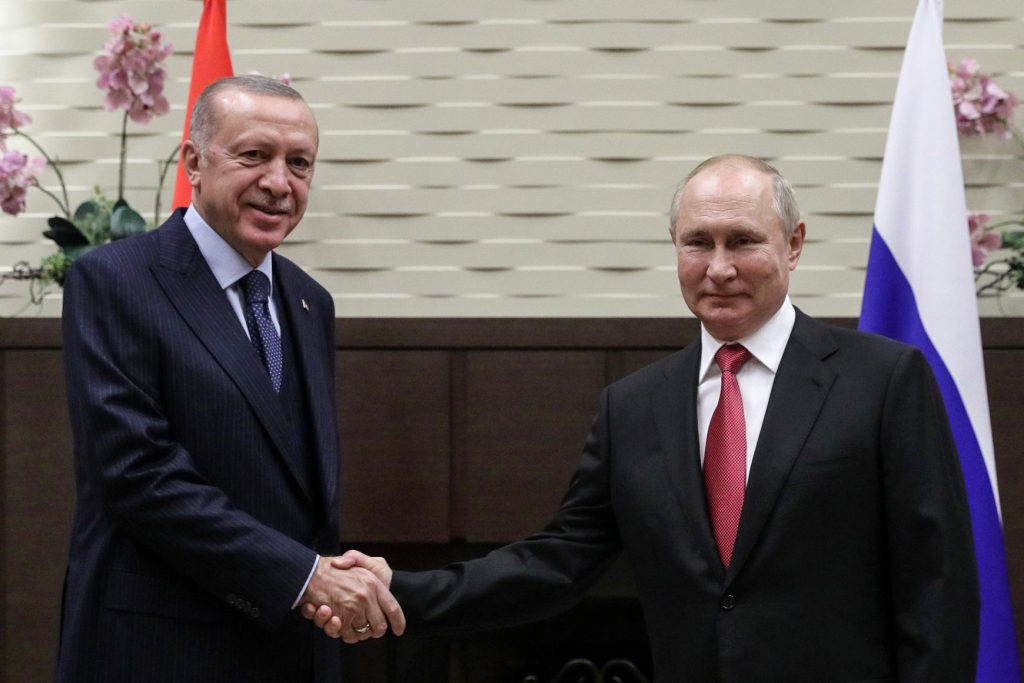 Turkish President Recep Tayyip Erdoğan travelled to the Russian Black Sea city of Sochi this week for his first in-person meeting with Russian President Vladimir Putin since the start of the pandemic. During closed-door talks that lasted nearly three hours, the two leaders discussed bilateral cooperation, including on trade and defense, as well as regional issues such as Syria—where a fragile ceasefire brokered by their two countries in March 2020 has shown signs of unraveling over recent months.

As these two regional heavyweights navigate their thorny relationship, Atlantic Council experts weigh in on the implications of the meeting:

James F. Jeffrey: Absent US support, Turkey’s position in Syria is under threat

The Putin-Erdoğan meeting in Sochi did not resolve Russian-Turkish differences over Syria, but did seem to prevent them from getting any worse. For Putin, relations with Erdoğan have long amounted to a balancing act between opposing Turkish moves that threaten Russian interests in Syria, Libya, the Armenia-Azerbaijan arena, and Ukraine on the one hand and avoiding inducing Erdoğan to reverse his hostility toward America and Europe (which Putin wants to encourage) on the other.

Instead, this meeting seemed to indicate that Putin now sees the process of deteriorating relations between Ankara and the West as having progressed to such an extent that Moscow no longer needs to make any significant concessions to Turkey in Syria or elsewhere. Indeed, Erdoğan’s determination to purchase more Russian S-400s—and perhaps other Russian weapons systems, despite the likely application of US sanctions as a result—has reduced Putin’s need to accommodate Turkish interests in Syria.

Now, the danger for Putin is that he might become overconfident in his belief that Erdoğan needs him more than he needs Erdoğan. After all, Erdoğan is capable of harming Russian interests despite his estrangement from the West. Two recent factors of Erdoğan doing so were Ankara’s support for the official government in Libya against the Russian-backed forces of General Khalifa Haftar, and its support for Azerbaijan in that country’s war against Armenia. Stoking Erdoğan’s ego by meeting him—when Biden would not at this month’s UN General Assembly—is definitely worthwhile for Putin.

—Mark N. Katz is a nonresident senior fellow with the Atlantic Council’s Middle East Programs and a professor of government and politics at George Mason University’s Schar School of Policy and Government.

Absent US support, Turkey’s position in Syria is under threat

The September 29 Sochi meeting between presidents Erdoğan and Putin is the latest in a series of bilateral meetings particularly focused on Syria. The key issue was the northwest Syrian enclave of Idlib, home to more than three million Syrians fleeing President Bashar al-Assad, Syrian opposition forces, the terrorist organization Hayat Tahrir al-Sham, and Turkish forces, all sharing the goal of keeping Assad’s forces out. There has been, apart from a breakdown in 2020, a ceasefire in Idlib since mid-2018, the centerpiece of the freezing of the Syrian conflict since then. But Turkish leaders made clear they feared this Sochi meeting would be different, with Russia pushing for either a Turkish and opposition withdrawal from southern Idlib, or a new Russian-supported Assad offensive.

The two sides’ bland post-meeting comments do not document anything so dramatic, but what was new in this meeting is the role of the United States. The Idlib ceasefire resulted from US diplomacy supporting Turkey’s and Israel’s military actions in Syria, and keeping US troops there, to pressure Russia and Assad for a comprehensive compromise settlement of the conflict. But the Biden administration, while supposedly still “reviewing” Syria policy, prioritizes a minimalist approach focused on fighting the Islamic State and humanitarian assistance. Russia appears to have a green light, as seen with the collapse of another ceasefire in Dara’a in the southwest, to pursue its goals no longer restrained by Washington. The next weeks could see dramatic change in Syria—and not for the better.

—James F. Jeffrey is chair of the Wilson Center’s Middle East Program. Previously he has served as US Ambassador to Turkey, US special representative for Syria engagement, and special envoy to the Global Coalition to Defeat ISIS.

The September 29 meeting between Erdoğan and Putin occurred amidst significant tension between Turkey and Russia on several security matters. In Syria’s Idlib province, Turkish drone and artillery strikes brought Russian- and Assad-regime troops to a standstill in March 2020, and then did the same in Libya two months later. Moscow and Damascus may now be planning to resume their offensive, which could generate new flows of refugees toward Turkey, where four million refugees, mostly Syrian, have already found shelter. Meanwhile, Moscow has been expressing dismay with Ankara’s growing cooperation with Ukraine on military technologies.

Putin and Erdoğan avoided public comment on these differences in Sochi, highlighting economic cooperation instead. Putin announced that bilateral trade between Russia and Turkey had increased 55 percent during the first nine months of 2021. He also underscored the reliability of Russian natural-gas shipments to Turkey. Erdoğan, meanwhile, hailed next year’s opening of a Russian-built nuclear-power plant in Turkey.

Underlying this economic cooperation, of course, is Putin’s desire to drive a strategic wedge between Turkey and its NATO Allies, especially the United States, as evidenced by Moscow’s sale of S-400 surface-to-air systems to Ankara.

But Turkey can only drift so far, relying heavily on NATO to deter aggression by the country against which it has fought more wars than any other country dating back to the Ottoman Empire.

Still, the announcement in Sochi that Russia and Turkey will collaborate in developing submarine and jet-engine technologies is significant, especially for Black Sea security. Whether Erdoğan views this new area of military technological cooperation with Russia as a means to balance Turkey’s similar collaboration with Ukraine or whether it marks a more significant shift in Ankara’s strategic calculus remains to be seen.

—Matthew J. Bryza is a nonresident senior fellow at Atlantic Council’s IN TURKEY program, the Global Energy Center, and Eurasia Center. He is also a former US ambassador to Azerbaijan and former deputy assistant secretary of state for Europe and Eurasia.

The threat of congressionally mandated sanctions under Section 231 of the Countering America’s Adversaries Through Sanctions Act failed to deter Erdoğan from procuring S-400 systems for two main reasons. The first was the disconnect between congressional policy, which sought to deter the purchase and then punish the sale, and the Trump administration’s botched efforts to cajole Ankara to reconsider the move by making side deals. The chest thumping of the Hill stood in stark contrast to Trump’s freeform rejection of sanctions he thought were designed to box him in (primarily on Russia). His message to Erdoğan was not to mind all that. And in the middle stood everyone else, trying to avoid sanctions against a NATO Ally but fully cognizant what the S-400 meant for the F-35 program.

The second is a more academic and frank question about whether financial sanctions writ large can deter a military sale of such strategic importance to the buyer, who faces an unstable Syria, a strengthened Assad, and an unfettered Iran—to a large extent at the hands of the United States. Short of sanctioning Erdoğan himself, congressional policymakers have not internalized the limits of financial-asset freezeson an autocracy determined to test Washington’s ire.

The current US administration’s warning that further acquisition of Russian materiel would trigger sanctions shows Washington’s hands as tied: It’s not good policy, but we’ll do it anyway for lack of alternative. Carefully crafted export-control restrictions limit Turkey’s access to select equipment and protect US and European military and intelligence equities but make Russian contracts even more appealing. Further limiting Turkey’s access to US dollars via swap lines or other measures makes Ankara further dependent on the Gulf countries. There is no winning here.

Expert react: What the Taliban’s takeover of Afghanistan means for Turkey

The Taliban’s takeover of Afghanistan has changed the regional landscape. For Turkey, a NATO member that has made significant contributions to the mission in Afghanistan, here’s what that will mean, straight from our experts.