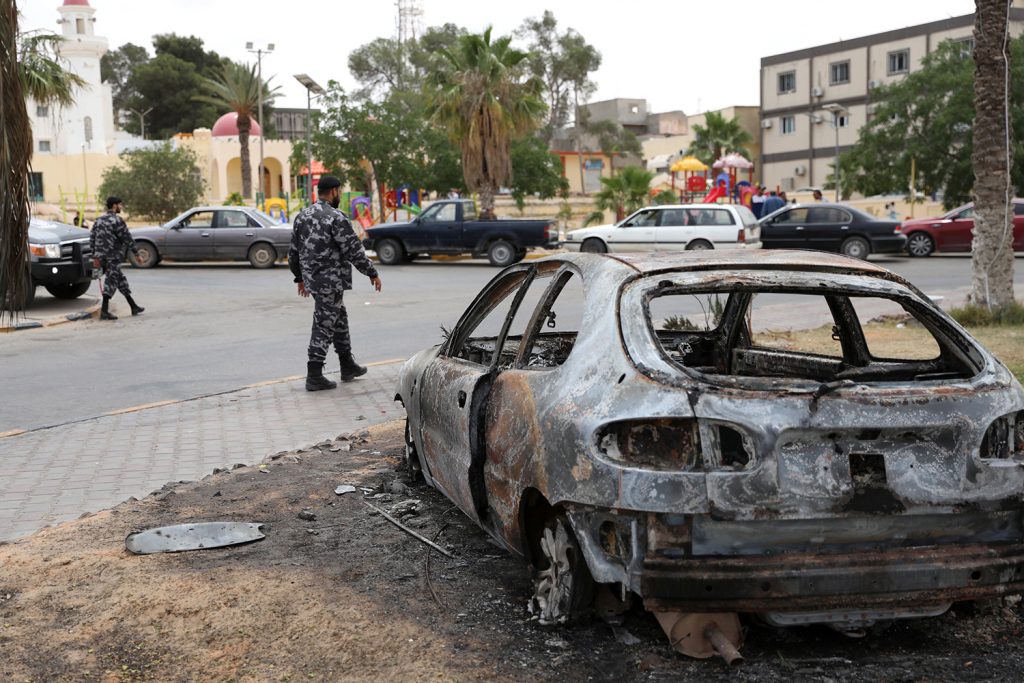 Libya has been mired in violence between competing forces, militias, and jihadists since the toppling of former leader Muammar Gaddafi in 2011. UN efforts to broker peace have failed, so many external actors have entered the fray, supporting different factions based on their understanding that Libya’s future is critical to their economic aims and security.

Strategically located at the crossroads of Africa, the Middle East, and Europe, Libya has fostered a tumultuous environment that has allowed extremist groups, including ISIS, to grow and has compounded Europe’s migration challenge. But the involvement of external actors has exacerbated, rather than resolved, the conflict by providing the warring factions money, mercenaries, and weapons.

Turkey’s strong support for Prime Minister Fayez al-Sarraj’s UN-recognized administration, however, may have at least spared the country from falling into the wrong sphere of influence. But getting to a lasting peace in Libya will require the constructive involvement of all the actors who have a stake in Libya’s future.

While there are many actors active in Libya with different goals, al-Sarraj mainly relies on Turkey, Qatar, and Italy while Libyan National Army (LNA) General Khalifa Haftar enjoys the support of Egypt, the United Arab Emirates, Russia, Saudi Arabia, Jordan, and France.

The challenge now is how to bring together these external and domestic contenders towards achieving a peaceful, secure, and prosperous Libya. It is also critical to avoid security risks posed to European, African, and Mediterranean nations in the neighbourhood and enhance prospects for post-conflict energy development and commercial interests.

The cards in Libya have been reshuffled after Haftar suffered a string of military defeats at the hands of the Sarraj government in Tripoli, with Haftar’s forces ousted from the region. Haftar had been winning the war to take control of Tripoli—until Turkey forcefully intervened with fresh deployments of advanced drones, anti-aircraft batteries, and intelligence support, slowly turning the tide of the battle.

Cooperation between Ankara and Tripoli has shifted the balance of power in the Libyan Civil War, according to Libyan Deputy Prime Minister Ahmed Maiteeq. Turkish military commanders and intelligence officers appear to have a decisive say in the operation center at the Mitiga military academy near Tripoli at present.

Without Turkish engagement, Libya could have easily been seized by Haftar and therefore fallen into his sponsor Russia’s sphere of influence, thus giving rise to a Russian belt in the Mediterranean Sea facing Europe, North Africa, and Sub-Saharan Africa.

Russia is still determined to fill in the strategic vacuum left by the United States and Europe in the region, and covets naval basing on Libya’s coast facing Malta and Italy and next door to Egypt. If this happens, the next logical step would be for Moscow to deploy permanent long-range anti-access area denial capabilities there.

The head of the Russian contact group on intra-Libyan settlement, Lev Dengov, revealed that Haftar asked Russia to build a military base in the country’s east—a prospect that would create very real security concerns on Europe’s southern flank. NATO is seriously worried about such a possibility and seems to favor a Sarraj victory over Haftar.

There has been recent speculation that Russia and Turkey may yet find a deal over the Libyan conflict that would leave Europe and the United States as bystanders. Such a scenario would be a replay of Russia and Turkey’s cooperation in Syria, where Turkish President Recep Tayyip Erdoğan and Russian President Vladimir Putin have developed a personal rapport and have managed a serious divergence of interests.

Europe and US bystanders for now

While the US State Department and the Pentagon have vocally supported the Sarraj government, the White House has repeatedly, if half-heartedly, sided with Haftar in the conflict. However, following Haftar’s latest defeats and rapprochement with Moscow, even the White House appears to be distancing itself from him.

The United States released surveillance imagery purporting to show Russian aircraft operating in Libya to support mercenaries of the Wagner Group and Haftar forces. Washington has accused Russia of deploying dozens of fighter jets in eastern Libyan bases used by Wagner to provide air support to tip the scales in the civil war.

The European Union (EU) has been split—France, despite repeated protestations of neutrality, is seen as preferring Haftar, and has openly dissented with Turkey. Former colonial power Italy supports the Tripoli government and Italian oil and gas company ENI has substantial hydrocarbon interests in Libya. The EU has failed to find a unified approach to the crisis in Libya, despite its proximity to the conflict.

For better or worse, Libya’s close neighbors must bepart and parcel of any settlement by virtue of their common borders. Morocco, Tunisia, Algeria, and neighbors in the south are careful to remain neutral in Libya, in consideration of the risks of heavy involvement in the affairs of a neighbor without knowing the direction the winds might blow down the road.

All are needed for peace

With the post-conflict reconstruction in Libya estimated to be worth around $150 billion, significant opportunities exist for international firms to play a major role in rebuilding the North African country. Therefore, domestic and foreign business groups will likely also be engaged in conflict resolution and ensuing reconstruction.

Russia and Turkey do feature more prominently in the potential for negotiations between their supported factions. However, any agreement to end the Libya crisis would benefit substantially from the support of the United States, EU, and regional neighbors as well. Washington in particular can and should take the lead in mobilizing its NATO and regional allies such as Egypt, UAE, and Saudi Arabia to prevent Libya from turning into yet another Syria.

In order to prevent the continuation of conflict, division, and crisis in Libya, external actors must coordinate to bring the rival parties in Libya to the table and create the conditions for a long-term settlement to benefit the people of Libya. Creating a secure and stable Libya is a necessary precursor for reconstruction and investment and, crucially, building up oil production back to pre-war levels.

Mehmet Öğütçü is a former Turkish diplomat and Chairman of Global Energy Resources Partnership, UK. Follow him on Twitter @mehmetogutcu

As one of its immediate impacts, the pandemic disrupted global supply chains and suppressed economic activities across the world, rekindling discussions about deglobalization. While these discussions do have some merits, declaring the end of globalization would be too naïve—there are still opportunities in competitive countries, like Turkey, for maintaining the globalized economy.