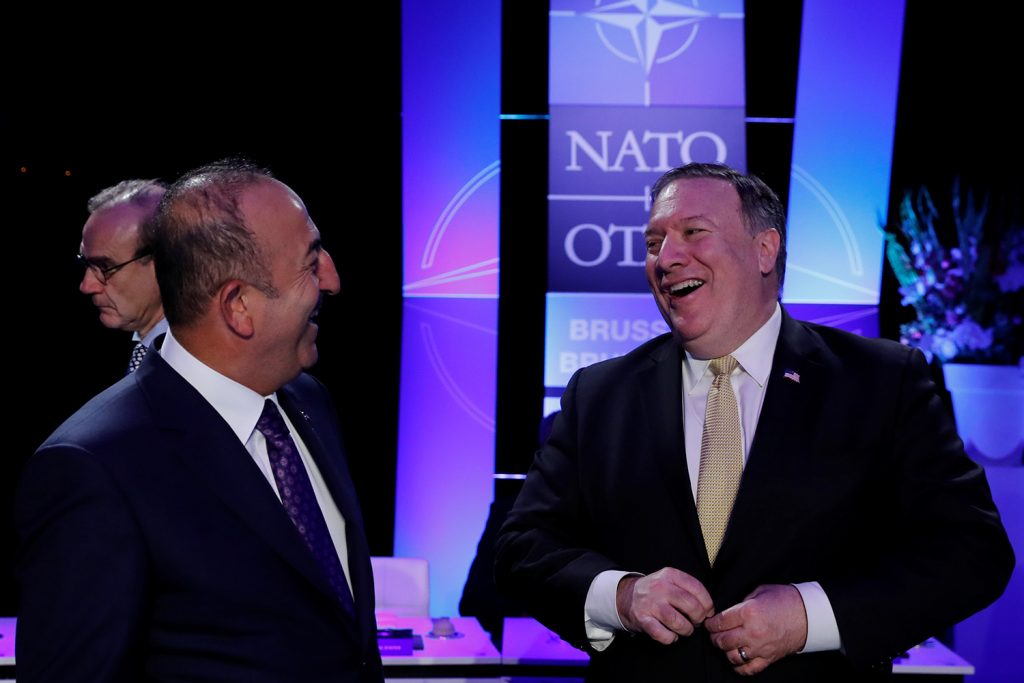 Atlantic Council IN TURKEY’s online blog TURKEYSource(*) launches a short series of blogs based on experts’ independent opinions covering a wide range of topics related to the US-Turkey relations in the context of the upcoming US elections.

In recent years, the US-Turkey relationship has taken its ups and down, punctuated by a series of high-profile disagreements on several issues, and many of the current conflicts remain unresolved.  Despite this,  the two countries have managed to continue their bilateral partnership and dialogue. In addition to a longstanding partnership dating back to the post-WWII era and institutional ties through NATO, during the Trump administration the relationship has been bolstered by close dialogue between US President Donald J. Trump and Turkish President Recep Tayyip Erdoğan.

We asked four experts to share their thoughts on what a Biden-Erdoğan relationship would look like and the implications for the US-Turkey relationship should Biden win in November.

Initially, the exit of President Trump would result in a deterioration in US-Turkey relations. As Bob Woodward describes in his most recent book “Rage,” Trump has spoken to Erdoğan by phone more times than with any other foreign leader. Trump’s admiration for Erdoğan has led to some unexpected twists in US policy toward Turkey, such as Trump’s acquiescence in October 2019 to Turkey’s military operation in northern Syria. Another example has been Trump’s refusal thus far to implement sanctions against Turkey as required by Congress under the Countering America’s Adversaries Through Sanctions Act (CAATSA) in response to Turkey’s purchase of Russia S-400 air defense systems.

Trump’s exit would therefore likely see stronger US resistance to Turkey’s military operations in Syria, with the US Central Command feeling more room for maneuver against Turkey. Indeed, candidate Biden decried Trump’s abandonment of the Kurds in Syria and could be expected to side with Congressional leaders seeking to rein in the Turkish military and reinvigorate support for the People’s Protection Units (YPG/PYD). A President Biden would almost certainly impose CAATSA sanctions stemming from Turkey’s S-400 purchase, unless President Erdoğan sustained his approach in recent months of not activating that missile system. In addition, many in Turkey remember then-Senator Biden’s comments following the second Iraq war suggesting Iraq be divided into separate Kurdish, Sunni, and Shiite cantons, which generated suspicions that Biden might possibly favor a breakaway Kurdish political entity in Turkey, too. Finally, candidate Biden’s personal criticism of President Erdoğan in late 2019 will ensure a rocky start for US-Turkey relations under a President Biden.

In the longer run, however, a Biden presidency would be highly NATO-focused and should therefore recognize Turkey’s intrinsic strategic importance to the United States and the Atlantic Alliance. Turkey, after all, has NATO’s second largest military, and one that is increasingly capable. Turkish troops showed considerably more restraint against Kurdish civilians in northern Syria than many in Washington had expected, while its boots on the ground and drones in the air constrained Russian military adventurism in both Syria and Libya, preventing further indiscriminate attacks on civilians.  Finally, during an August 2016 visit to Ankara, then-Vice President Biden showed sympathy for Turkey’s demand that the US move the YPG militia, linked to the terrorist Kurdistan Worker’s Party (PKK), to areas of Syria east of the Euphrates River.

Matthew Bryza is a senior fellow with the Atlantic Council’s Global Energy Center. He served as a US diplomat for over two decades, including as US ambassador to Azerbaijan and deputy assistant secretary of state for European and Eurasian affairs.

Rough times to continue, regardless of election outcome

Contrary to Turkish analysts, who believe the personal relationship between US President Donald Trump and Turkish President Recep Tayyip Erdoğan helped the relationship between the two countries, I think that the somewhat unusual personal aspect in fact harmed the institutional framework. President Trump’s sporadic, inconsistent, incoherent decisions concerning Turkey together with the false promises he made to President Erdoğan, deepened the distrust among Turkish people towards the United States. The YPG/PYD were equipped with heavy weapons and continued to be the major partners of the United States in Syria under President Trump’s watch. President Trump was the one to introduce harsh sanctions against Turkey because of the continued arrest of US Pastor Andrew Brunson. It was the Trump administration which lifted the arms embargo against Cyprus recently. The personal relationship only deferred the looming crises and swept the growing problems under the rug.

It is no secret that Biden’s national security and foreign policy people are highly critical of President Erdoğan and his policies. It is highly probable that a possible Biden administration would not turn a blind eye to the human rights violations and authoritarian policies of Erdoğan’s government like the Trump administration did. Plus, they would not resist the pressure coming from the US Congress to sanction Turkey harshly if Ankara goes ahead and activates its Russian S-400 missile defense system. However, if President Trump stays in power, the fallout if the S-400s were activated would be inevitable too. Furthermore, the extradition of Gülen and Gülenist networks’ activities in the United States, as well as the diverging positions of Ankara and Washington on Syria, Libya, and the Eastern Mediterranean, carry the potential of undermining that personal relationship between Trump and Erdoğan if Trump wins a second term. One also shall not forget that the criminal case against the Halkbank in the New York court will not simply evaporate.

Cansu Çamlıbel is the Editor-in-Chief of independent online newspaper Duvar English and former Washington correspondent for the daily Hürriyet.

Personal chemistry plays a role, but alignment of national interests is the key

Personal chemistry between the leaders of the United States and other countries certainly is a factor in any bilateral relationship in my experience—but even at their best or worst, the most important relationships typically are rooted more deeply on a complex interdependency of the most obvious national interests. Those usually are national security and prosperity as understood at the popular level and reflected by their popularly elected (or in the case of non-democracies, simply popularly-supported) leaders.  Warm personal chemistry between leaders doubtlessly helps overcome divergent popular calculations of national interests, and bad chemistry will inhibit realizing mutual benefit from convergent interests.  Moreover, real “chemistry” is not static but rather dynamic.  I had the privilege of personally witnessing very warm meetings between then-Vice President Biden and then-rime Minister Erdoğan and other leading Turkish officials, businesspeople, and civil society leaders in Istanbul and Ankara in December 2011.

Francis J. Ricciardone is president of the American University in Cairo and former US Ambassador to Egypt and Turkey.

The relationship is defined by structural challenges, needs to be rebuffed by institutional ties

The next occupant of the White House, Biden or Trump, will be forced to deal with these structural problems and no easy solution exists regardless of how strongly glued the relationship is on a leadership level.

Although good personal relations between two leaders is important, managing a complex bilateral relationship between two Group of Twenty (G-20) members is not feasible without institutional involvement and that is exactly what has been lacking in recent years. Therefore, we need to rebuild the confidence on an institutional level rather than merely focusing on rhetoric from political leaders.

Namık Tan is the former ambassador of the Republic of Turkey to the United States.

(*) The views expressed in TURKEYSource are solely those of the authors and do not necessarily reflect the views of the Atlantic Council, its staff, or its supporters.

What relationship can the US and Turkey have after 2020?

In recent years, relations between the United States and its NATO ally Turkey have seen dramatic ups and downs, and Ankara has started to pursue a more independent foreign policy. Regardless of who wins the US elections, it is important to consider whether the United States and Turkey share enough common interests to facilitate strong cooperation moving forward.

Turkish Black Sea discovery: Is it geopolitics or economics?

While some expect that a Turkish drilling ship’s discovery of the country’s largest natural gas reserve to date will give Turkey a more advantageous bargaining position, the country has already had this leverage thanks to its wide variety of pipeline sources and access to the liquefied natural gas market.

Image: Acting US Secretary of State Mike Pompeo and Turkey's Foreign Minister Mevlut Cavusoglu react as they attend a working dinner at the park of the Cinquantenaire, during a NATO Summit, in Brussels, Belgium July 11, 2018. REUTERS/Yves Herman