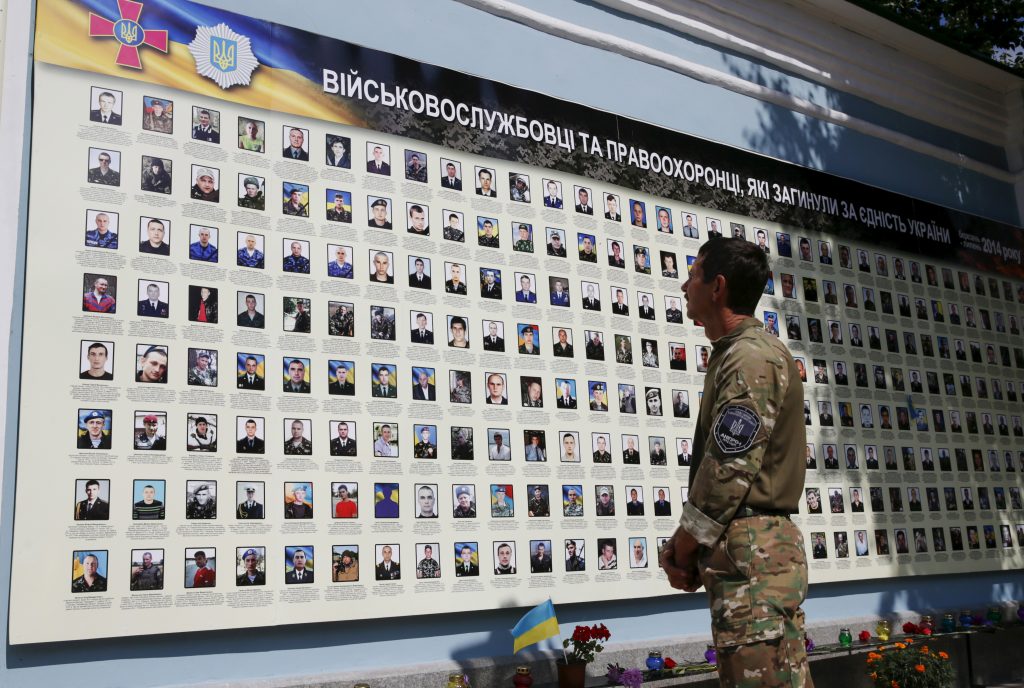 Ukraine’s professional and citizen soldiers are fighting a two-front war. The professional military has grown in capacity and number, although citizen soldiers–the teachers, architects, students, nurses, and doctors who enlist and re-enlist for short-term deployments–still fill its ranks. Everyday citizens recognize that the war in Donbas is a fight for Ukraine’s very existence. These soldiers return from their time in combat to confront another struggle. They must fight the current bureaucracy, part-Soviet and part-reformed, to gain the support they desperately need for their reintegration into civilian life.

As described in a recent Atlantic Council report, The Trip from the Donbas: Ukraine’s Pressing Need to Defend its Veterans, military service in Ukraine today can be a sacrifice of one’s profession, one’s family and community life, and one’s health. Ukraine veterans suffer high rates of suicide. Seventy percent of women who have served on the front are now divorced. Veterans have been denied benefits and employment due to social discrimination, often fueled by Russian-generated disinformation that labels veterans as violent, criminal or fascist. Social services organizations have taken the children of women veterans into care, citing abandonment as women risk their lives at the front.

The situation faced by veterans in today’s Ukraine is not just a human-interest story. The reintegration of veterans must be a priority for Ukraine’s government, its allies, and its NATO partners for three critical reasons: winning the war, democratization, and the possibility of a durable peace.

Many professional soldiers today enter the military because they have few employment options. Alternatively, as citizen soldiers, they serve for a year, return home to preserve their civilian careers, and re-enlist when they are able. If Ukraine established a solid post-service care system, it would retain and attract the best men and women, people who saw military service as a viable profession. At the same time, any increases in retention of the best recruits would strengthen Ukraine’s fighting capability.

Veteran care is also critical to Ukraine’s democratization, a process that is not only about elections, institutions, and political checks and balances. It is about a culture where citizens’ interests and needs are what the government serves. Ukraine’s current veteran system is based on Soviet values and processes, where the state serves to replicate its own existence and favors the ruling, or oligarchic, elite. A good place to start with building a culture of state service is with those citizens who are risking their very lives for a safe and prosperous Ukraine.

Veteran care is central to a key commitment of the Zelenskyy administration, namely a negotiated peace for the Donbas and Crimea. Core to a durable peace settlement is the successful disarmament, demobilization, and reintegration of combatants (the “DDR” process). Ukraine has the opportunity to put that system in place, and to get it right. With a strong veteran services system, Ukraine could come to the table with a viable and trusted DDR process.

In its recently published report on Ukraine’s veterans, the Atlantic Council calls for the government of Ukraine to put in place a strategy for veteran care that reforms the old Soviet-style benefits and subsidies, replacing it with more robust veteran services. Soldiers need access to mental health and rehabilitation, education, and employment services, which will allow them to become productive members of society, rather than the current system of subsidized dependency. The overarching goal of this strategy must be to end the marginalization of veterans and provide them with the resources and support to be productive citizens in, and leaders of, their communities.

This strategy must drive a standard of care across Ukraine’s local governments and communities. Today, in Ukraine’s decentralized system of government, veteran services are paid for and administered locally, so where a veteran lives determines their level of care. The Ministry of Veterans Affairs must establish service and delivery for local governments, and verify that national policies make it to the local level.

Gender equality must be non-negotiable. Women and men have different needs post-service, and women typically come home to greater levels of societal discrimination and barriers to employment. Women at the front often serve in combat positions, although they are prohibited from doing so on paper. Veteran’s care must recognize the reality of women’s service, and not the current fiction that women are at the front only in support roles.

Ukraine’s donor landscape is fractured. NATO, individual national governments, and Ukraine’s robust diaspora communities all give to veteran programs. The Ministry of Veterans Affairs needs to establish an office of strategic partnerships not to control this assistance, but to ensure that it supports Ukraine’s strategic vision for veteran services.

The government of Ukraine must combat the disinformation campaigns targeting veterans that feed social distrust and strengthen Russia’s position in the Donbas conflict. These narratives cast veterans as criminal elements and play into public fears that the war will create a more violent society. These narratives also portray veterans as dependent on state handouts, pitting them against other groups in need. A national, proactive media and education campaign must highlight what veterans really are and underline that their selfless service has allowed most citizens of Ukraine to live in peace while they take on the burden of the conflict.

Finally, the government and Ukraine’s elite must refrain from politicizing veterans as a group. The government must stop insisting on muting veteran voices in the peace process in exchange for sustained support for the new Ministry of Veterans Affairs. Politicians must not seek veteran endorsements for their candidacies without then delivering on political promises. Even in the United States, where politics is highly polarized and highly partisan, veteran affairs remain firmly non-partisan. This must also be Ukraine’s objective.

Lauren Van Metre is a senior advisor for peace, security, and democratic resilience at the National Democratic Institute and a non-resident senior fellow at the Atlantic Council.

Ukraine unveiled a new National Security Strategy in September 2020 that clearly identifies Russia as the enemy and sets out NATO membership as the end goal of the country’s security policy.

Image: A Ukrainian military veteran pays his respects at a memorial wall in central Kyiv dedicated to Ukrainian troops killed in the ongoing conflict with Kremlin forces in east Ukraine. (REUTERS/Valentyn Ogirenko)