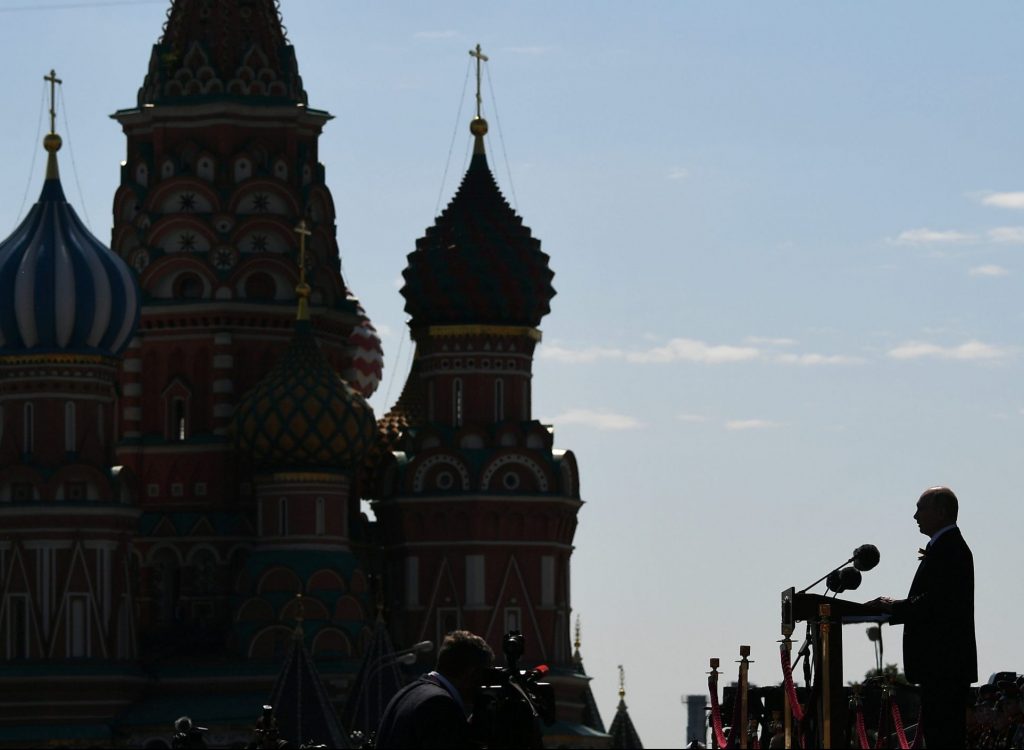 Russian ruler Vladimir Putin is currently in the twentieth year of his reign – and he is not going anywhere. On the contrary, the Kremlin strongman has just staged a fig leaf referendum that will enable him to remain in power until 2036. Tellingly, in the weeks preceding the vote, Putin offered the Russian public no grand vision for the future of the country under his continued stewardship. Instead, the focus was firmly on the idealized past, with a parade celebrating the Soviet victory over Nazi Germany serving as the centerpiece of the entire campaign.

This emphasis on history is nothing new. Throughout Putin’s two decades in power, he has consistently obsessed over perceived historical injustices while placing the rehabilitation of the Soviet past at the heart of both domestic and foreign policy. Many in the West were initially inclined to humor Putin, treating his attempts to rewrite history as a necessary part of Russia’s healing process following the humiliations of the Soviet collapse. However, Russia’s 2014 invasion of Ukraine and six subsequent years of escalating hybrid warfare against the Western world have cast Putin’s amateur history lectures in an altogether different light.

It is now increasingly clear that when he defends the conduct of the Soviet Union, Putin does so not merely in order to repair battered Russian pride, but to justify his own authoritarian instincts and aggressive actions. When he praises the wartime alliance against Hitler and post-war cooperation between the victors, his real goal is a return to the days when spheres of influence allowed big countries to dominate their weaker neighbors. With Putin now completing the transition from democratically elected president to czar for life, the outside world can no longer avoid confronting the imperial ambitions that underpin his efforts to revise twentieth century history.

Putin’s recent English-language article in The National Interest was a masterclass in his use of history as a geopolitical tool. This 10,000 word epic on the causes and consequences of WWII contained many of the Russian leader’s favorite narratives. He defended the Nazi-Soviet Pact while blaming Poland and, to a lesser extent, the entire Western world for the start of WWII. Soviet crimes against humanity such as the mass killings of Polish prisoners or the invasions carried out in 1939-40 with Nazi complicity were either passed over in silence or dismissed in the blithest of terms. The brutal annexation of the Baltic states, which was accompanied by a wave of executions and deportations, was described euphemistically as “the incorporation of Latvia, Lithuania and Estonia.” “Their accession to the USSR was implemented on a contractual basis, with the consent of the elected authorities,” Putin assured readers.

Equally ominous was his enthusiastic treatment of the 1945 Yalta conference, where the leaders of the US and UK shamefully acquiesced to the Soviet post-war occupation of Central and Eastern Europe. According to Putin, Yalta “laid the foundation of a world that for 75 years had no global war, despite the sharpest contradictions.” This convenient characterization reflects Putin’s preference for an international arena where a handful of powerful countries decide everything between themselves. It also contains a thinly veiled threat of violence. There can be little doubt of the implied consequences if other leading powers fail to recognize Russia’s status.

As the Putin era enters its third decade, there is every reason to assume that foreign policy revisionism will remain high on the Kremlin agenda. The recent referendum campaign amply demonstrated that Putin himself has little to offer domestic audiences in terms of economic or social progress. Indeed, the constitutional changes selected to camouflage his presidential power grab were overwhelmingly conservative in nature, ranging from patriotic populism to promises of more social payments.

Such measures are unlikely to reverse the downward trend that has been evident for some time in Putin’s approval rating. This decline began in 2018 following a rise in pension age. Russia’s poor handling of the coronavirus crisis has further dented Putin’s standing as the country’s all-powerful and indispensable leader. With the energy-dependent Russian economy currently entering into what many expect will be a deep and protracted recession, the Kremlin will have fewer opportunities to buy back the loyalty of the population. These unfavorable domestic circumstances help to explain why Putin was in such a hurry to hold his recent referendum. They also make new foreign policy diversions increasingly attractive.

There is no sign that Putin’s appetite for expansionist revisionism has been tempered by the deterioration in international relations that began with the Russian seizure of Crimea in 2014. Instead, he remains unapologetic about the invasion of Ukraine and recently reiterated his belief in the injustice of the post-Soviet settlement. In a major TV interview that aired on June 21, a finger-wagging Putin claimed that numerous unspecified Soviet republics had left the USSR in 1991 together with “a huge amount of traditional historically Russian land”. Given the irredentist nature of the arguments used to justify Russian aggression against Ukraine, it is no surprise that these latest comments sent a chill rippling across the former Soviet empire.

Putin’s complaints over the loss of traditionally Russian lands are a reminder that his aggressive foreign policy remains primarily directed against the ex-Soviet republics, but the Western world cannot afford to be complacent. It is essential to take a broader view and recognize the common revisionist motive driving seemingly unrelated Russian activities ranging from military intervention in Syria and assassinations in the EU to cyber attacks and disinformation campaigns throughout the West. It should no longer be possible for European politicians to view projects such as the Nord Steam 2 pipeline in purely economic terms, or for Western governments to treat the growing litany of hostile Russian actions as isolated incidents. Instead, the only reasonable response to a resurgent and internationally aggressive Russia is containment.

The most logical place to confront the Kremlin is in Ukraine, which remains the main focus of Russia’s revisionist energies. The war between Russia and Ukraine is currently in its seventh year with no end in sight. The military front lines in eastern Ukraine have remained largely unchanged since the height of the fighting in 2014-15, but sporadic clashes continue. Meanwhile, the economic, informational, political and subterranean aspects of the conflict continue unabated.

With local elections scheduled to take place across Ukraine in October 2020, the Kremlin is expected to crank up efforts to destabilize the country in the coming months. We are already witnessing a widespread anti-American and anti-European information campaign spearheaded by Ukrainian media outlets controlled by Russian proxies. Other worrying signs include attacks on the independence of Ukraine’s National Bank and efforts to undermine the country’s post-2014 reforms.

Ukraine has the resilience to resist these efforts, but the country also needs Western support. While clear majorities of Ukrainians back EU and NATO integration, there is a danger that Russia’s considerable economic and military advantages, not to mention its large network of allies and collaborators within Ukraine’s power structures, will enable Moscow to overwhelm the country unless the international community intervenes to even up the odds.

The stakes in today’s Ukraine could hardly be higher. If the country is forced to accept a return to the Russian orbit, the repercussions will be felt far beyond the borders of the former USSR. It is therefore vital to recognize that the preservation of Ukrainian sovereignty is imperative not only for Ukraine itself, but for the entire Western world. In both word and deed, Putin has made it clear that he rejects today’s rules-based international order and seeks to reverse the verdict of 1991. His rival vision for a new age of empires represents an existential challenge to the West, and he now has sixteen more years to pursue his goal. If Putin is not stopped in Ukraine, the price of containing him will only increase.

Nataliia Popovych is the founder of the One Philosophy Group of Companies and co-founder of the Ukraine Crisis Media Center. Danylo Lubkivsky is the former Deputy Foreign Minister of Ukraine.