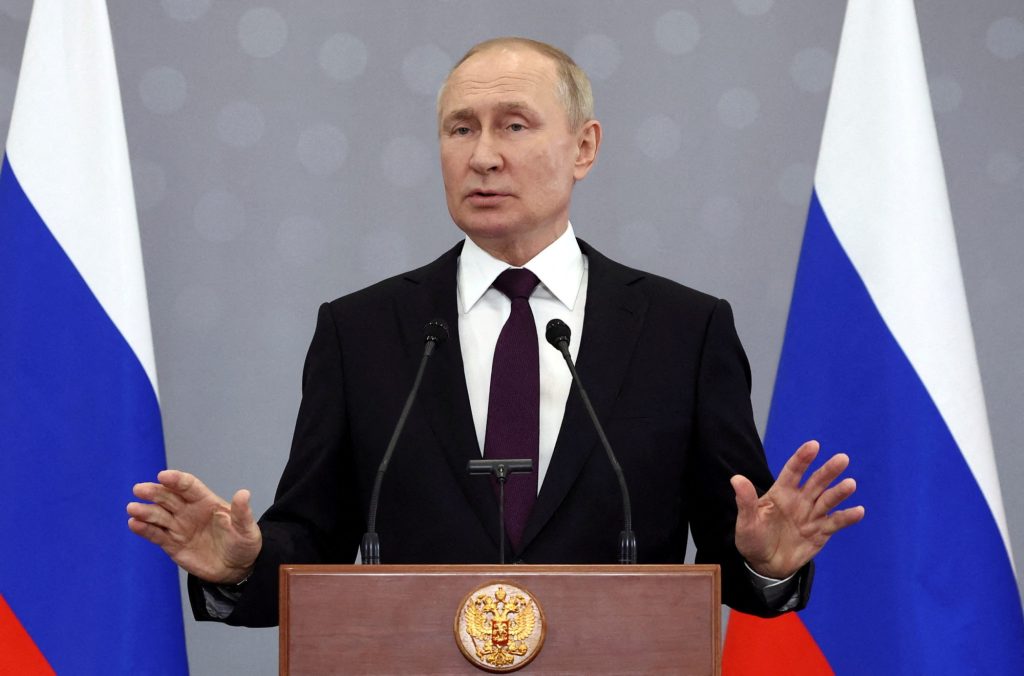 With his armies in retreat and his invasion of Ukraine rapidly unraveling, Russian President Vladimir Putin has recently resorted to nuclear saber-rattling. This has caused widespread international alarm and is fueling mounting calls for Ukraine to reach a compromise with the Kremlin in order to avert World War III.

The current rush to appease Moscow is deeply unnerving and reflects a shortsighted failure to appreciate the appalling security implications of bowing down to Russian intimidation. Giving in to Putin’s nuclear blackmail would not end the war in Ukraine. What it would do is set a disastrous precedent that makes a future nuclear war far more likely while encouraging dozens of countries to acquire nuclear arsenals of their own.

Putin first raised the prospect of a nuclear escalation in a September 21 address that saw him announce plans to annex large swathes of occupied Ukrainian territory and launch Russia’s first mobilization since World War II. “I’m not bluffing,” the Russian ruler declared. The following week, he accused the United States of “creating a precedent” by dropping atomic bombs on Japan in 1945 and vowed to use “all means at our disposal,” to defend Ukrainian regions annexed by Russia.

The Western response has been mixed. US officials have informed the Kremlin that Russia would face “catastrophic consequences” if it moves to use nuclear weapons in Ukraine, while EU foreign policy chief Josep Borrell has warned Moscow that any nuclear attack would be met with “such a powerful answer that the Russian army will be annihilated.”

Others have been less forthright, with French President Emmanuel Macron in particular coming under fire for unilaterally ruling out the use of nuclear weapons in response to a Russian nuclear attack on Ukraine. Meanwhile, tech billionaire Elon Musk has been one of numerous high-profile figures to promote Kremlin-friendly peace plans while arguing that the world faces possible nuclear apocalypse unless Ukraine cedes land (and millions of citizens) to Russia.

What comes next will determine the future role of nuclear weapons in international relations and shape the security climate for decades to come. If Russia’s nuclear threats succeed and Ukraine is forced to accept partial partition, the entire doctrine of mutually assured destruction (MAD), which served so well throughout the Cold War, will be torn up and a new age of instability will begin.

MAD worked because the two Cold War era superpowers balanced each other out. The Russian invasion of Ukraine is completely different. We are currently witnessing a nuclear superpower threatening a non-nuclear state precisely because it has failed to win a war by conventional military means. The message from Moscow is both menacing and unmistakable: countries with nuclear weapons cannot be defeated by those who have none. This is a recipe for nuclear proliferation.

If Putin is able to rescue his failing invasion and achieve his military goals through the use of nuclear blackmail, it will spark a nuclear arms race of unprecedented proportions. A long list of countries including everyone from Iran and Saudi Arabia to Nigeria and South Korea will take note of the new rules established in Ukraine and scramble to join the nuclear club. Eventually, not having nukes could come to be seen as an invitation for invasion.

This would be bitterly ironic as Ukraine was once something of a poster child for nuclear non-proliferation. In 1994, Ukraine agreed to hand over what was at the time the world’s third-largest nuclear arsenal in exchange for “security assurances” from Russia, the United States, and the United Kingdom. The Budapest Memorandum is now widely recognized as one of the most notorious diplomatic blunders of the modern era. It is a mistake few are eager to repeat. Indeed, given Ukraine’s current predicament, why would any country abandon their own nuclear aspirations in return for empty assurances?

The only way to prevent the world from descending into a dark future of spiraling nuclear confrontation is to make sure Putin fails. His nuclear threats require an overwhelming response spelling out that any atomic aggression in Ukraine would mean defeat and ruin for Russia. There is no longer room for strategic ambiguity or talk of proportional retaliation; Putin must be made to personally understand that neither he nor his regime would survive if he chooses to cross the nuclear red line.

Many NATO member states will no doubt be deeply uncomfortable with the idea of directly confronting the Kremlin in this manner. Others will warn that such posturing could easily ignite a third world war. These are valid concerns, but there are no longer any risk-free options available. Unless the international community stands up to Putin now, the entire world will be plunged into a dangerous new era defined by the constant threat of nuclear warfare.