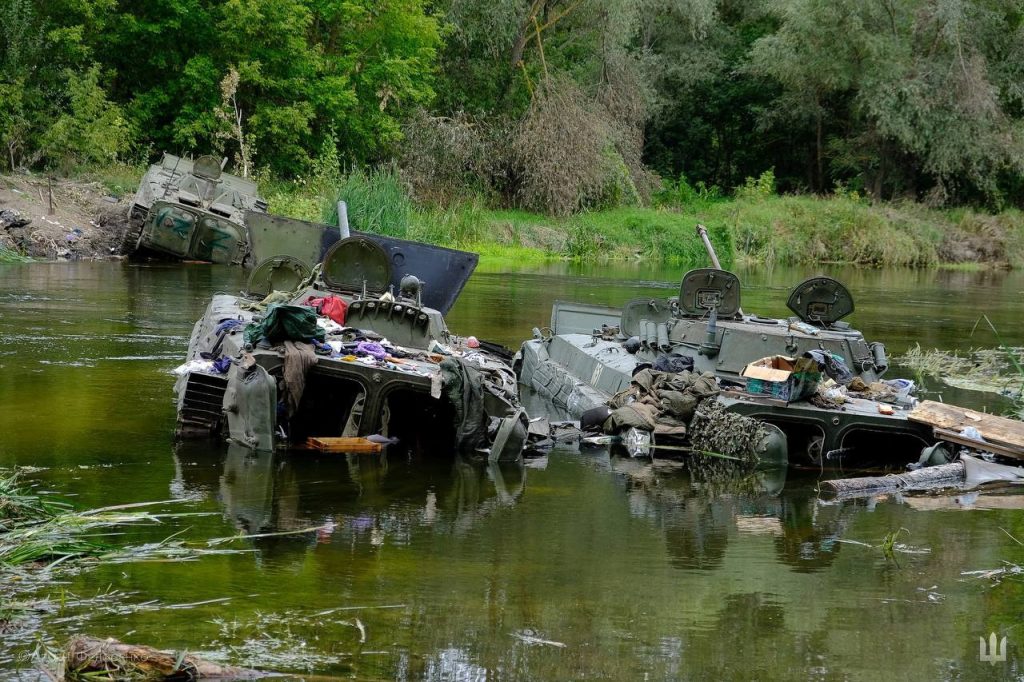 The stunning success of Ukraine’s recent counteroffensive has exposed the rotten reality behind Russia’s reputation as a military superpower. More than six months since the onset of Vladimir Putin’s Ukraine invasion, it is now obvious that his army is in fact a deeply flawed institution that bears almost no resemblance to the immaculate fighting force of Red Square parades and Kremlin propaganda. Instead, the Russian military suffers from endemic corruption, low morale, and poor leadership, with individual initiative in short supply and commanders deeply reluctant to accept personal responsibility. Last week’s disastrous defeat in northeastern Ukraine will only worsen the situation, with officers gripped by fear as Moscow seeks scapegoats for what is shaping up to be one of the most shameful military defeats in Russian history.

The scale of Ukraine’s recent victory has stunned the entire world, but perhaps nobody was as surprised as the Russians themselves. Naturally, the Kremlin sought to suppress news of the counteroffensive, but the speed of events and the sheer scale of the collapse meant that details of the unfolding disaster could not be completely censored despite the best efforts of the authorities. The resulting realization was a huge psychological blow for the Russian public, who learned for the first time that their soldiers in Ukraine were demoralized and beaten. The rout of Russian forces in Kharkiv Oblast was also a painful wake-up call for Ukrainian collaborators, who realized that Russia cannot be relied upon and will abandon them without thinking twice.

Beyond these immediate implications, Ukraine’s counteroffensive also says much about the broader state of the Russian military and provides valuable indications of what we can expect to see next. From now on, fear will shape every single decision made by Russian commanders in Ukraine. This will not be fear of losing precious lives or damaging Russia’s national interests; it will be a very personal fear of retribution from a vindictive hierarchy seeking culprits to blame for the rapidly declining fortunes of the Russian army.

This reaction speaks volumes about the dysfunctional leadership culture within the Russian military, where fear of failure has been the dominant instinct since Soviet times and can arguably be traced all the way back to the czarist era. With the hunt now underway for guilty parties, nobody will want to take responsibility for decisions that could lead to further defeats. Instead, officers at every level will seek to act as loyal cogs in the system while forcing those higher up the chain of command to issue orders.

The inefficiency and lack of accountability at the heart of the Russian military help to explain its poor performance in Ukraine. While the Ukrainian military has undergone a radical transformation away from Soviet traditions in recent years and has embraced NATO-style reforms that hand the initiative to individual units and commanders in the field, the Russian army remains a rigid fighting machine hamstrung by top-down decision-making and totally unsuited to the rigors of modern warfare. Today’s Russian commanders continue to seek inspiration primarily from the military achievements of the Red Army during World War II. It is therefore no surprise that they find themselves being consistently outmaneuvered by a far more mobile and quick-witted enemy.

Recent events in Ukraine have revealed the underwhelming truth behind the many exaggerations that had previously led international experts to rank Russia as the world’s number two military. In a peacetime environment, such misconceptions were perhaps understandable. According to official figures, Russia had the world’s third-largest annual defense budget, at more than sixty billion dollars. Moscow was expert at staging impressive training exercises, while the Kremlin also invested heavily in prestige events that reinforced the impression of a mighty military.

It is now clear that Western observers made the mistake of confusing quantity for quality. While most analysis focused on the number of troops, tanks, missiles, and planes, these figures were misleading and offered no real indication of combat readiness. Nor was Russian data entirely accurate. Thousands of Russian tanks turned out to be partially stripped and incapacitated, while hundreds of missiles have fallen short of their targets since the start of the Ukraine invasion. Corrupt practices appear to have artificially inflated the size of the Russian military while drastically undermining its fighting potential.

The Russian military’s difficulties in Ukraine have also served to highlight the limitations of Vladimir Putin’s authoritarian rule. The invasion force assembled in early 2022 was woefully inadequate for the task at hand, but Putin’s personal obsession with the destruction of Ukraine meant that nobody dared to warn him of the dangers. Instead, Putin’s blind faith in the invincibility of the Russian army and his unhinged insistence on Ukraine’s illegitimacy were allowed to prevail over more sober military judgments. After all, how can a superpower lose to a country that does not exist? Like so many dictators before him, Putin fell victim to his own propaganda. His commanders were simply too scared to contradict him.

As Putin’s fantasy vision collided with reality, Russia plunged further and further into denial. The Russian withdrawal from northern Ukraine in April 2022 following defeat in the Battle for Kyiv and the subsequent retreat from Snake Island were both laughably portrayed as “goodwill gestures.” Likewise, when Ukraine sank the Russian Black Sea Fleet flagship, the Moskva, this was attributed to an accidental onboard fire. Unsurprisingly, Russian propagandists have attempted to spin the recent retreat from Kharkiv as a “planned regrouping.” These absurd excuses convince nobody and merely serve to underline Russia’s inability to admit defeat.

As the true state of the Russian military becomes impossible to deny, international faith in a Ukrainian victory is growing visibly. The Kharkiv offensive has proved beyond doubt that Ukraine is capable of staging large-scale offensive operations and reclaiming land that Russia has held for extended periods. While the war is far from over, most observers now recognize that the initiative has passed to Ukraine.

In the coming months, much will depend on the continued flow of weapons to Ukraine. The country’s leaders are requesting tanks and fighter jets as well as more artillery, ammunition, and armored transports in order to force Russia out of Ukraine entirely. This support cannot be taken for granted, but at present it looks likely that arms deliveries will continue to expand, both in terms of the types and quantities of weapons being delivered. With the myth of Russia’s military superpower status now shattered, the way is open for the democratic world to arm Ukraine for a decisive victory that will secure peace in Europe and bring Putin’s imperial ambitions to an end.

Ukraine’s recent Kharkiv counteroffensive was a major breakthrough but the country’s Western partners must now deliver more weapons in order to achieve a decisive victory and end Russia’s genocidal occupation.

Image: Armored vehicles abandoned by Russian soldiers are seen during Ukraine's Kharkiv region counteroffensive. September 11, 2022. (Press service of the Commander-in-Chief of the Armed Forces of Ukraine/Handout via REUTERS)