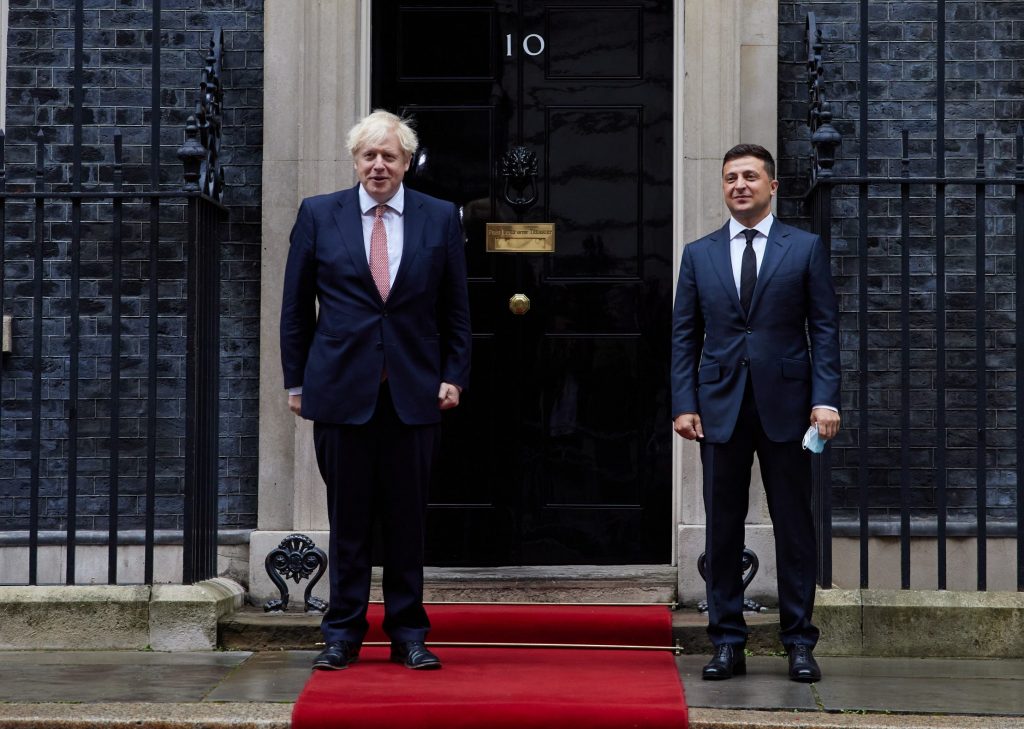 Ukrainian President Volodymyr Zelenskyy’s state visit to the UK in early October was probably the most consequential foreign relations act of his presidency to date. It resulted in a range of important agreements on trade, security and other areas, taking UK-Ukraine cooperation to a new and much higher level. “This is a new page for Ukrainian–British cooperation and an unprecedented event for Ukraine,” noted the Ukrainian leader.

The visit began with an audience at Buckingham Palace, where President Zelenskyy and First Lady Olena Zelenska were met by Prince William, Duke of Cambridge, and his wife Kate Middleton, the Duchess of Cambridge.

President Zelenskyy next traveled to the Royal Naval Base in Portsmouth on England’s southern coast, where he was shown the aircraft carrier Prince of Wales and a display of the latest UK armaments. This was followed by discussions on British offers of assistance to develop the Ukrainian Navy and the Ukrainian ship building industry, which is particularly necessary after Ukrainian naval ships and installations in Crimea were lost during the 2014 Russian invasion.

Ukrainian Minister of Defense Andriy Taran and UK Defense Secretary Ben Wallace signed a Memorandum on military and defense construction cooperation, to be largely funded by GBP 1.25 billion on favorable terms from UK Export Finance (UKEF), the UK’s export credit agency. This agreement will result in the production of missile cruisers and other ships in line with NATO standards to help rebuild the Ukrainian Navy. The first two ships will be built in the UK in cooperation with Ukraine, leading to the construction of improved shipyards in Ukraine in order to continue the production of many more ships armed with the latest high-precision weapons and electronic defenses.

Within the framework of the official visit, Ukraine’s Interior Minister Arsen Avakov met with UK Home Secretary Priti Patel on October 7 to coordinate bilateral cooperation in the fight against money laundering, cyber crime, and illegal migration. Avakov and Foreign Minister Kuleba also met with the UK Prime Minister’s International Affairs Adviser David Quarrey to discuss how to defend against Russian hybrid warfare, as well as how best to rehabilitate veterans who have been psychologically affected by their service during the ongoing conflict in eastern Ukraine.

The main event of the visit was the October 8 signing of a comprehensive Political, Free Trade, and Strategic Partnership Agreement. This wide-ranging agreement covers security, trade in goods and services (with certain tariff reductions), and investment. It aims to provide a basis for bilateral trade and investment after the Brexit transition period ends on 31 December 2020, at which point the EU’s existing trade agreement with Ukraine will no longer apply to the UK.

This Partnership Agreement takes UK-Ukraine cooperation to a much higher level and is backed by a huge GBP 2.5 billion in new export credits by the UKEF, including the GBP 1.25 billion cited above for Ukrainian naval projects. The terms for these export credits are very advantageous for Ukraine, including loans for up to 10 years with three-year grace periods and interest at 2.5 percent in euros and 3.5 percent in British pounds sterling. Additionally, the requirement for only 20 percent UK content is much less restrictive than the export credits offered by most other countries.

At the official signing, UK Prime Minister Boris Johnson sought to put the Partnership Agreement in a broader context. “The UK is Ukraine’s most fervent supporter. Whether it’s our defense support, stabilization efforts, humanitarian assistance, or close cooperation on political issues, our message is clear: we are utterly committed to upholding the sovereignty and territorial integrity of Ukraine. The Partnership Agreement we signed today … will bring increased security and prosperity for both the people of the UK and Ukraine,” he commented.

Following the signing of the Partnership Agreement, President Zelenskyy visited the UK Parliament in Westminster to meet with Sir Lindsay Hoyle, the Speaker of the House of Commons, and other prominent MPs. He then traveled to Mansion House for a meeting with the Lord Mayor of the City of London, William Russell, before visiting the London Stock Exchange, where he spoke with major investors in Ukrainian bonds.

The Ukrainian President offered reassurances to investors regarding the independence of the National Bank of Ukraine following the recent change of governor. He also noted that the Ukrainian economy is among the least affected by Covid-19, in part because the crisis has not significantly harmed two of its major economic sectors, Ukrainian agriculture and IT. Ukraine is expected to largely recover next year from the 5.8 percent decline in GDP predicted for 2020 due to the pandemic.

This landmark visit signals a new chapter in ties between Ukraine and the UK. It comes exactly two years after the British Ukrainian Chamber of Commerce (BUCC) hosted Ukrainian Week in London, a watershed moment in bilateral relations that attracted over 1,000 high level participants to discuss trade, investment and security, underlining the enormous opportunities for greater cooperation.

The new Partnership Agreement is just the beginning.

The UK and Ukraine are natural business partners. The UK is Europe’s most important net food importer, while Ukraine is the world’s largest grain exporter and an emerging agricultural superpower, as well as a growing consumer of UK goods and services. While the trading terms under the Partnership Agreement are not initially as open for free trade as some would like, they represent a good start.

As trade and investment develop, the Partnership Agreement’s tariff-free quotas on UK grain and poultry imports in particular will be quickly filled. Consequently, the current agricultural trading terms should be periodically reviewed and improved without waiting for several years to lapse, as is currently indicated in the Partnership Agreement. This will allow Britain to take advantage of Ukraine’s role as Europe’s principal high quality, low cost food supplier. UK consumers will benefit, as will the UK’s meat and dairy farmers, who constitute two-thirds of British farming and need reasonably priced, high quality feed imports.

Bate C Toms is the Chairman of the British Ukrainian Chamber of Commerce and a Partner at B.C.Toms & Co.

Image: UK Prime Minister Boris Johnson and Ukrainian President Volodymyr Zelenskyy pictured outside 10 Downing Street in London on October 8 prior to the signing of a landmark Political, Free Trade and Strategic Partnership Agreement between the two countries. (Photo: president.gov.ua)