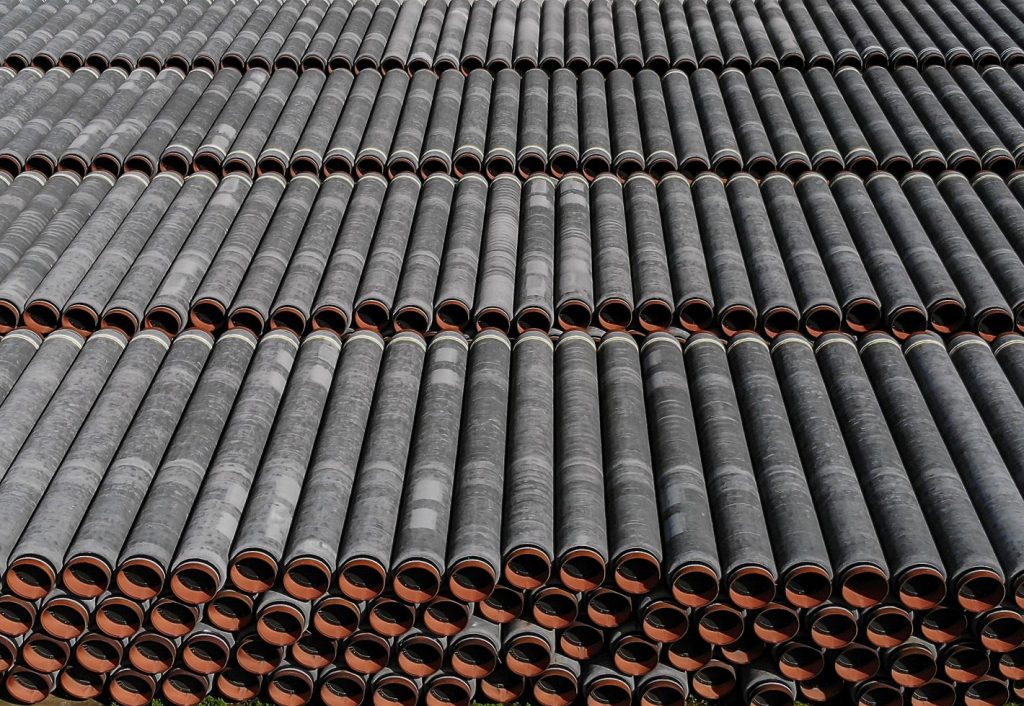 The Kremlin is on a roll. So far this year, it has used dubious means to entrench its rule, likely poisoned one of its main critics, and now works to suppress protests in Belarus—all while gaslighting the transatlantic intelligentsia regarding the aims of its fledgling economic weapon: the Nord Stream 2 natural gas pipeline.

Russia’s state-owned Gazprom owns 100% of the project. The company has dumped billions of dollars to build these unnecessary pipelines, placing lavish orders with European suppliers. Will Gazprom ever get the money back? The Kremlin couldn’t care less. The project’s role is not commercial but geopolitical: to menace the world. That’s why the Kremlin spends so incessantly on redundant pipelines and fights so fiercely to get them going.

The nearly finished pipeline originates in Russia and runs underwater through the Baltic Sea, with Germany as its planned destination. The Kremlin falsely argues that the pipeline will simply diversify Europe’s natural gas supply routes and deliver new energy to democratic Europe. Nothing more to see here, Moscow claims. It’s just the free market at work.

That argument, of course, is pure propaganda. The Kremlin believes not in the market, but in the exertion of geopolitical power. This informs the true purpose of the pipeline, which is to boost Russian influence in Europe and cripple Ukraine. Currently, Russia relies on Ukraine to sell billions of dollars in natural gas to customers in Europe. The Kremlin despises this dependence because it prevents Moscow from further aggression against our country.

Ukraine’s role in transiting Russian gas to Europe is a deterrent against escalated Russian military adventurism. This is the Kremlin’s central rationale behind Nord Stream 2. The completion of the pipeline would eliminate Ukraine’s key leverage over Russia, leaving our country wholly vulnerable to Russian subjugation. For Ukraine, it’s an almost existential matter of national defense and security.

All is not lost, but it soon could be.

With the Kremlin looking for creative ways to finish the final 160 kilometers of the pipeline, US Congress has included new sanctions in an annual defense bill that will make completing the project impossible. Without such steadfast bipartisan support from Washington, Moscow could very easily have finished the pipeline by now and struck another blow against Ukraine and transatlantic security. What’s more, this Congress push for more sanctions shows America’s sustained and heightened concern for Russia’s unwelcome push into Europe.

It’s worth remembering that these essential sanctions were preceded by years of diplomacy from the Obama and Trump administrations, as well as countless bipartisan warnings from Congress. But those diplomatic efforts were exhausted and unfortunately weren’t enough to halt the project.

While policymakers in Washington have been focused on safeguarding the collective interests of the transatlantic community, a small number of actors in just a handful of European countries have aligned with the Kremlin to build Nord Stream 2. They have failed to consult with their European friends and allies, who are overwhelmingly united against the project. Such earnest consultation would have stopped the pipeline long before construction ever began, removing the need for any US sanctions.

Instead, outright falsehoods are now used to support the completion of Nord Stream 2 and oppose US sanctions. The most obvious falsehood is that Russia is acting in good faith. Proponents of the pipeline say that Russia is working with Germany to ease Ukraine’s inevitable economic pain from this project by committing to ship gas through Ukraine for the next five years. Believing that the Kremlin will honor that commitment requires some imagination and ignores recent history.

In 2019, Moscow did agree to sign a new gas transit contract with Ukraine, but did so only because bipartisan US sanctions against Nord Steam 2 stopped the pipeline in its tracks. Prior to these sanctions, Russia offered Ukraine only a six-month extension of its existing contract, because Moscow assumed the pipeline would be finished within that time frame.

Make no mistake: If Nord Stream 2 is finished, Russia will immediately withdraw from its gas contract with Ukraine. This will leave Ukraine, along with the countries of Central and Eastern Europe, at the mercy of the Kremlin and Russian blackmail.

Nord Stream 2 proponents expect us to believe that the pipeline is simply another method of energy delivery to Europe. But Nord Stream 2 does not bring any new gas to Europe, it simply redirects existing Russian gas flows away from Ukraine and concentrates them in the Baltic Sea. There is no increased diversification of natural gas or delivery routes, which is the essence of energy security.

Unfortunately for Moscow, its final push to complete the pipeline coincides with a global reckoning that free countries need more supply chain diversification. If Putin’s plan comes to fruition, Nord Stream 2, together with Nord Stream 1, would be the one and only point of arrival for more than 30 percent of Europe’s natural gas, which would undermine Europe’s energy security. This could prove to be a weapon more menacing and more readily employable than Russia’s nuclear stockpile.

During the early days of the coronavirus pandemic, face masks were a nearly impossible commodity to obtain. The fact that a sudden spike in demand temporarily took such a simple yet vital product off the market should force every policymaker to rethink whether it would be a good idea to hand one of the most anti-Western governments in the world the power to decide which Europeans can heat their homes.

A weaker Europe and a stronger Russia benefits no one but the Kremlin, a proven enemy of liberty and democracy. Europeans, Americans, and all who value freedom over coercion should be clear-eyed about Moscow’s intentions. The US must stop Russia’s plans before it is too late.

Nord Stream 2 is a Russian strategic weapon, and it has almost reached its goal. The pipeline has crossed the Baltic Sea, but thanks to US sanctions, construction has paused just a blink of an eye away from reaching Germany. It is time for the democratic world to stop this menace for good.

Mykyta Poturaiev, Rada Member, Servant of the People, Head of the Committee for Humanitarian and Informational Policy, Head of Rada Delegation to the OSCE Parliamentary Assembly

Yehor Cherniev, Rada Member, Servant of the People, Chair of the Ukrainian Delegation to the NATO Parliamentary Assembly, Deputy Head of the Digital Transformation Committee

Yelyzaveta Yasko, Rada Member, Servant of the People, Head of the Ukrainian Delegation to PACE, Head of the Subcommittee on Bilateral, Multilateral and Interparliamentary Cooperation

Vadym Halaichuk, Rada Member, Servant of the People, First Deputy Head of the Committee on issues of European integration

Galyna Mykhailiuk, Rada Member, Servant of the People, Deputy Head of the Committee on Law Enforcement

Dmytro Kysylevskyy, Rada Member, Servant of the People, Deputy Head of the Committee on Economic Development

Yevheniia Kravchuk, Rada Member, Servant of the People, Deputy Head of the Committee on Humanitarian and Information Policy

Maryna Bardina, Rada Member, Servant of the People, Deputy Head of the Committee on Foreign Policy and Inter-Parliamentary Cooperation

Mykhailo Ananchenko, Rada Member, Servant of the People, Head of the Subcommittee of the Committee on Foreign Policy and Inter-Parliamentary Cooperation

Anastasia Radina, Rada Member, Servant of the People, Head of the Committee on Anti-Corruption Policy

Marikovsky Oleksandr, Rada Member, Servant of the People, Deputy Head of the Committee on Environmental Policy and Nature Management

Image: Pipes for the Nord Stream 2 pipeline stored at the port of Mukran in Sassnitz, Germany. September 10, 2020. (REUTERS/Hannibal Hanschke)