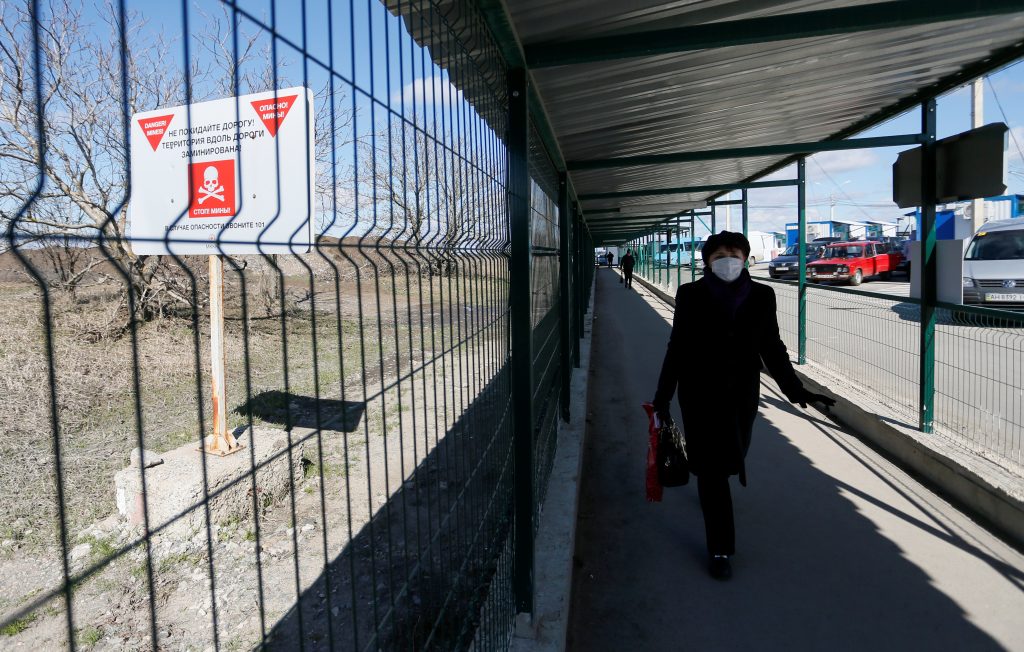 April 2020 marked the six-year anniversary of Russia’s ongoing military incursion into eastern Ukraine. The conflict has resulted in the deaths of over 14,000 and the displacement of nearly two million people. With the war still far from over, Russian-occupied eastern Ukraine now has the potential to become a hotspot in the global fight against the coronavirus pandemic.

The humanitarian situation in and around occupied eastern Ukraine has been deteriorating ever since 2014, with over three million residents thought to be in need of aid. Moscow’s local proxies have consistently complicated the efforts of international aid agencies operating in the region by imposing a range of restrictions.

Things have deteriorated further since the start of the coronavirus pandemic in recent weeks. Following the first confirmed coronavirus cases in Ukraine, the Ukrainian government announced it would restrict movement in areas near the contact line. The situation worsened significantly when the so-called Donetsk People’s Republic and the Luhansk People’s Republic closed their borders.

While Ukraine has imposed a range of precautionary measures to combat the spread of coronavirus, the Kremlin-appointed authorities in the separatist republics have failed to take appropriate action and continue to deny any cases of the pandemic in the occupied regions. To make matters worse, they have barred various humanitarian organizations from entering occupied eastern Ukraine. The Organization for Security and Co-operation in Europe (OSCE) and other international organizations have denounced this decision and warned that it could lead to a public health emergency.

Due to the restrictions in place, there is no way of accurately assessing the true scale of the coronavirus situation in occupied eastern Ukraine. Nevertheless, the available information gives sufficient cause for concern. While Ukraine’s healthcare system is both underfunded and outdated, six years of war have left the healthcare infrastructure in occupied eastern Ukraine even less prepared to deal with a major medical emergency such as the coronavirus crisis. Hospitals themselves lack the equipment and facilities to treat potentially large numbers of patients, while many doctors and medical professionals have left the war-torn region.

The separatist authorities have also failed to impose major restrictions on public life in order to reduce the spread of the virus. Whereas the rest of Ukraine has been in an effective lockdown since the middle of March, many restaurants, shopping centers, and forms of public transport continue to operate as normal in the occupied east. Meanwhile, local media has downplayed the coronavirus threat, with a number of recent deaths attributed to other causes such as pneumonia.

This somewhat cavalier approach to the pandemic is particularly dangerous given the strikingly high percentage of pension-age residents living in occupied eastern Ukraine. Since the onset of Russian aggression in spring 2014, the region has experienced a mass exodus. The vast majority of those who chose to leave were of working age or younger, with the bulk of the remaining population falling into the pensioner category.

Although exact statistics are unavailable, anecdotal evidence suggests this population includes large numbers of people with preexisting health conditions who are unable to change location comfortably. In other words, Russian-occupied eastern Ukraine has all the prerequisites for a catastrophic coronavirus outbreak, including limited anti-pandemic measures, crumbling healthcare infrastructure, and a vast pensioner population with the kind of medical conditions that place them in the highest risk categories.

Any outbreak in eastern Ukraine will not remain isolated in the occupied zone. Beyond those living in the areas under Russian control, the group most at risk is the Ukrainian military. Tens of thousands of Ukrainian troops currently serve along a frontline in eastern Ukraine stretching hundreds of kilometers. According to recent reports, there is a scarcity of masks and gloves for soldiers on the front. The Ukrainian military also lacks coronavirus tests and other vital kit to monitor and protect against the pandemic. Poor living conditions on the front leave these soldiers especially vulnerable. They occupy cramped quarters and spend days at a time in trenches, with close physical contact and a lack of washing facilities creating a potentially ideal environment for the spread of the virus.

With the OSCE and other international organizations facing heightened restrictions on access to occupied eastern Ukraine, there are limits to what the international community can do to reduce the risk of a deadly outbreak in the region. One avenue is to increase calls on Moscow to intervene and either impose stricter anti-pandemic measures itself or accept medical aid from outside. Ukraine can also use existing channels of communication such as the Trilateral Contact Group in Minsk to raise the subject of greater cooperation with both Kyiv and international organizations in order to combat the pandemic.

Such cooperation is likely to prove vital if Russian-occupied eastern Ukraine is to avoid becoming a regional hotspot in the global coronavirus outbreak. Ever since 2014, the Kremlin has shut the region off from the outside world, with the international media and aid agencies increasingly denied access. This has created a perfect storm of conditions for the spread of the virus, and now threatens to pave the way for a healthcare emergency that Ukraine alone is ill equipped to deal with.

The international community must now press Moscow to provide an accurate picture of the situation in Russian-occupied eastern Ukraine and grant access to international humanitarian organizations. The grim alternative is an unchecked coronavirus outbreak that could cost thousands of lives among a population that has already suffered immensely due to Russia’s imperial ambitions.

Mark Temnycky is an AIPS accredited journalist who covers European politics and sports. He has been published by Forbes, EurActiv, and EUobserver.

Ukraine experienced a month of political turbulence in March 2020 as the country grappled with cabinet reshuffles amid an escalating coronavirus crisis. Who emerged as the political winners and losers?

Ukraine is ill-prepared for a major coronavirus outbreak but the country has wasted precious weeks engaging in political drama as the scale of the pandemic threat become increasingly apparent.