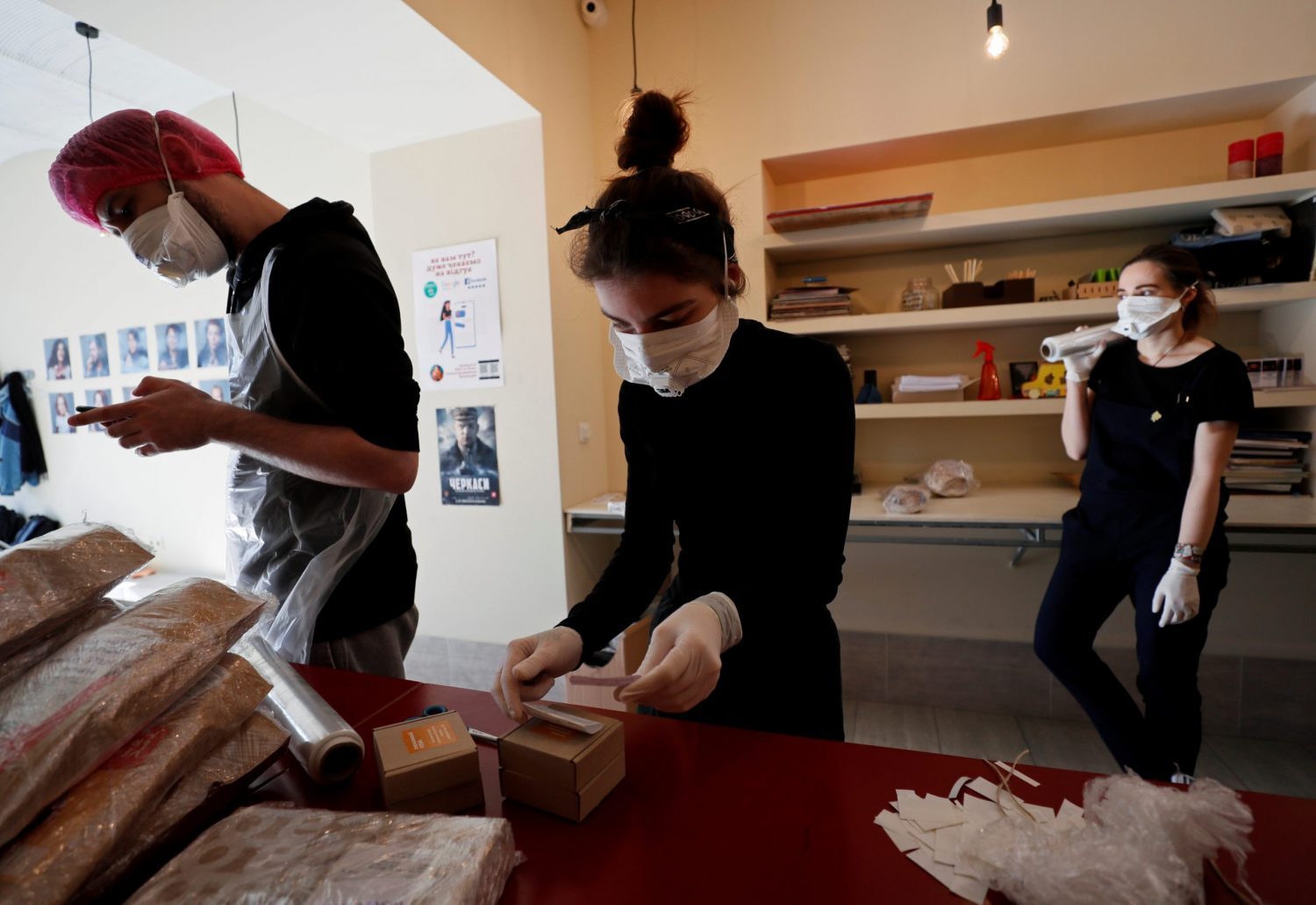 With the coronavirus crisis escalating fast, Ukraine needs to implement drastic policies that will have an immediate effect on strengthening its already withered economy. Financial experts are starting to provide rough estimates of how much economic damage the pandemic is likely to cause in Ukraine. At present, the outlook ranges from “bad” to “disastrous”.

Tomas Fiala, head of Ukraine’s leading investment management company Dragon Capital, expects Ukraine’s GDP to drop by 4 percent if the coronavirus quarantine lasts up to three months, and as much as 9 percent if the lockdown goes on even longer. Yuliya Kovaliv, deputy head of Ukraine’s presidential office, estimates that the state budget deficit could expand from 2.1 percent to 7 percent of GDP in 2020.

These figures represent billions of dollars in losses for an emerging economy that has only relatively recently returned to growth following the major crash of 2014 when Russia started its war against Ukraine.

Ukraine’s small and export-reliant economy is particularly vulnerable to coronavirus complications, which is why Ukrainian officials simply cannot afford to delay anti-crisis measures. It is a given that Ukraine must cooperate with the International Monetary Fund to avoid an economic collapse. It is also a must for Ukraine to revamp its fight against corruption and reform its judicial system.

In addition to these crucial policies, further steps are also required in order to put Ukraine on a sounder economic footing. Below are five strategies that Ukrainian officials should implement over the coming months in order to enhance the competitiveness of the country’s economy as it prepares to set out on the long road towards recovery in the post-coronavirus world.

Focus on SME growth: Big names make the news but it is the small and medium-sized enterprises (SMEs) of the world that build strong and healthy economies. Having 100,000 small-scale investors with businesses worth USD 10,000 each is much better than one big investor worth USD 1 billion. Why? Those 100,000 investors bring 100,000 ideas and 100,000 voices. They generate a swarm of creativity and healthy competition that will fuel innovation throughout the Ukrainian economy.

A strong SME sector also means that wealth is widely dispersed instead of remaining in the hands of just a few individuals. Large numbers of SME investors are much more difficult for officials to control or collude with than one single billionaire investor. Ukraine’s booming IT sector is a great example of this principle. The Ukrainian government doesn’t know how to control this multi-billion dollar industry as there are so many players that collectively have a strong voice. The result is a thriving and internationally competitive sector that is creating an entirely new class of relatively wealthy Ukrainian IT professionals.

The IT experience can be repeated in other sectors. If there are ample SMEs achieving success in any segment of the Ukrainian economy, bigger fish will naturally be attracted, while the purchasing power of Ukrainians will also significantly increase. With this in mind, Ukraine must provide maximum protection to the country’s SMEs during the current crisis, and make SME support a top priority once the recovery gets underway.

Empower civil society: Successful businesses are only one aspect of a healthy nation and a competitive economy. It is important not to forget about the non-entrepreneurs that can have as much of an impact on the economy as businesses themselves. Having strong civil society institutions to serve as watchdogs for corruption and human rights violations can help the Ukrainian economy to grow in a sustainable manner and will inspire the confidence of both domestic and foreign investors.

These efforts will be substantially strengthened by the support of independent media outlets. In today’s Ukraine, it remains virtually impossible to run a media outlet without relying on money from an oligarch or other business interests. Fostering the growth of a truly independent media sector through favorable taxation policies and access to financing will ultimately bring positive economic results. It will help to keep the authorities accountable while providing the business community with an independent voice.

Teach practical skills: Ukrainians rank among the world’s most highly-educated populations, but the knowledge they acquire is not always particularly relevant to today’s business environment. Ukraine should have invested a long time ago into practical and innovative education. With schools currently forced to adopt distance learning and experiment with new methods of teaching due to the coronavirus quarantine period, now is the perfect opportunity to address this issue.

It should be mandatory for students to take at least one class of financial management or introductory applied economics in order to provide the emerging generation of young Ukrainians with the practical skills to become financially responsible once they reach adulthood. This approach could be expanded to include a range of contemporary professional skills such as digital literacy and basic IT programming. Over the past three decades of independence, Ukrainians have earned a well-deserved reputation as early adopters who embrace innovation. It is time for the country’s school curriculum to reflect this.

Enable dual citizenship: Even though tens of thousands of Ukrainians are believed to possess more than one passport, holding dual citizenship is technically illegal in Ukraine. Ukrainian President Volodymyr Zelenskyy has spoken favorably of dual citizenship but has yet to take any action on the issue. This needs to change.

Allowing dual citizenship could be a way of empowering Ukrainian citizens. It is much more difficult to influence a Ukrainian who is also backed up by Canadian, American or British law. If more Ukrainian civil servants and civil society leaders officially had dual citizenship, reform efforts would benefit and oligarchs would start losing their control over lawmakers.

The only current exception to dual citizenship reform would be for Russian citizenship. The same restrictions would also apply to any additional aggressor states in the future.

Make foreigners welcome: Despite the many invitations issued by Ukrainian officials for foreigners to invest in Ukraine, including from the president himself, it is still a headache for a foreigner to receive Ukrainian residency. Ukraine could and should quickly remove the red tape that makes this process so painful.

Ukraine should also make it easier for companies in Ukraine to hire foreign employees. There is currently little incentive for a company to hire a foreigner; employment taxes are too high and there is too much bureaucracy involving considerable additional expenses. This prevents Ukrainian companies from attracting the kind of international talent that can help them grow.

There has been some progress in this direction, but it remains insufficient. Ukraine’s recently established Ministry of Digital Transformation is currently setting up a migration system in order to ease the hiring process for up to 5,000 foreign IT specialists. The goal is to attract more IT professionals to Ukraine from neighboring countries. This is a step in the right direction but it should not be limited to the IT sector. Instead, the government needs to ease the hiring process in all areas of the economy. A country experiencing a massive outflow of economic migrants should not be imposing barriers and introducing quotas.

None of the above proposals would require endless planning and drafting prior to implementation. On the contrary, they could all be adopted fairly rapidly, laying the groundwork for effective results in the years ahead. The outcome would be a less oligarch-dependent Ukrainian economy with a much greater ability to handle future crises as they arise.

As today’s politicians look to steer the country through the coronavirus crisis, they also need the vision to see beyond the current turbulence. The ultimate aim must be to make the Ukrainian economy less vulnerable and more competitive in the new global marketplace that will emerge once the pandemic is over.

Ilya Timtchenko is a freelance writer and former business editor at the Kyiv Post.

Ukraine is facing major economic turmoil as a result of poor political decisions in the midst of an unfolding global crisis sparked by the coronavirus pandemic. The country now urgently needs to secure a new IMF agreement, argues Anders Åslund.