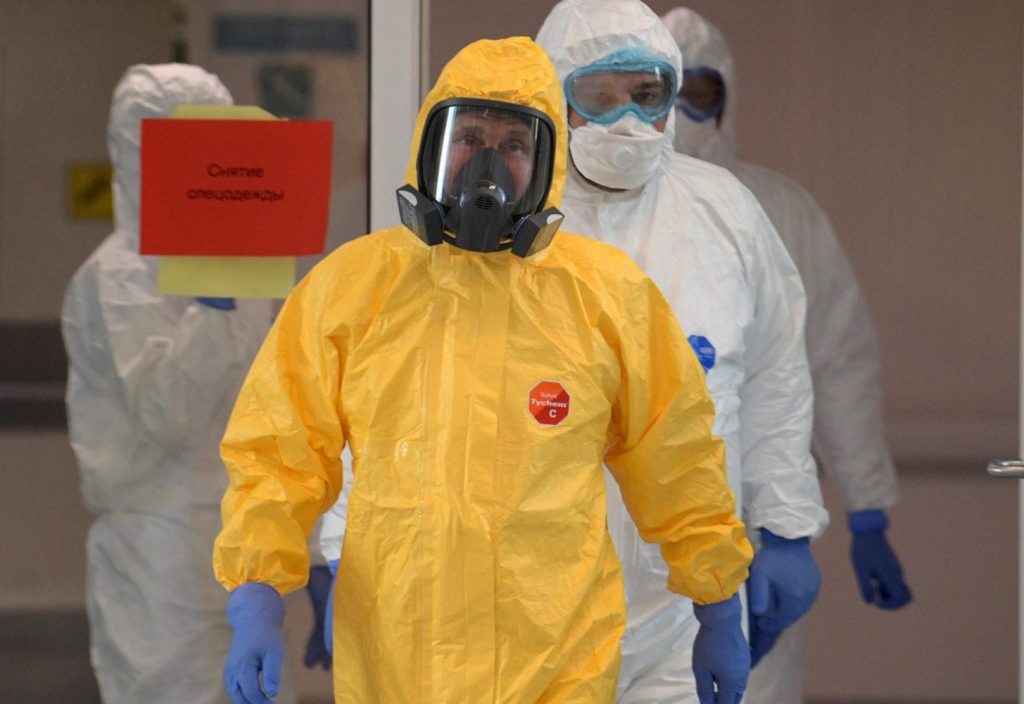 As the coronavirus crisis continues to escalate across the globe, questions are increasingly being asked over the credibility of official Russian infection statistics. Russia’s population of around 146 million is concentrated in big cities and has so far been subject to fairly relaxed self-isolation regulations. This, together with the country’s notoriously rickety healthcare system and 4,300 km shared border with China, make it particularly vulnerable to a major outbreak. Instead, by March 24, Russia had reported less than 500 confirmed coronavirus cases and a single death, a fraction of the infection and fatality rates registered elsewhere in Europe.

These figures cannot be attributed to low levels of testing. On the contrary, World Health Organization officials have praised Russia for being ahead of the curve in terms of coronavirus tests, with testing underway since the end of January and over 130,000 Russians checked by late March. However, doubts remain over the credibility of Russian testing, with reports suggesting inaccuracies and pointing to an over-reliance on a single state laboratory.

While Russia’s official infection figures indicate little cause for concern, speculation is swirling of a far larger outbreak in the country disguised by the deliberate misdiagnosis of coronavirus victims. Healthcare professionals in Moscow have noted a recent spike in pneumonia cases, which rose 37% year-on-year in January 2020 alone, according to national statistics agency Rosstat. In a video address published on March 19, the head of Russia’s Alliance of Doctors trade union Anastasia Vasilyeva accused the government of lying in order to keep numbers low. The Moscow Health Department responded with denials and calls for Vasilyeva to be investigated.

It is not difficult to see why many remain unconvinced by the official Kremlin data for coronavirus cases in the country. Indeed, Russia’s long history of hiding bad news from its own citizens and the outside world has only served to amplify concerns over the country’s seemingly anomalous coronavirus infection rates.

Inevitably, many have drawn comparisons with infamous cover-ups of the past such as the 1986 Chernobyl disaster. In the days following the April 26, 1986 nuclear accident in Soviet Ukraine, Kremlin officials denied mounting reports of a major catastrophe and instead insisted on proceeding with May Day celebrations in nearby Kyiv and other big cities. Public outrage at this apparent disregard for human life was to prove one of the many factors that contributed to the ultimate collapse of the USSR five years later.

Although the Soviet Union is long gone, the modern Russian information space remains carefully curated by Kremlin censors who set the editorial tone of the nation’s mainstream media. Awkward stories that reflect badly on the authorities are routinely suppressed, creating an environment where conspiracy theories thrive. This is particularly the case in times of crisis such as the current coronavirus pandemic.

There is never a good time to grapple with a global health emergency, but the coronavirus crisis could hardly have come at a worse moment for Russia. The country has two major events scheduled to take place in the coming weeks that both require the kind of mass participation impossible in quarantine conditions. On April 22, Russia is due to hold a nationwide vote on constitutional changes that will allow Putin to continue in office until 2036. Just over two weeks later, Moscow will host a jubilee Victory Day military parade to mark the seventy-fifth anniversary of the Soviet victory over Nazi Germany in WWII.

The significance of both events for the Kremlin cannot be overstated. Putin desperately needs the veneer of popular support in order to legitimize his plans to remain in power indefinitely. This will require a high turnout on April 22, along with a convincingly overwhelming majority.

The Victory Day festivities on May 9 will serve a different but equally important purpose. Under Putin, Victory Day has become the biggest holiday on the Russian calendar. Anticipation builds for months in advance before climaxing with public events drawing huge crowds across Russia and in diaspora communities around the globe.

Over the past two decades, the holiday has evolved from its original communist-era ambiance of dignified remembrance to become a jingoistic celebration of Russian greatness and defiant nostalgia for the Soviet past. To domestic audiences, Victory Day is the perfect antidote for the shame and trauma of the Stalin era. On the international stage, the holiday presents Russia with a rare chance to position itself on the right side of history, while also underlining the country’s Great Power credentials.

In the current climate of sanctions and hybrid warfare, it is also an opportunity for Moscow to refute claims of international isolation. This year’s parade is due to be attended by a range of world leaders including French President Emmanuel Macron, making it a diplomatic coup that Putin will be extremely reluctant to cancel.

Kremlin spokesman Dmitry Peskov has already conceded that the April vote on constitutional changes could be rescheduled if the coronavirus situation deteriorates further. However, the authorities are likely to resist any such delays for fear of fueling political instability or allowing anti-Putin resistance to gather momentum. The various constitutional formalities required to secure Putin’s continued reign have been rushed through in recent weeks with remarkably indecent haste, even by Russian standards. All that remains is the final public stamp of approval, and the Kremlin is clearly in no mood to wait.

If the vote does go ahead as planned, it will likely take place in a climate of forced participation. Vast numbers of teachers, factory workers, civil servants, soldiers, and other state employees will find themselves obliged to brave epidemic conditions and cast their ballots for Putin. They will be joined by millions of pensioners enticed to vote by the promise of future state pensions pegged to inflation. The potential for a major coronavirus escalation is obvious.

The Kremlin’s apparent urgency reflects the increasingly challenging political landscape inside today’s Russia. Putin’s bid to become president for life comes at a time when many Russians are frustrated by a lack of prospects and increasingly hungry for change. Living standards have largely stalled or fallen during the six years since the 2014 attack on Ukraine, while the recent decision to spark an oil war with Saudi Arabia has caused another sharp ruble devaluation. This latest economic blow follows on from last year’s hugely unpopular decision to raise pension ages for Russian citizens.

As the sense of stagnation grows, Putin’s famed popularity can no longer be taken for granted. A poll conducted in January 2020 by Russia’s Levada Center found that trust in the Russian leader had plummeted to 35%, compared to 59% in November 2017.

The Kremlin now finds itself in something of a quandary. With Russia facing a far greater coronavirus threat than official statistics currently suggest, the sensible approach would be to postpone the constitutional vote and drastically scale down the country’s planned Victory Day celebrations. However, concessions of this nature would likely be interpreted as a blow to Putin’s personal authority at a time when he dare not show weakness.

The alternative is potentially even more dangerous. If Russia proceeds with its plans for an April vote and a Victory Day extravaganza on May 9, Putin will run the risk of forcing millions onto the streets while a silent killer looms over the country. Memories of Chernobyl would then be impossible to avoid. Putin needs no reminding that Kremlin efforts to cover up the 1986 nuclear disaster helped bring down the Soviet Union. He must now decide whether to gamble on history repeating itself.