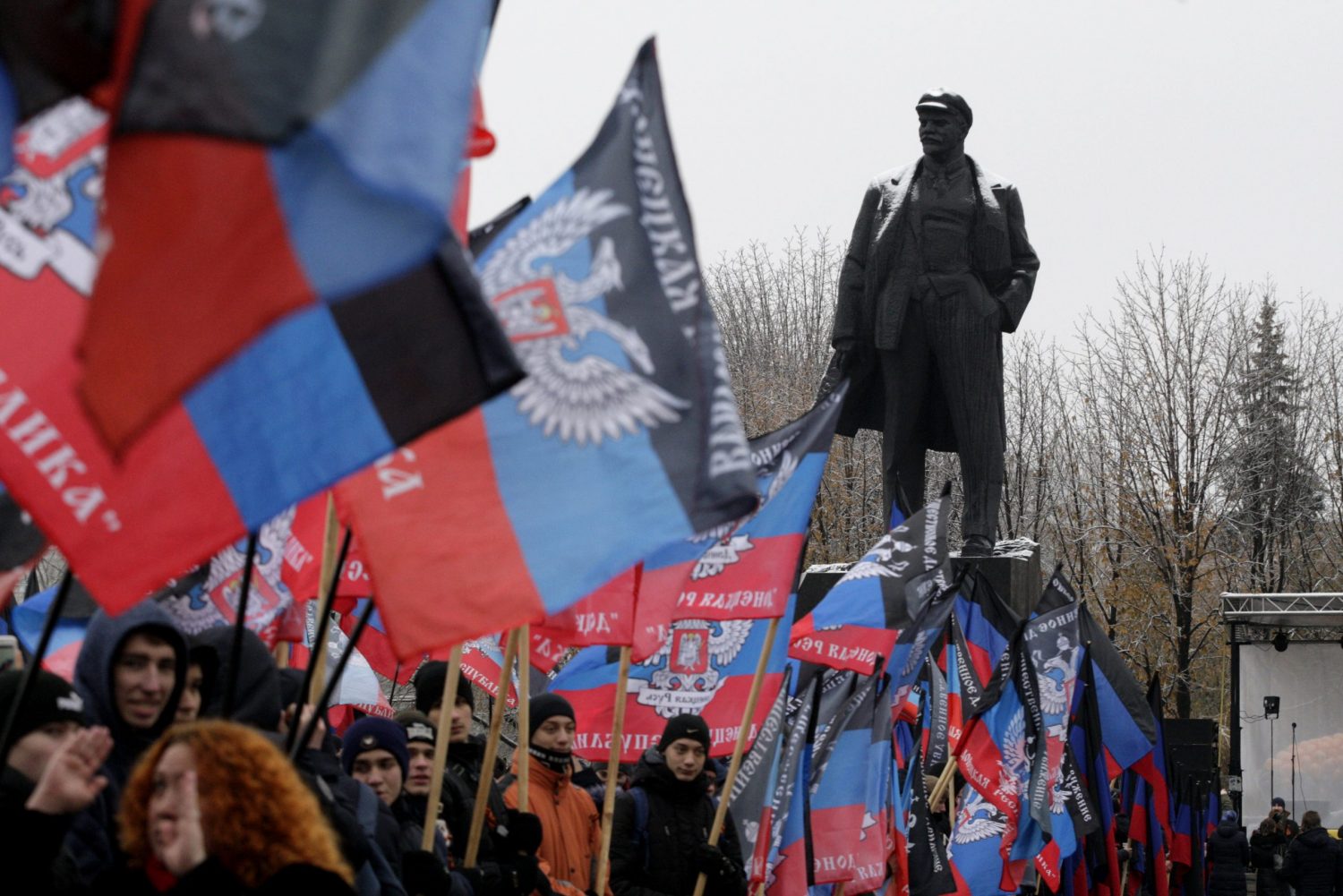 Ukrainian officials have agreed to begin talks with representatives of Russian-occupied eastern Ukraine, marking a significant policy departure following six years of refusals to enter into direct dialogue with the Kremlin-appointed authorities of the breakaway regions. The agreement in question was signed in Minsk on March 11 by representatives of the Trilateral Contact Group, which consists of Ukraine, Russia, and the Organization for Security and Cooperation in Europe (OSCE). Preliminary plans envisage the creation of a new Advisory Council that will feature ten Ukrainian officials and ten representatives from the so-called people’s republics in the east of the country. Russia will reportedly participate in the process as an international observer rather than as a party to the conflict and will have the same supervisory status as France, Germany, and the OSCE. The stated aim of this new Advisory Council is to facilitate dialogue towards the political settlement of the conflict in eastern Ukraine, with an emphasis on preparing the ground for planned local elections.

Throughout the past six years of undeclared war between the two countries, Russian repeatedly called on Ukraine to begin direct talks with the Kremlin-appointed administrations in the occupied east. However, prior to these recent developments, Ukraine had consistently refused to deal directly with separatist officials. Instead, Kyiv’s policy had been to engage exclusively with Russia in order to avoid any contacts that might be seen as legitimizing Moscow’s proxy forces in eastern Ukraine or diminishing Russian responsibility for the conflict as the aggressor state.

News of the plans for a joint Ukrainian-separatist Advisory Council sparked widespread disquiet in Ukraine. President Zelenskyy’s chief of staff Andriy Yermak, who brokered the Advisory Council agreement in Minsk, led attempts to downplay the implications of the step. Appearing on popular Ukrainian political talk show Savik Shuster Free Speech on March 13, he claimed the agreement did not represent legal recognition of the Russian republics and stressed the purely advisory nature of the proposed new body. Nevertheless, the move provoked protests in central Kyiv and an online petition signed by dozens of MPs from President Zelenskyy’s own Servant of the People party calling on him to block the creation of the Advisory Council. Do the Zelenskyy administration’s plans to engage with representatives of occupied eastern Ukraine risk legitimizing the Russian occupation, and what might this mean for the future of the peace process?

Adrian Karatnycky, Senior Fellow, Eurasia Center, Atlantic Council: Faced with the coronavirus crisis and attendant economic recession, President Zelenskyy is desperately seeking to stop the steep decline in his, his government’s, and his parliament’s popularity. He believes he needs a game-changer and thinks this concession will bring peace. It will not. Recognition of the Russian-controlled quisling authorities in eastern Ukraine as legitimate negotiating partners, and of Russia as a guarantor of peace, serves to reduce pressure on Russia by suggesting it is not the aggressor. Moreover, this decision will only weaken and may ruin Ukraine’s chances in international courts, where it has pursued Russia as the aggressor and occupying force in the Donbas region.

Olena Zerkal, Former Ukrainian Deputy Foreign Minister (2014-19): Ever since 2014, Russia has gradually sought to impose its own logic onto the conflict guided by two key principles: “we are not there” and “catch us if you can”. These two narratives closely intertwine and cannot be addressed separately. Despite all their legal gymnastics and reliance on plausible deniability, we managed to prove that Russia is the aggressor. We demonstrated direct military engagement between the Russian armed forces and those of Ukraine, and confirmed the existence of an international armed conflict in eastern Ukraine from 14 July, 2014 at the latest. Thus, Russia has been a party to the Minsk arrangements, the Trilateral Contact Group, and the Normandy talks. Following the logic of its own rival narrative, Moscow always insisted on establishing direct negotiations between Kyiv and the so-called separatist republics. The creation of an Advisory Council is not direct negotiation. However, this is a serious litmus test for Ukrainian society of its readiness to accept the transformation of Russia from aggressor to observer, or even more hypocritically, to the status of mediator. The history of other conflicts around the world demonstrates that this kind of transition cannot resolve the conflict. What it can do is cement the Russian logic of “internal conflict” and, secondly, help the Russian Federation to avoid its liability for international wrongdoings and crimes committed on Ukrainian soil.

Andreas Umland, Senior Fellow, Institute for Euro-Atlantic Cooperation: Looking at the situation from the perspective of my own background in East Germany, this partial recognition by Kyiv of the two so-called people’s republics does not change much in practice. Both the initial categorical non-recognition and later partial recognition of the German Democratic Republic (East Germany) by the Federal Republic of Germany (West Germany) had relatively few practical consequences. Neither non-recognition nor recognition eventually meant much. East Germany remained largely unrecognized until 1972. However, even its recognition as a full UN member, which would be considered a complete capitulation in today’s Ukrainian terms, did not prevent East Germany’s total disappearance in 1990. I am not defending Yermak’s decision, but merely saying that these compromises are not endgames. I would not therefore overestimate the political consequences of Kyiv’s diverging approaches to these puppet regimes, whether under President Zelenskyy or his predecessor Petro Poroshenko.

Alyona Getmanchuk, Director, New Europe Center: Direct talks between Kyiv on the one hand and the so-called Donetsk and Luhansk people’s republics, on the other hand, have been a key Kremlin demand ever since the beginning of the war in 2014. Kyiv avoided this scenario in order to keep Russia accountable for its actions in Ukraine. The idea has always been to prevent Russia from transforming itself (with Ukraine’s blessing) from a conflict participant into an international mediator, much as Moscow did earlier in Moldova. In fact, the absence of direct talks between Kyiv and the separatist authorities is one of the biggest differences between the current conflict in eastern Ukraine and the war that took place in Moldova in the early 1990s. The new agreement reached in Minsk on March 11 is a clear step towards the recognition of the separatist authorities as parties to the conflict instead of Russia. It is the wrong signal to be sending to the Ukrainian public and to the wider world because it enhances Russia’s efforts to depict the conflict in Ukraine as an exclusively internal affair. Having said that, I would also note that it remains unlikely the Ukrainian public will allow President Zelenskyy and his chief negotiator Andriy Yermak to comply fully with Russia’s main demand for official direct talks between Kyiv and the separatist republics. Nor will they let Russia reinvent itself from the aggressor to the mediator. Ukrainians want peace, but the idea of peace at any price remains deeply unpopular in Ukrainian society.

Oleksiy Goncharenko, Ukrainian MP, European Solidarity party: For six years, Putin has promoted the idea that there are no Russian troops in eastern Ukraine, while also emphasizing the supposedly internal nature of the conflict and promoting notions of a “civil war” in Ukraine. All this time, he has been looking for opportunities to distance Russia from the conflict and secure the status of “observer” or “guarantor”. Despite these efforts, there has never been any question that the authorities in Russian-occupied eastern Ukraine are under Moscow’s control. We now appear to be entering a new but familiar stage of the process. Forcing opponents to speak directly with Russian proxies is a trademark Kremlin ploy during conflict negotiations. Before Ukraine, the same scenario played out in Georgia and Moldova. By creating an Advisory Council featuring both Ukrainian and separatist members, Putin will move closer to achieving his goal in Ukraine. Russia will step back from the negotiation process and Ukraine will signal to the world that the Kremlin is not guilty. It really doesn’t matter how this proposed council functions or who eventually participates. The key message will be the existence of the Advisory Council itself. This will not help to achieve peace. In reality, it is more likely to have the opposite effect.

Peter Zalmayev, Director, Eurasia Democracy initiative: The decision to raise the status of the separatist puppet entities in eastern Ukraine to that of negotiating partners severely undercuts Ukraine’s claims made to its Western partners, and in pending international litigation, of being a victim of Russian aggression. It has clearly been Moscow’s cherished goal ever since the launch of the Minsk process to shift the blame for the war onto Ukraine’s shoulders. This way, Russia could wipe the slate clean, including, among a long list of other crimes, its guilt for the downing of flight MH17 in July 2014, which is the subject of court proceedings currently underway in the Netherlands. President Zelenskyy’s decision may now distort that trial’s outcome in favor of the perpetrator. It could also undermine sympathy for Ukraine, along with the country’s credibility, among international audiences.

Image: Flags of the so-called Donetsk People's Republic on display at a rally in Donetsk, Ukraine. REUTERS/Alexander Ermochenko