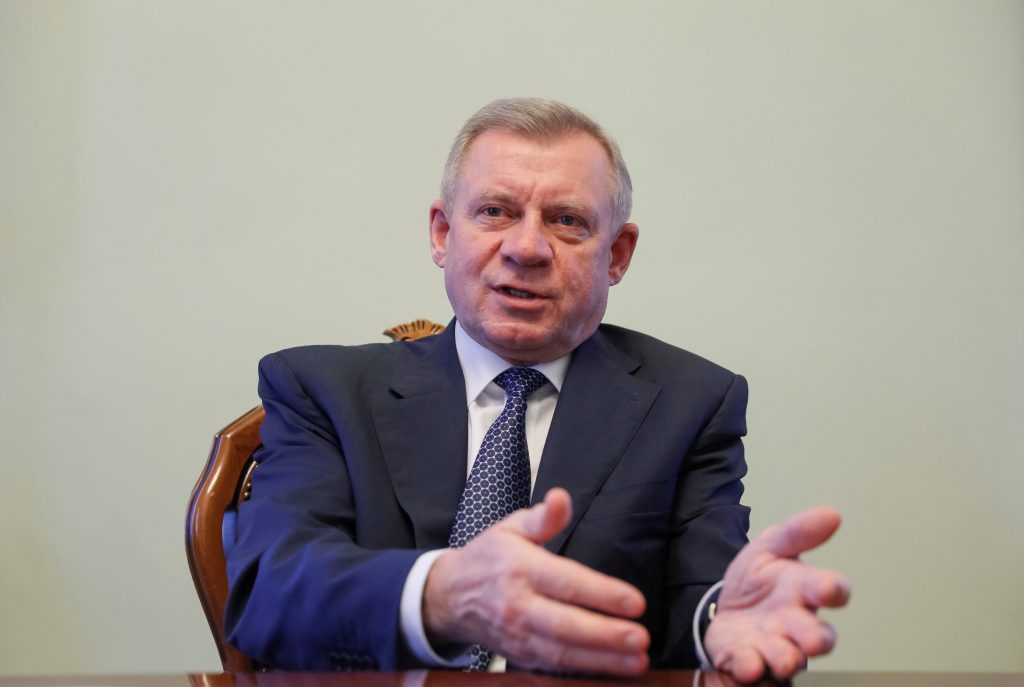 Ukraine’s reform agenda suffered a serious blow on July 1 when Yakiv Smolii, the highly respected governor of the National Bank of Ukraine (NBU), resigned due to what he called “systematic political pressure.” At a time when a wide range of Ukrainian reforms are facing rollbacks and reversals, Smolii and his reformist colleagues at the NBU were among the last reformers still standing. Smolii’s departure now places significant question marks over the country’s future direction.

News of the resignation sent shock waves through Ukraine’s business and political communities. Tomas Fiala, who heads Ukrainian investment management company Dragon Capital, spoke for many when he called Smolii’s exit from the central bank a red line. “We will now postpone all new investments,” commented Fiala. “For the past five months the authorities have been doing the exact opposite of what investors, both domestic and international, expect from them and advise them. This is the last straw. One can only guess what the motives are. It is either complete incompetence or sabotage motivated by Russia.”

Smolii first entered the NBU as deputy governor in 2014 as part of governor Valeria Hontareva’s team. In May 2017, Hontareva was forced out, allegedly due to pressure from Ukrainian oligarchs Ihor Kolomoiskiy and Hennady Boholiubov, whose bank Privatbank she had nationalized in December 2016. Hontareva was later targeted in a series of alarming incidents. She was hit by a car in London, her house outside Kyiv was burnt down, her Kyiv apartment raided, and her daughter-in-law’s car set on fire.

Since taking over at the NBU in 2017, Smolii remained loyal to Hontareva’s reformist mission and her team. As political and oligarchic pressure on the NBU mounted, The most exposed figure was Smolii’s first deputy for banking regulation, Kateryna Rozhkova, who has a reputation as a true iron lady. It was Rozhkova who, together with Hontareva, closed down more than one hundred of Ukraine’s 180 banks from 2014 to 2017 in a major shakeup that won international praise and transformed the fortunes of the Ukrainian banking sector.

Prior to this industry clean-up, it was commonplace for banks in Ukraine to have banking capital equal to about eight percent of banking assets, with owners taking 80-90 percent of assets for themselves as “loans” never to be paid back. Since 2014, the NBU has put a stop to such practices, and the former beneficiaries are not happy about it.

The NBU has also been the driving force behind significant macroeconomic progress in recent years. Ukraine has long suffered from high inflation and an unstable or unsustainable exchange rate. Smolii fixed both problems. Under his leadership, Ukraine’s inflation has fallen to the current level of 1.7 percent a year, the lowest ever recorded in independent Ukraine. With a floating exchange rate, the hryvnia currency has now stabilized at close to 27 hryvnia per US dollar. Moreover, Ukraine’s international currency reserves have surged to USD 28 billion from a low of USD 5 billion in 2015.

For the IMF, the NBU has been the outstanding performer in Ukraine. As the IMF commented in its June 2020 press release announcing a new USD 5 billion standby agreement for Ukraine, “The NBU has skillfully managed monetary policy during a very challenging period. Central Bank independence should be preserved, and monetary and exchange rate policies should continue to provide a stable anchor in the context of the inflation-targeting regime, while allowing orderly exchange rate adjustment and preventing liquidity stress.”

Given this impressive record, why has President Zelenskyy not done more to protect Smolii from undue political interference? First of all, it is important to acknowledge that Smolii is not one of Zelenskyy’s people. There are many in Zelenskyy’s circle who might want such a good job. Secondly, Smolii has adopted uncompromising positions towards Zelenskyy’s alleged oligarch ally Kolomoiskiy. The NBU governor’s resignation now strengthens suspicions that Zelenskyy is unable to say no to Kolomoiskiy.

I know Smolii reasonably well on a personal level. He is a Ukrainian success story. Throughout his career, he has done well and he has done good. As is the case with so many outstanding Ukrainians, he was originally an engineer. As an eminent software engineer in Ukraine in the 1990s, he went into banking. He was one of the founders of Bank Aval, which remains Ukraine’s best bank, and made a fortune selling to Raiffeisen. He subsequently moved to set up another bank, Prestige Group, which he also sold at a profit. Then, as a good patriot, he decided to serve his nation.

Nobody is even suggesting that Smolii has committed any economic crime or profited unduly from leading the NBU. On the contrary, he is recognized as being independently wealthy. This soft-spoken man had no reason other than patriotism to put himself in the firing line at the central bank and accept the enormous pressures of the governor role.

In his letter of resignation to President Zelenskyy, Smolii stated that he could no longer “fulfill my obligations to manage the activities of the National Bank and its cooperation with other state agencies. For a long time, systematic political pressure has been exerted on the National Bank of Ukraine. With my resignation, I seek to warn against other attempts to undermine the institutional foundations of the central bank in Ukraine.”

Anders Åslund is a senior fellow at the Atlantic Council and author of the new book “Russia’s Crony Capitalism: The Path from Market Economy to Kleptocracy.” Follow him on Twitter anders_aslund.

Moscow plans to issue one million Russian passports to residents of Russian-occupied eastern Ukraine by the end of 2020 in a bid to prolong the six-year conflict between Russia and Ukraine indefinitely.