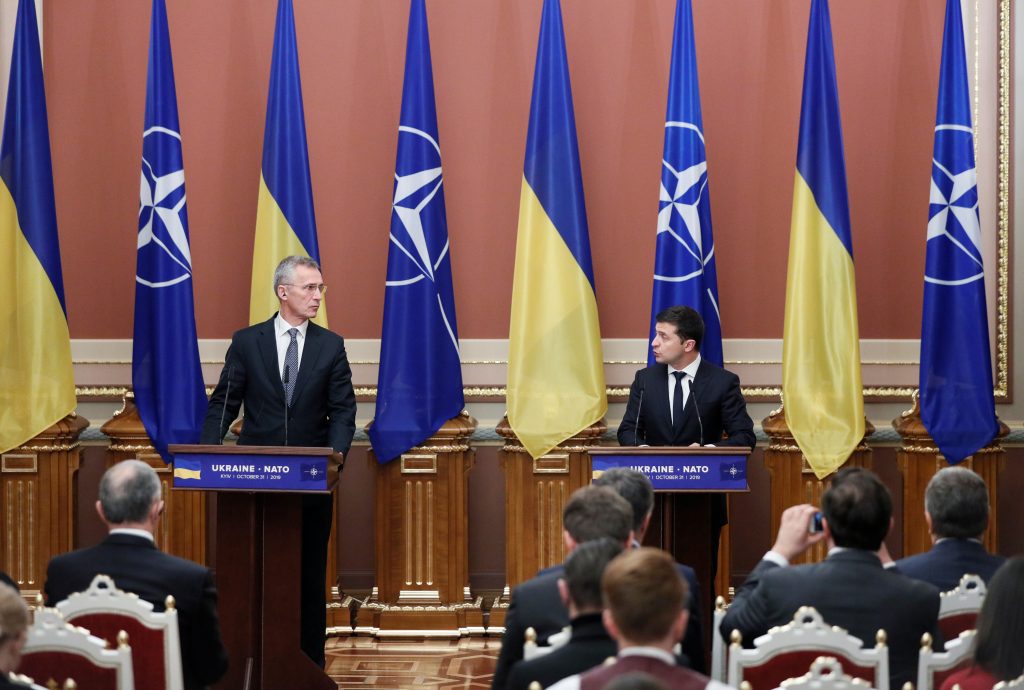 Ever since the outbreak of hostilities with Russia in 2014, Ukraine has looked to strengthen its ties with the NATO military alliance. While the alliance’s response to the conflict has been understandably cautious, there has also been significant progress in the relationship with Kyiv. Institutional cooperation has intensified, and a number of individual NATO member states have sent military missions to Ukraine to provide training and support for the country’s transition towards NATO standards.

The changing tone of Ukraine’s relationship with NATO over the past six years has been mirrored by a sharp swing in Ukrainian public opinion. Prior to 2014, relatively few Ukrainians wanted the country to join NATO, with support typically hovering in the low double digits. This situation was completely transformed by the shock of Russian aggression. In the radically altered geopolitical environment created by the Kremlin seizure of Crimea and Russia’s hybrid intervention in eastern Ukraine, opinion swung decisively in favor of Ukrainian NATO membership. If a referendum on the subject took place today, those backing membership would be likely to secure a commanding majority.

Ukraine’s immediate prospects of gaining membership are virtually nonexistent, but this has not prevented the country from taking numerous steps towards this ultimate objective. Most notably, Ukraine’s NATO membership ambitions were written into the Ukrainian Constitution in February 2019 via an amendment that also confirmed the goal of eventually joining the European Union.

NATO integration has remained official Ukrainian policy following the April 2019 election of President Zelenskyy. In early 2020, the country was said to be on track to secure NATO Enhanced Opportunity Partner status later in the year if the pace of reforms was maintained. However, recent political changes in Kyiv have reopened the debate about Ukraine’s commitment to NATO integration and raised fresh doubts over the country’s broader geopolitical trajectory.

President Zelenskyy’s surprise dismissal of his first government on March 4 left many Ukraine observers disorientated. Minister of Defense Andriy Zahorodniuk was among the many ministers to lose their jobs, despite having a strong reputation as a reformer. Zahorodniuk’s replacement Andriy Taran then raised eyebrows during his March 11 introductory address. Speaking to Ministry of Defense and General Staff officials, Taran said adapting the Ukrainian military to NATO standards in the near future was an “ambitious but unachievable goal.”

Many saw this as an ominous indication of an impending geopolitical U-turn. Reaction to Taran’s comments was so heated that the Ministry of Defense felt obliged to issue a subsequent clarification accusing Ukrainian politicians and the media of intentionally misinterpreting the minister’s statements and reaffirming the new government’s commitment to close cooperation with NATO.

While officials were busy denying any major shifts in Ukraine’s approach towards NATO ties, an additional scandal was brewing at the ministry’s own Reform Office, which was created in 2015 to aid the modernization of the Ukrainian military, including the transition to NATO standards. In a statement released on April 1, Reform Office head Olesya Favorska accused the ministry’s new leadership of blocking the work of the Office. Meanwhile, Ministry of Defense representatives have questioned the effectiveness of the Reform Office and spoken of the need for a complete reboot.

These incidents come at a time when Ukraine’s broader approach to the ongoing war with Russia remains shrouded in controversy. Speculation over a possible change in policy has raged ever since political outsider Volodymyr Zelenskyy’s 2019 landslide victory in Ukraine’s presidential election. Crucially, his success owed much to campaign trail promises of ending the conflict. Recently revealed plans to engage in direct talks with Russia’s proxies in eastern Ukraine have encountered particularly vocal opposition, with critics including dozens of MPs from within President Zelenskyy’s own parliamentary party.

The coronavirus pandemic has since forced a pause in the negotiations around this initiative, but the urgent reaction it provoked reflects widespread concerns that Zelenskyy may be willing sacrifice Ukraine’s Euro-Atlantic integration ambitions and compromise the country’s long-term independence in return for progress towards peace.

Officially, at least, there has been no change in Ukraine’s commitment to closer NATO integration. Nevertheless, the issue remains subject to considerable conjecture. Beyond the political dimension, the practicalities of the integration process also create room for confusion. Adopting NATO standards is widely recognized as essential if Ukraine is to have any chance of succeeding in a future membership bid. However, Minister Taran has correctly noted than even within NATO itself, member countries have not introduced all NATO standards into their respective armies.

With over 2,000 NATO standards available for consideration, the question arises of Ukraine’s specific strategy towards adoption. Over 200 are listed in the existing Ukraine-NATO Partnership Goals, but other NATO standards had been adopted by 2020 that do not feature on this list. Ukraine would certainly benefit from a more methodical approach to this issue that could provide an accurate and objective picture of progress towards NATO integration based on specifics rather than populist slogans or political statements prone to misinterpretation.

At present, attempts to assess the status of Ukraine’s NATO integration can differ depending on whether the information is coming from the Ministry of Defense, the Office of European and Euro-Atlantic Integration, the Ministry of Foreign Affairs, or Ukraine’s Mission to NATO. In other words, Ukraine lacks a unified approach. This hampers efforts to monitor the implementation of NATO standards in the Ukrainian military and creates the potential for political mischief.

In order to counter this, Ukraine should develop a clear and transparent monitoring mechanism for the implementation of NATO standards, complete with realistic and achievable short- and medium-term goals. Such a step would bring much-needed clarity to government communications and enable state officials to speak with one voice on what is a hugely complex subject that lies at the heart of Ukraine’s wider geopolitical strategy. It would also help to remove the necessity of issuing periodic clarifications regarding the country’s continued commitment to the Euro-Atlantic course established in 2014.