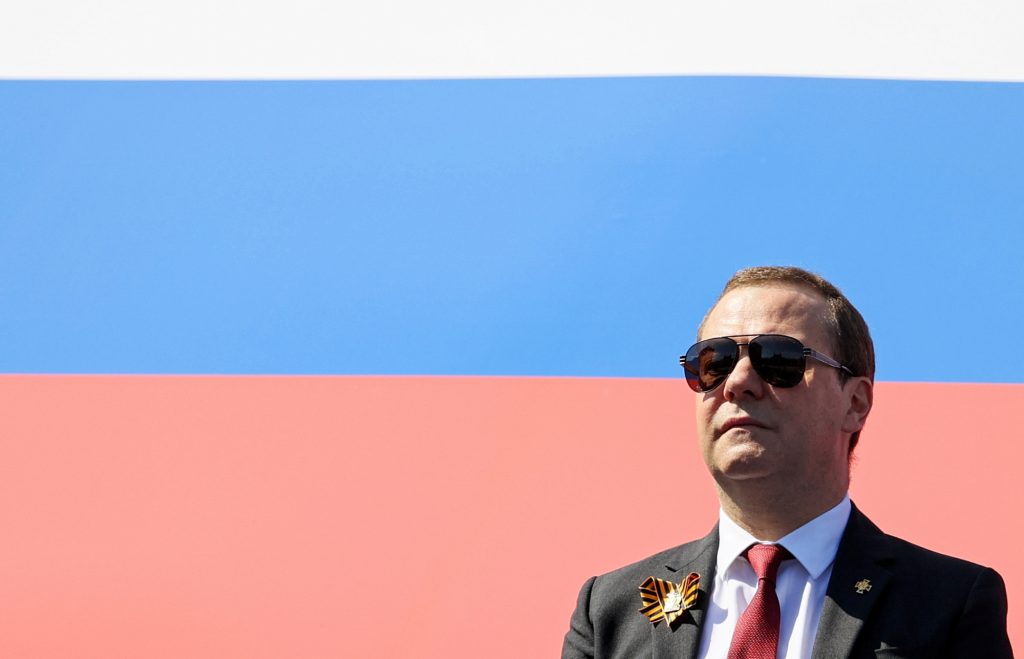 During the first nine months of Russia’s Ukraine invasion, Russian President Vladimir Putin and former president Dmitry Medvedev have developed a shtick worthy of a Rodgers and Hammerstein musical. Once seen in the West as a moderate and a source of hope for better ties with Russia, Medvedev now plays the role of Putin’s bad cop, using the kind of overtly fascistic language that makes the Russian dictator’s own menacing speeches appear positively moderate by comparison.

Just recently, Medvedev compared Ukrainians to “cockroaches.” In early November, he opined that Moscow was fighting “crazy Nazi drug addicts” in Ukraine, whose Western supporters had “saliva running down their chins from degeneracy.” Russia’s task, he declared, was to defeat “the supreme ruler of Hell, whatever name he uses: Satan, Lucifer, or Iblis.” The identity of this supreme ruler of Hell is unclear, but presumably Medvedev had either octogenarian US President Joe Biden or mild-mannered Ukrainian President Volodymyr Zelenskyy in mind.

In contrast, Putin consciously avoids sounding overtly unhinged despite the often far-fetched nature of his public pronouncements. Examples of Putin’s baseless statements include his claim in February 2022 that Ukraine posed a mortal threat to Russia, and his lengthy article in mid-2021 insisting that Ukraine had no historic right to exist as an independent state. However, unlike Medvedev, Putin is careful to make sure his arguments are at least vaguely plausible. The Russian ruler also attempts to use recognizably statesmanlike language in order to portray the invasion of Ukraine as a difficult but justified foreign policy decision.

Putin’s speaking style is also worthy of note. In contrast to twentieth century dictators like Benito Mussolini and Adolf Hitler who were notorious for raving and gesticulating wildly, Putin’s often outrageous assertions are delivered in a soft-spoken and understated tone that creates the impression of a level-headed and entirely rational politician.

The annual Valdai Discussion Club held in Moscow this October was a case in point. Putin’s keynote address was a diatribe against the West, which he accused of attempting to eliminate the rich diversity of cultures around the world. Putin claimed he stood for traditional values, the dignity and sovereignty of all peoples, and the free exchange of science and cultural achievements. He assured listeners that he was against isolationism and any kind of racial, ethnic, or religious intolerance.

This was Putin the impeccable humanist on display. It would be difficult to imagine a figure further removed from Medvedev’s bloodcurdling proclamations. Judging by Putin’s demeanor at the Valdai event, few would believe this was the same man who had ordered the destruction of Grozny, Aleppo, and Mariupol, or who just months earlier had unleashed the largest European conflict since World War II.

While Medvedev uses the language of the gutter, Putin adopts the academic tone of the historian and disguises his imperial aggression by arguing at length that Russians and Ukrainians are actually “one nation.” He expresses exasperation at the alleged oppression of Ukraine’s Russian-speaking population, and positions his invasion as an unfortunate necessity. Whereas Medvedev is the voice of righteous fury, Putin is the voice of reason.

Unfortunately for the Kremlin, Putin and Medvedev’s good cop, bad cop routine is now failing in the West. The international media spotlight of the past nine months has done much to expose Russian lies and reveal the naked imperial ambition behind Moscow’s talk of phantom fascists and oppressed minorities. Few remain receptive to Putin’s convoluted explanations for the invasion of Ukraine other than ideological allies and those still willing to buy into the Kremlin’s conspiratorial narratives.

The contrasting rhetoric being offered up by Putin and Medvedev has proven more successful among domestic audiences and has helped convince millions of Russians that the Kremlin authorities know what they are doing in Ukraine. Raised in an authoritarian political culture, many Russians find Medvedev’s extremism emotionally appealing and are persuaded by Putin’s more measured approach.

The impact of this strategy is plain to see. While the Russian death toll for the invasion of Ukraine approaches 100,000 and the Russian economy continues its downward slide, there is no sign of any significant domestic opposition to the war. As more Russian sons and husbands return from Ukraine in coffins, the durability of the Kremlin duo will be further tested, but at present their double act appears highly effective.

Alexander Motyl is a professor of political science at Rutgers University, Newark. Dennis Soltys is a retired Canadian professor of comparative politics, living in Almaty.

Ukraine must be allowed to strike back against targets inside Russia

In order to defeat Putin and end the war, Ukraine must be allowed to strike back inside Russia. At present, this is not possible due to restrictions imposed by Ukraine’s overly cautious international allies, writes Ira Straus.