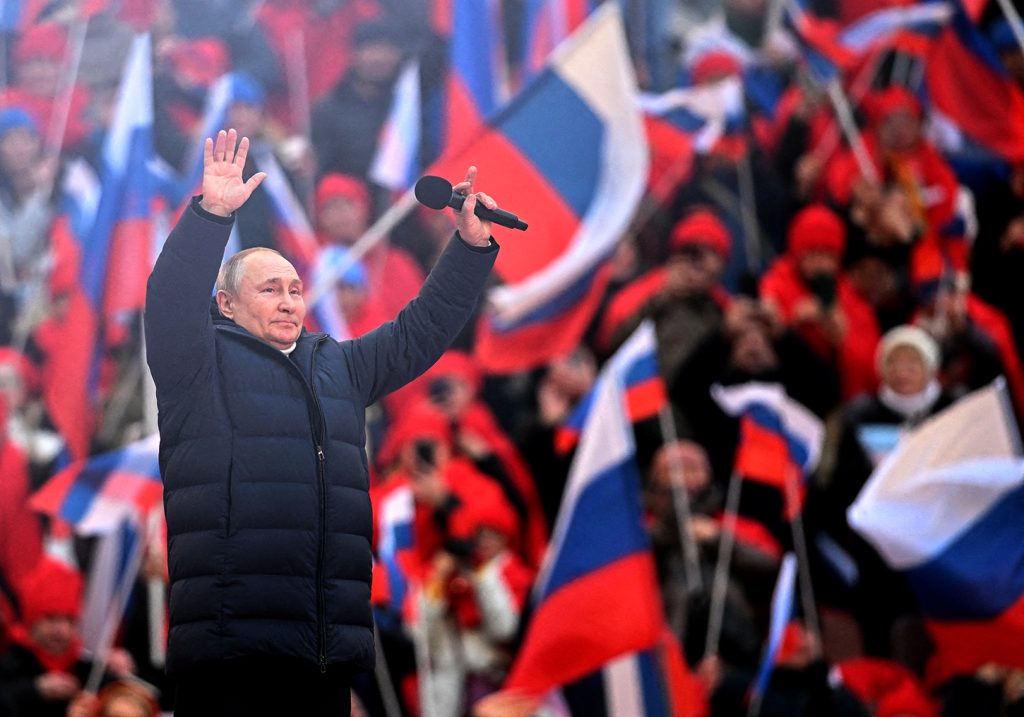 When Vladimir Putin first came to power at the turn of the millennium, one of the main challenges he faced was the need to repair battered Russian national pride following a decade of post-Soviet turbulence marked by economic collapse and endless revelations of Soviet-era crimes against humanity.

Putin’s solution was disarmingly simple but brilliantly effective. He set out to revive Russian patriotism by building a modern national identity around the Soviet Union’s role in the defeat of Nazi Germany. While WWII had always played a prominent role in shaping the national psyche, under Putin it would ascend to new heights as the defining moment in Russian history.

Far from being ashamed of their Soviet past, Russians were now told that they could be proud of belonging to a “victor nation.” Instead of dwelling on the millions of innocent victims murdered during the Stalin era, they should honor the righteous heroics of the Soviet war effort.

This veneration of the Soviet WWII experience proved hugely popular with the Russian public. Over the past two decades, it has evolved into a quasi-religious cult complete with its own lexicon, rituals, monuments, and holy days. In 2020, it even received its very own cathedral.

As with any religion, heresy is not tolerated. Deviations from the officially approved narratives of the victor nation are subject to criminal prosecution and blasphemy is dealt with ruthlessly. In Putin’s Russia, there is no greater crime than to question the sanctity of the Soviet victory over Nazi Germany.

The kleptocratic Putin regime has used this victory cult to establish the illusion of an ideological commitment to fighting fascism. In line with this anti-fascist posturing, opponents of the current Russian authorities are routinely branded as fascists and Nazis. These vague but emotive labels have been attached to a dizzying array of adversaries ranging from domestic dissidents to recalcitrant neighbors.

Nowhere is modern Russia’s fixation with “phantom fascists” more immediately apparent than in Kremlin policy toward Ukraine. For years, Moscow has equated Ukrainian national identity with fascism while depicting Russian aggression in Ukraine as a continuation of the struggle against Nazi Germany.

The Kremlin’s absurd claims ignore the inconvenient reality that today’s Ukraine is a vibrant democracy with a popularly elected Jewish president and a far-right fringe that consistently fails to secure more than 2% in national elections. Instead, Russian audiences are encouraged to regard the present invasion of Ukraine as an anti-fascist crusade to rid the world of Hitler’s heirs.

Moscow’s efforts to portray the war in Ukraine as a battle against Nazism have been widely mocked and comprehensively rejected by the international community. These anti-fascist pretensions are rendered even more ridiculous by the country’s own steady descent under Putin into full-blown fascism. Indeed, the current war in Ukraine has led many to conclude that modern Russia is following in the footsteps of the fascist dictatorships it claims to oppose.

Defining whether a regime qualifies as fascist is no easy matter. Indeed, as far back as 1944, George Orwell was complaining that the word “fascism” had become “almost entirely meaningless” and was simply used as a synonym for “bully.” Nevertheless, most definitions of fascism would indicate a dictatorial system of government marked by nationalism, militarism, xenophobia, revisionism and expansionism. Putin’s Russia unquestionably ticks all of these boxes.

Russia completed its transition from authoritarianism to dictatorship following constitutional changes adopted in 2020 via a sham referendum that allowed Putin to remain in power until 2036. This confirmed his status as president for life and extinguished any lingering hopes regarding the possibility of Russia’s future democratic evolution. Since 2020, political opposition, independent media, and all forms of public protest have been subjected to new levels of suppression in Russia and ruthlessly crushed.

This process has accelerated in recent months as the Kremlin has sought to silence domestic opposition to the war in Ukraine. Draconian censorship laws have introduced criminal responsibility for any deviations from the official government narrative of a “special military operation” to “de-Nazify” Ukraine. Meanwhile, Putin’s speeches to justify the invasion have increasingly echoed the rhetoric of twentieth century fascist regimes. This has included calls for the purification of the nation and vicious denunciations of national traitors.

Throughout his reign, Putin has consistently mobilized toxic nationalism as a key building block of his dictatorship. This process began in the early days of Putin’s presidency when he brought back the Soviet national anthem. It has continued to gain momentum ever since.

Following Ukraine’s 2004 Orange Revolution, the Kremlin embraced conservative nationalism as a safeguard against any similar pro-democracy uprisings inside Russia. This led to the formation of groups such as “Nashi,” a virulently nationalistic pro-Kremlin youth group that was widely compared to the Hitler Youth. In addition to the aforementioned victory cult surrounding WWII, Putin has also elevated the role of the Russian Orthodox Church in national life and promoted the idea of Russia as a “distinct civilization.”

The rampant nationalism of the Putin era has been accompanied by growing militarism fostered by everything from films and TV serials to public holidays and the national curriculum for Russian schoolchildren. The militaristic mood in the country has reflected the realities of Putin’s foreign policy, with Russia at war for much of his reign. Prior to the current full-scale invasion of Ukraine, the country had waged a series of wars in Chechnya, Georgia, eastern Ukraine and Syria.

This militarism is now being further fanned in Russia by the use of the letter “Z” which has emerged as a symbol of Putin’s war in Ukraine after being used to identify vehicles within the invasion force. Russians are being encouraged to display Z’s wherever possible to show their support for the war, with many commentators comparing the increasingly ubiquitous letter to the Nazi Swastika.

Efforts to generate popular support for the war effort appear to be working. A recent survey conducted by Russia’s only independent pollster, the Levada Center, found that 81% of Russians back the invasion. These findings are confirmed by a steady flow of videos and posts on social media in support of the war. At the same time, Russian anti-war protests have failed to gather any momentum and have instead remained underwhelming.

As Putin’s Russia has moved closer to traditional definitions of fascism, the regime has increasingly embraced xenophobic narratives designed to dehumanize Ukrainians as the country’s most significant national enemy. Indeed, an essay published by Putin himself in July 2021 denying Ukraine’s right to exist and claiming Russians and Ukrainians are “one people” merely put into writing the racist beliefs he has long held and espoused. In addition to depicting Ukrainians as Nazis and extremists, Russian propaganda has long rejected the legitimacy of Ukraine as an independent state and dismissed the entire concept of a separate Ukrainian national identity as a foreign plot meant to divide and weaken Russia.

Putin’s revanchist foreign policy goals closely fit the fascism template and directly echo the revisionist agenda pursued by Adolf Hitler almost a century earlier. Like the Nazi leader before him, Putin has openly expressed his desire to challenge what he sees as the unjust verdict of a lost war. While Hitler sought to undo the Treaty of Versailles, Putin’s objective has been to reverse the outcome of the Cold War. Both dictators have framed their expansionist policies as sacred missions to rescue ethnic kinsfolk from artificial separation and foreign oppression.

Putin refers to the breakup of the USSR as “the disintegration of historical Russia” and seeks to reunite what he regards as Russia’s rightful inheritance. First and foremost, this means reconquering Ukraine. The Russian ruler has sought to justify his aggressive foreign policy by claiming that large parts of today’s Ukraine were erroneously attached to the country by Vladimir Lenin during the early years of the Soviet Union. In other words, the current invasion is merely the latest and most extreme expression of Putin’s long-stated expansionist aims.

The disastrous results of Russia’s descent into fascism are now clear for all to see. In addition to transforming Russia into a dictatorship, Putin has unleashed a war of annihilation in neighboring Ukraine that both US President Joe Biden and his predecessor Donald Trump have condemned as genocide.

Russian war crimes in Ukraine have stunned global audiences but the atrocities we are now witnessing should really come as no surprise. On the contrary, they are the logical consequence of a dictatorial regime that has enthusiastically embraced nationalism, militarism, expansionism, and anti-Ukrainian xenophobia for many years in plain sight.

The international community must now urgently respond to the grave threat posed by Russian fascism before it is too late. This means dramatically escalating sanctions while providing Ukraine with the weapons it needs to defend itself. Vladimir Putin pretends to be “de-Nazifying” democratic Ukraine, but it is clearly Russia itself that requires “de-Nazification.”

Taras Kuzio is a Research Fellow at the Henry Jackson Society and author of the recently published “Russian Nationalism and the Russian-Ukrainian War.”