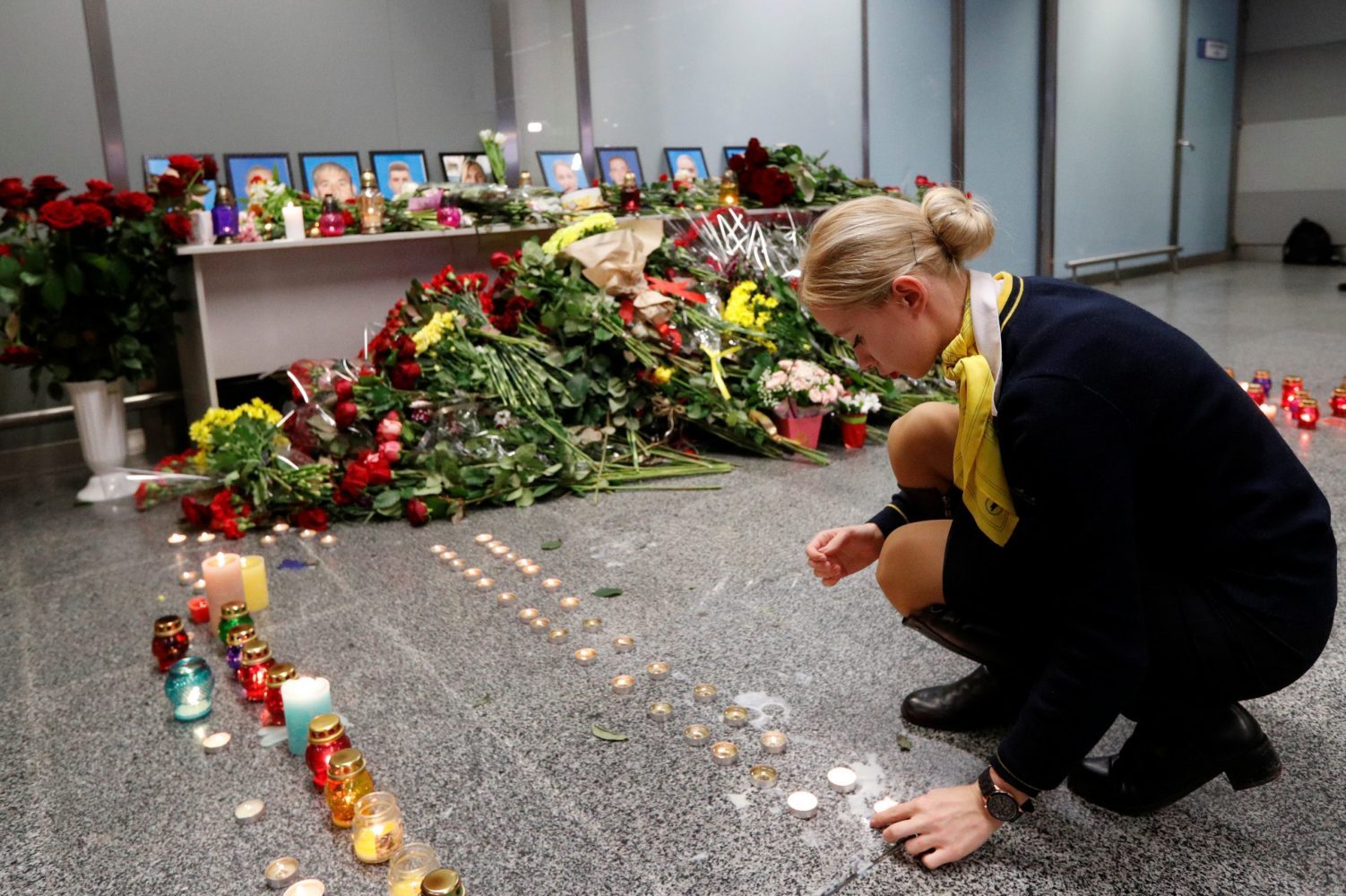 A collegue of the flight crew members of the Ukraine International Airlines Boeing 737-800 plane that was shot down by Iran places a candle at a memorial at the Boryspil International airport outside Kyiv, Ukraine January 8, 2020. REUTERS/Valentyn Ogirenko

There is a certain irony in the fact that the downing of an airliner from a country that underwent a people power revolution against repression and corruption–Ukraine–may now lead to upheaval in Iran. In the days following the tragic January 8 downing of Ukrainian International Airlines PS752, protests in Iran have escalated in dramatic fashion, starting on university campuses and spreading into the streets.

Anger has focused on the Iranian government’s attempts to cover up the reasons for the Ukrainian plane crash. At first, the regime said it was due to a mechanical fault. In the face of evidence uncovered by Ukrainian investigators on the ground and from other sources, their hand appears to have been forced, leading to an admission that the airliner was hit by a missile fired from an Iranian military base.

The fact that most of the 176 people on board the Tehran-Kyiv flight were Iranians or people with Iranian roots heightened the sense of loss in Iran, sparking outrage in a country where people were already on the brink. The current wave of unrest started late last year over steep spikes in gas prices and prompted what Amnesty International described as a “bloody clampdown” from the regime.

In the wake of the PS752 tragedy, public fury has escalated. Crowds in Tehran were heard directing chants of “the people’s shame” at the Islamic Revolutionary Guards Corps. There have been calls for Supreme Leader Ayatollah Ali Khamenei to resign and for those responsible for the downing of the jet to face justice.

Amid the outpourings of anger and grief, the disaster also raises troubling questions about aviation security and the apparent failure to learn from past tragedies of this nature. From almost the moment the UIA Boeing disappeared over the skies of Tehran, similarities with the attack on flight MH17 over eastern Ukraine in 2014 were startling. Both aircraft disappeared with no sign of trouble from the cockpit crew or from data collected by the aircraft’s automated systems. The respective crews had no time to react. The voice and data recorders stopped suddenly at the time of being struck.

Both flights were flying over active conflict zones. In the case of MH17, the Amsterdam to Kuala Lumpur flight was flying just above closed air space in eastern Ukraine when it was struck by a Russian BUK missile, killing all 298 people aboard. The Dutch Safety Board would later criticize Ukraine for not completely closing its air space to civilian aviation given the intensity of the fighting on the ground below at the time.

In the case of PS752, a number of airlines had continued to take off from Tehran ahead of the Ukrainian airliner. However, others had suspended operations to Iran a few days beforehand, citing safety concerns. Even though missiles were launched from the area hours before, there was no move on the part of Iran’s civil aviation authority to close the airspace to non-military traffic.

Another astonishing similarity is the type of missile used to down the two airliners. Both the BUK missile and the Tor-M1 missile system – also known by the NATO reporting name of SA-15 Gauntlet – were Russian-built and used the same technology to disable their targets, exploding close to impact and sending shrapnel into the fuselage.

While Russia remains in denial over MH17, Iran’s attempts to escape responsibility soon ran aground due to the circumstances of the tragedy. Unlike the situation in eastern Ukraine five years ago, flight PS752 was hit while flying through airspace that was under intense surveillance by Western intelligence agencies due to the country’s confrontation with the United States.

Crucially, during its crash to the ground and in the immediate aftermath, the Boeing was documented by Iranian citizen journalists who shared their videos and images widely. Ukrainian investigators also gained rapid access to crash site and were able to collect damning proof of a missile strike before the authorities could bulldoze the evidence.

After three days of denial, the Iranian authorities probably concluded that their position was unsustainable and admitted that the cause of the tragedy was an Iranian missile. However, in an apparent attempt to tread a fine line, they also blamed a mechanical failure in the Boeing plane and American “military adventurism.” Even with these attempts to qualify their responsibility, the Iranian authorities still managed to do something their Russian counterparts have not yet done – namely to acknowledge culpability in the downing of a civilian airliner.

This is a positive first step. The days and months ahead will demonstrate whether Tehran is prepared to be fully transparent and allow investigators complete and unfettered access to the crash site and all of the evidence. This will include primary military radar data, which could show the exact fight path of the doomed airliner. If Iran cooperates, it will be putting further distance between itself and the Kremlin. Russia has refused several requests from Dutch investigators to turn over radar data relating to the 2014 MH17 disaster. Moscow has also changed its story several times regarding how the Malaysian airliner was shot down.

The quest for MH17 justice will return to the spotlight in spring 2020. A criminal case is set to begin in The Hague starting March 9. So far, three Russians and one Ukrainian have been charged. All of the suspects are believed to be in Russia or Russian-controlled parts of Ukraine, and are not expected to be extradited. The case will likely drag well into 2021. In an indication of the difficulty of collecting evidence in conflict zones, Dutch investigators continue to issue appeals for eyewitnesses in Ukraine to come forward with evidence or testimony related to MH17.

The anger and the sorrow over flight PS752 underline the urgent need to learn the lessons from such tragedies. It is vital that the civil aviation community implement immediate steps to make flying safer during times of conflict. Currently, there are about a dozen conflict areas in the world where crews should not enter airspace. Regulations clearly need to be tightened.

In the wake of this latest tragedy, Silene Fredrikzs-Hoogzand, who lost a family member in the MH17 attack, expressed the sense of despair over the failure to prevent a repeat of the 2014 disaster. “Deja Vu. The question was not if but when this would happen again. Again, no closure of airspace. Again, flying over a conflict zone. And again, no responsibility taken. Again, so many families in despair. Our hearts are with them.”

Michael Bociurkiw is the former spokesperson for the OSCE Special Monitoring Mission to Ukraine and a global affairs analyst.

The shooting down of Malaysia Airlines flight MH17 over Ukraine on July 17, 2014, transformed a localized post-Soviet conflict into a major global crisis. With victims from eleven different countries including 189 Dutch citizens, the international backlash was prompt and marked a clear escalation in the confrontation between Russia and the West over the war […]

“You Can’t Get Away with Something Like This,” Families of MH17 Victims Remind Russia

“It is very sad and it doesn’t get easier with each passing year…the roll call of the 298 names just leaves you speechless. But we will continue to fight, because you can’t get away with something like this.”

Kremlin Panics after Dutch Report, and It Should

The report of the Dutch-led investigation team on the shoot down of Malaysian Airlines Flight 17 over eastern Ukraine offered a momentary glimpse into the true nature of the proverbial riddle wrapped in a mystery inside an enigma. Instead of denying any Russian involvement in the death of 298 people in July 2014, a number […]