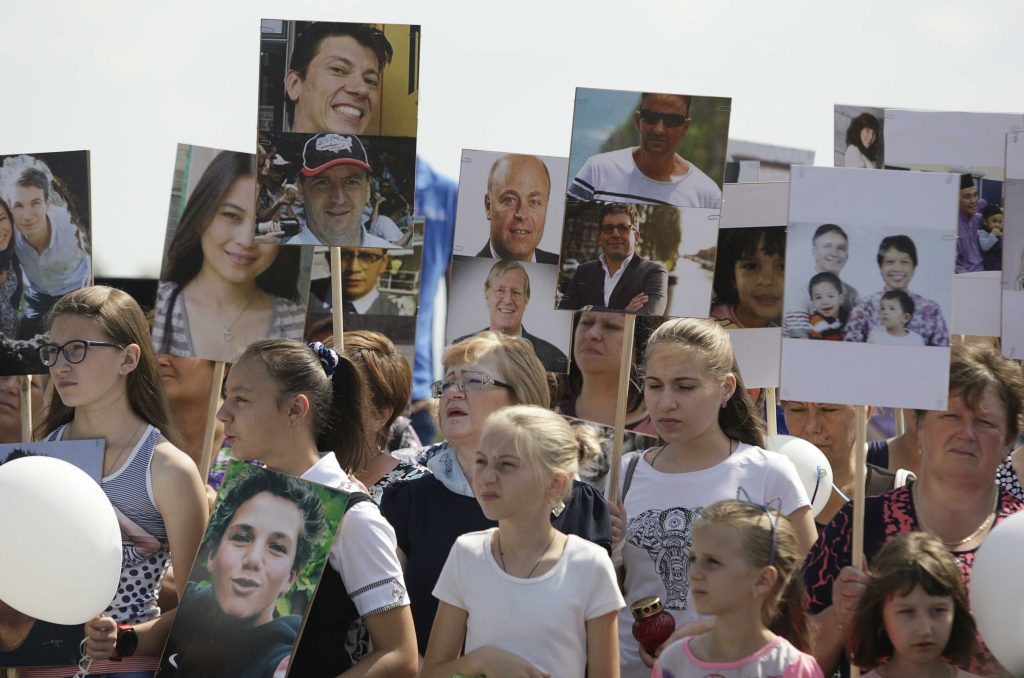 People gather near a monument for the victims of the Malaysia Airlines flight MH17 plane crash to mark the fourth anniversary of the accident near the village of Hrabove (Grabovo) in Donetsk Region, Ukraine July 17, 2018. REUTERS/Alexander Ermochenko

A year ago today I felt as if a large circle in my life had been completed.

At a new memorial park near Amsterdam Airport dedicated to the 298 victims of Malaysia Airlines flight 17, I stood among the still-grieving families as the names of the passengers were read one by one. As I scanned the hundreds of people assembled, I noticed some children with just one parent, possibly an indication that they had lost a mother or father in the crash on July 17, 2014. It made me incredibly sad. The park features 298 trees for each of the victims and a large field of bright sunflowers, representing the crash site in eastern Ukraine. Because the site is located in an active war zone, few of the relatives have managed to visit in the search for some sort of closure.

Having been one of the first of a team of international observers on the scene in rebel-held Donetsk, we had very little connection with the victims. But that gradually changed, as through circumstances, I began to meet some of the families. Many have shared their tragic stories with me. But there is one thing that all the families are still desperately seeking, and that is justice.

What an eerie coincidence that the historic summit between US President Donald Trump and Russian President Vladimir Putin was held a day before the fourth anniversary of the downing of MH17. Ukraine, of course, is a major source of disagreement between the two presidents. One would have expected to hear the leader of the free world at least mention one of the worst crimes in aviation history. He did not. He didn’t even mention Ukraine.

What is even more concerning is that the summit ended with no indication from Trump that the United States will demand the extradition of the twelve Russian intelligence officers indicted by the US Justice Department for meddling in the 2016 presidential election. Russia doesn’t extradite its citizens and this will more than likely be the case with the fifty or so Russian suspects expected to be identified by the Dutch-led criminal investigation into MH17. The Dutch have assumed jurisdiction over the case and are expected to establish a Lockerbie-style court once the criminal investigation completes its work.

So what are the established facts so far? Malaysia Airlines 9M-MRD crashed on July 17, and in another eerie twist, was destroyed exactly on the seventeenth anniversary of its entry into service with the airline. Since then, an independent Dutch-led investigation, which took into account the forensic findings of other credible bodies such as Bellingcat, has established that the Amsterdam to Kuala Lumpur flight was brought down by a Buk-type missile belonging to the Russian army. It was launched from rebel-held Donetsk oblast from a missile-launching convoy which originated and was returned to a missile base in western Russia.

Investigators still have a significant amount of work to build a solid case that can stand up to the rigors of an international trial court. To that end, the Joint Investigation Team has asked for additional witnesses and others with useful information to come forward.

In the meantime, a case on behalf of several dozen families is being presented to the European Court of Human Rights in Strasbourg.

Despite the solid evidence, Russia continues to deny involvement and has refused to fully cooperate with the investigation.

But the families are determined. Said the Dutch chairman of the committee representing the families who lost two children and his in-laws in the crash: “The families shall not give up, shall not be silenced. Those who are responsible have to be brought to justice.”

Another relative messaged me today from the memorial park: “It is very sad and it doesn’t get easier with each passing year…the roll call of the 298 names just leaves you speechless. But we will continue to fight, because you can’t get away with something like this.”

Michael Bociurkiw is the former spokesperson for the OSCE Special Monitoring Mission to Ukraine. He was a member of the OSCE team that arrived at the MH17 crash site some twenty-four hours after the plane came down. He tweets @WorldAffairsPro.

An incomplete end to the MH17 tragedy

Aside from the blowback from Russia and its refusal to cooperate, there are a couple of storm clouds on the horizon for the resolution of the MH17 tragedy.