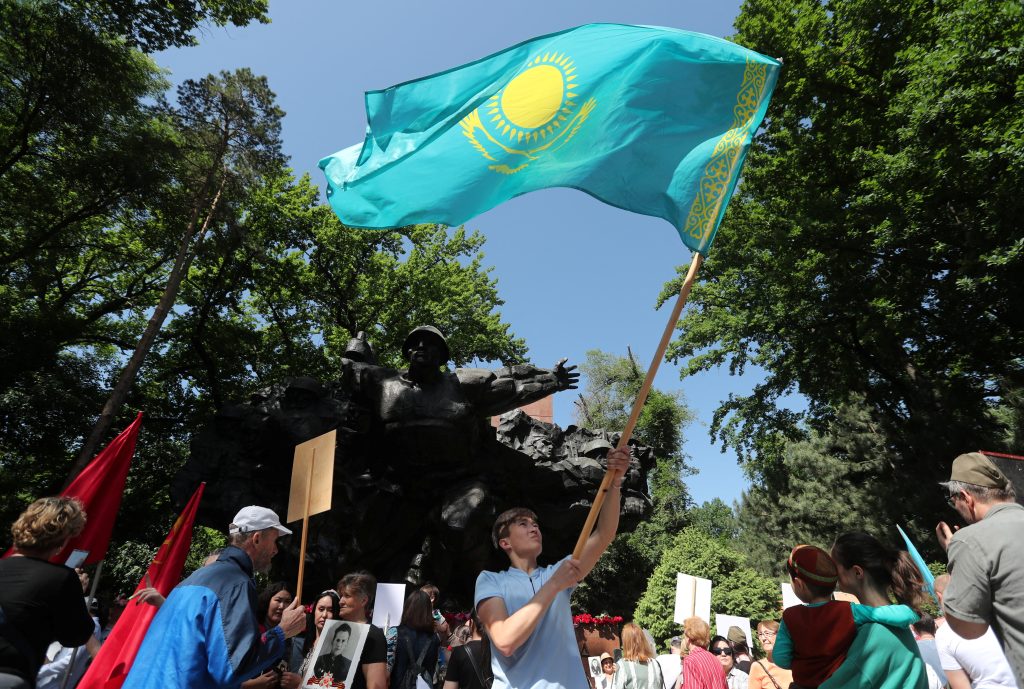 With Russia currently waging war in Ukraine, traditional Victory Day events on May 9 took on added symbolic significance. This holiday marking the Soviet victory over Nazi Germany has become central to modern Russia’s national identity, but attitudes elsewhere in the former USSR are often more nuanced and reflect the complex dynamics of post-imperial relations with Moscow. For Kazakhstan, refusal to join this year’s Victory Day celebrations was a subtle way of distancing the country from Russia’s aggressive actions.

Since the beginning of the war in Ukraine, the Kazakhstani authorities have made it clear that they do not condone Moscow’s military campaign. At the same time, Nur-Sultan has been cautious about expressing outright condemnation. In early March, a number of Central Asian nations including Kazakhstan abstained in a UN General Assembly resolution condemning the Russian invasion. Similarly, Kazakhstan did not vote for a US-sponsored resolution to suspend Russia from the UN Human Rights Council.

On the other hand, the first deputy chief of staff of the Kazakhstani presidency Timur Suleimenov stated during a recent event in Washington DC that the situation in Ukraine is a “war” and not a “special military operation” as the Kremlin insists. While this choice of words may not seem like a major development, it is quite meaningful that a senior Kazakhstani official used this particular term while in the US capital.

Kazakhstan has also sent humanitarian assistance to Ukraine. Aircraft with medical supplies were dispatched to Ukraine on at least three occasions throughout March. For example, one March 28 flight from Almaty to Katowice in Poland carried a total of 17.5 tons in aid for Ukraine including bedding and food products.

Crucially, Central Asia’s largest nation has not recognized the independence of the so-called separatist republics created by the Kremlin in eastern Ukraine. Kazakhstani citizens have also publicly voiced their displeasure over the invasion. The biggest anti-war protest to date among member nations of the Commonwealth of Independent States took place in Almaty on 6 March. Some five thousand individuals reportedly participated.

The most prominent single indication of Kazakhstan’s unease over the war in Ukraine was the recent decision to cancel the country’s annual Victory Day parade on May 9. The move to scrap this year’s parade was accompanied by bans on the display of military symbols and restrictions on the staging of WWII commemorations at schools.

The Kazakhstani Ministry of Defense officially stated that this was down to budgetary savings as well as “other issues.” However, given the enormous importance of the holiday to Russia and its status as a symbol of post-Soviet unity, this step was clearly meant as a message to Moscow.

It is important to note that Victory Day celebrations are not solely a legacy of the Soviet Union or a reflection of ongoing ties to contemporary Russia. The holiday is also a nationally important memorial day in its own right for Kazakhstan. It is estimated that over 600,000 Kazakhstani soldiers died during WWII while fighting for the Red Army. Some segments of Kazakhstani society were unhappy to see this year’s celebrations silenced, but it seems that geopolitical considerations were given priority.

Unsurprisingly, a number of prominent Russians voiced their displeasure at Kazakhstan’s decision and made some fairly aggressive statements in response to news of the cancelled Victory Day parade. For example, prominent Russian TV presenter Tigran Keosayan threatened the country with a “Ukrainian scenario.”

It would be easy to cherry-pick contradictory examples of how Nur-Sultan has behaved regarding the conflict in Ukraine. Certain decisions suggest that the Kazakhstani leadership supports Russia, while other statements and developments provide a different picture.

Rather than portraying inconsistency, recent developments demonstrate how Kazakhstan and other countries across the Caucasus and Central Asia must walk a fine line to avoid angering Moscow and prevent potential negative repercussions. After all, the threat of Russian military intervention has never been more apparent or immediate. Keosayan’s aforementioned diatribe demonstrates how high-profile Russians have no reservations when it comes to menacing neighboring countries including official allies of Russia such as Kazakhstan.

In light of the cautious path that Nur-Sultan must walk to avoid Moscow’s wrath, the recent cancellation of the Victory Day parade should be understood as a significant development. It was a modest but nonetheless meaningful protest against Russia’s use of military aggression within the former Soviet space.

Kazakhstan has plenty to be proud of regarding the role of its soldiers in WWII. However, Victory Day celebrations have become inextricably linked to modern Russian nationalism and the ongoing invasion of Ukraine. This makes Victory Day a problematic and controversial holiday for non-Russian former Soviet republics. Given the recent anti-war protests in Almaty and concerns for the security of their own country, many Kazakhstanis would likely have objected to a public holiday so closely tied to Vladimir Putin’s imperial ambitions.

While Washington and other Western capitals would welcome an increase in pro-Kyiv statements from Nur-Sultan, the importance of canceling this year’s annual Victory Day parade should not be underestimated. It was a geopolitically bold decision that reflects Kazakhstan’s refusal to blindly align itself with the Kremlin.

Making Putin pay: Russian assets currently frozen in the West could potentially be used to finance the rebuilding of post-war Ukraine but this will require both creativity and political will from Western leaders.

Image: People take part in the Immortal Regiment event on Victory Day, which marks the 77th anniversary of the victory over Nazi Germany, at a World War Two memorial in Almaty, Kazakhstan May 9, 2022. (REUTERS/Pavel Mikheyev)