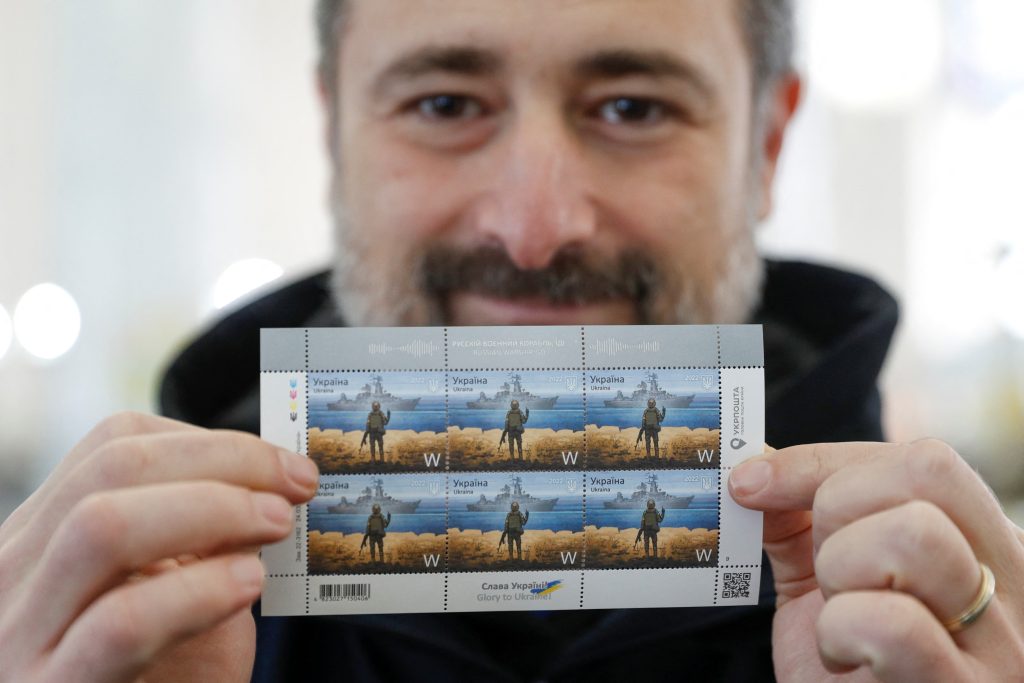 A new Ukrainian postage stamp commemorating an iconic act of resistance to Putin’s invasion has proved a huge hit with the public amid surging patriotic pride and growing confidence in Ukraine’s eventual victory over Russia.

The recently released stamp depicts a celebrated episode from the very first day of the war on February 24 that saw an isolated detachment of Ukrainian troops stationed on Snake Island in the Black Sea defy the might of the Russian navy. Despite being hopelessly outgunned by the approaching flagship of the Russian Black Sea Fleet, Ukrainian soldier Roman Hrybov rejected Russian demands to surrender while offering the epic response: “Russian Warship, Go F*ck Yourself.”

This memorable quote captured the mood of furious defiance then sweeping the nation and was immediately adopted as an unofficial slogan of the Ukrainian war effort. Many regarded the use of obscene language as particularly fitting and saw in it a direct echo of the legendarily profanity-laden seventeenth century reply of the Ukrainian Cossacks to a similar surrender demand from the Ottoman Sultan.

Within days, Hrybov’s industrial language was adorning billboards across the country and dominating social media. The incident also inspired Igor Smelyansky, the CEO of Ukrainian postal service Ukrposhta, to launch a national online competition for a commemorative stamp. This resulted in a winning design that can justifiably be called an instant classic, featuring a lone Ukrainian soldier directing an obscene gesture toward the Moskva, Russia’s Black Sea flagship.

With emotions running high in wartime Ukraine, interest in the planned stamp was already intense ahead of its official April 13 presentation. This excitement then escalated to entirely new levels one day after the launch when Ukrainian forces sank the Russian warship depicted on the stamp. The sinking of Putin’s flagship was a humiliating blow for Russia and a massive morale boost for Ukraine. It also guaranteed a prominent place in modern Ukrainian folklore for the country’s recently released commemorative stamp.

Demand for the new stamp surged following the sinking of the Moskva. Thousands of Ukrainians queued for hours at post offices across the country in order to get their hands on this little piece of history, with many expressing their pride in the country’s defiant stance and mounting military successes. The international media loved the story and provided enthusiastic coverage, with the stamp even making it onto the prestigious US late night talk show circuit.

Needless to say, not everyone was thrilled by this success. Efforts to make the stamp available for online purchase ran into difficulties when the site was hit by a massive cyber-attack. This presumably reflected simmering Russian anger at the fate of the Black Sea flagship and resentment over the obvious international admiration for Ukraine’s courageous resistance to Putin’s invasion.

The stamp’s one million print run is now almost entirely sold out. With Ukrposhta ruling out any further printing, the stamp has become something of a collector’s item and is being offered on sites such as eBay at vastly inflated prices. Meanwhile, a successor stamp is being prepared with a similar but updated design reflecting the fact that the Russian warship in question did in fact go exactly where instructed by the defenders of Snake Island.

Unsurprisingly, the original stamp design has now taken on a life of its own as a source of memes. It is just one of the many humorous and inspirational Ukrainian themes to flood online platforms since the outbreak of hostilities two months ago as Ukraine has comprehensively outmuscled Russia in the battle for social media dominance. Ukrainian President Volodymyr Zelenskyy has become something of a one-man meme generation industry, while few memes have proved as consistently popular as the endless footage of Ukrainian tractors towing away Russian tanks.

Russia’s invasion of Ukraine is no laughing matter, of course. The sheer scale of the war crimes currently being committed against the Ukrainian civilian population has stunned the global community and led to accusations of genocide from international leaders such as US President Joe Biden and his predecessor Donald Trump. With Russia suffering battlefield losses but still possessing overwhelming military strength, many observers fear the worst is yet to come.

This makes it all the more remarkable that Ukrainians have been able to maintain not only their humanity but also their sense of humor. The combination of raw courage and irreverent mockery that has characterized Ukraine’s response to Putin’s invasion has inspired the world and completely transformed outside perceptions of the country. Crucially, it has also helped convince more and more Ukrainians that they will ultimately emerge victorious. There is perhaps no more powerful symbol of this indomitable spirit than the tale of a Russian warship that attempted to intimidate Ukraine into submission but ended up on the front of a bestselling Ukrainian stamp and at the bottom of the Black Sea.