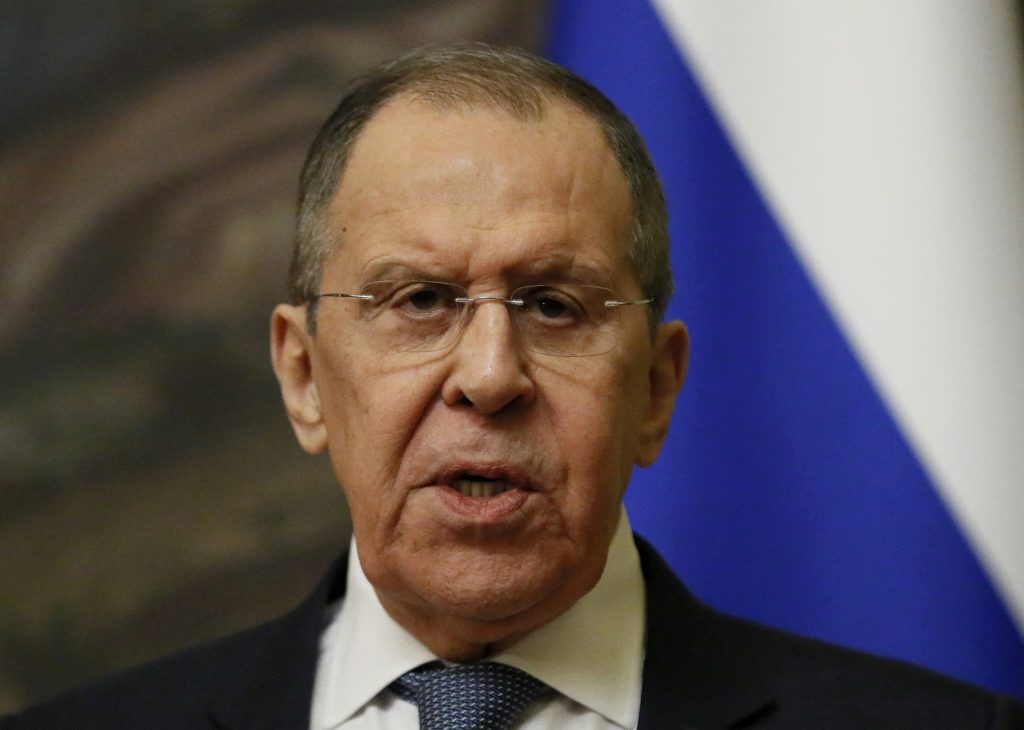 Lavrov’s diatribe came during a May 1 interview with Italian TV show Zona Bianca as he attempted to defend Russia’s insistent portrayal of Ukraine as a “Nazi” state despite the fact that Ukrainian President Volodymyr Zelenskyy is himself Jewish.

“So what if Zelenskyy is Jewish? The fact does negate the Nazi elements in Ukraine,” Russia’s top diplomat stated. In an apparent bid to bolster his argument, Lavrov claimed that “Hitler also had Jewish blood” before declaring “the most ardent anti-Semites are usually Jews.”

Lavrov’s shocking comments provoked a wave of international anger, with Israel leading the chorus of condemnation. Israeli Foreign Minister Yair Lapid said Lavrov’s “unforgivable and outrageous” statements represented “the lowest form of racism against Jews.” Fellow Israeli government minister Yair Golan stated that Lavrov’s claims “reflect what the Russian government really is: a violent government that doesn’t hesitate to wipe out its rivals at home, invade a foreign country, and falsely accuse it of renewing Nazism.”

Ukrainian officials were also quick to denounce Lavrov. Ukrainian Foreign Minister Dmytro Kuleba noted that his Russian counterpart’s “heinous remarks” were offensive to President Zelenskyy, Ukraine, Israel, and the Jewish people, while demonstrating that “today’s Russia is full of hatred towards other nations.”

The Russian Foreign Minister’s very public descent into the squalid depths of anti-Semitic conspiracy theories highlights the mounting difficulties facing the Putin regime as it attempts to justify the war in Ukraine.

Officially, Russian President Vladimir Putin has stated that the aim of his “special military operation” in Ukraine is to “de-Nazify” the country. However, neither Putin nor any of his colleagues have been able explain exactly why they regard Ukraine as “Nazified.” Instead, they have relied largely on outside ignorance of contemporary Ukraine along with Soviet-era propaganda tropes equating any expressions of Ukrainian national identity with fascism.

In reality, independent Ukraine has established itself over the past three decades as an imperfect but vibrant democracy with a pluralistic political culture that is light years away from modern Russia’s own authoritarian model. Since 1991, the post-Soviet generation of Ukrainians have grown used to a highly competitive and often unruly democratic climate which bears no resemblance whatsoever to the fascist tyranny of Kremlin fairytales.

Russian propagandists and their Western allies routinely exaggerate the degree of far-right influence in today’s Ukraine, but in fact nationalist parties have made little impression on the country’s mainstream politics and remain far more marginalized than elsewhere in Europe. It is instructive to note that while the openly far-right Marine Le Pen received more than 41% of the vote in France’s recent presidential ballot, a coalition of Ukraine’s leading far-right parties managed to secure just 2.15% in the country’s 2019 parliamentary election.

It is now clear to all but the most credulous and partisan of observers that Russian tales of Ukrainian fascism are mere window dressing for Moscow’s war of imperial aggression. This was explicitly acknowledged in a recent article published by Russian state news agency RIA Novosti which provided a step-by-step guide to the destruction of the Ukrainian state while explaining that “de-Nazification” actually means “de-Ukrainization.” Such twisted logic is entirely in line with Putin’s many public statements denying Ukraine’s right to exist and branding the country an “anti-Russia” that lacks historical legitimacy and can no longer be tolerated.

The extent of Putin’s imperial ambitions is becoming increasingly apparent in the regions of Ukraine currently under Russian occupation. In addition to the mass murder of civilians in hotspots like Mariupol, thousands of Ukrainian community leaders have been abducted in Stalinist-style round-ups and over one million Ukrainians have been forcibly deported to Russia.

Meanwhile, occupation authorities are systematically removing all symbols of Ukrainian statehood, introducing the Russian currency and Russian school curriculum, forcing the Ukrainian media off the air, and even returning toppled Lenin monuments to town squares. Far from seeking to extinguish political extremism in Ukraine, Russia is intent on eradicating Ukraine itself.

The sheer scale of Russian war crimes in Ukraine has already prompted political leaders including US President Joe Biden and his predecessor Donald Trump to accuse Putin of genocide. As the true eliminationist nature of Russia’s war becomes impossible to ignore, others are also shedding their earlier inhibitions and finally agreeing to provide Ukrainians with the heavy weapons the country so desperately needs in order to defend itself.

This is welcome but long overdue. Thousands of lives could have been saved if the international community had recognized Putin’s genocidal intentions in the lead-up to the war and armed Ukraine accordingly. With senior Kremlin figures like Lavrov now openly embracing Nazi-style anti-Semitism, there is no longer any excuse for underestimating the totalitarian menace behind Russia’s cynical “anti-fascist” posturing.