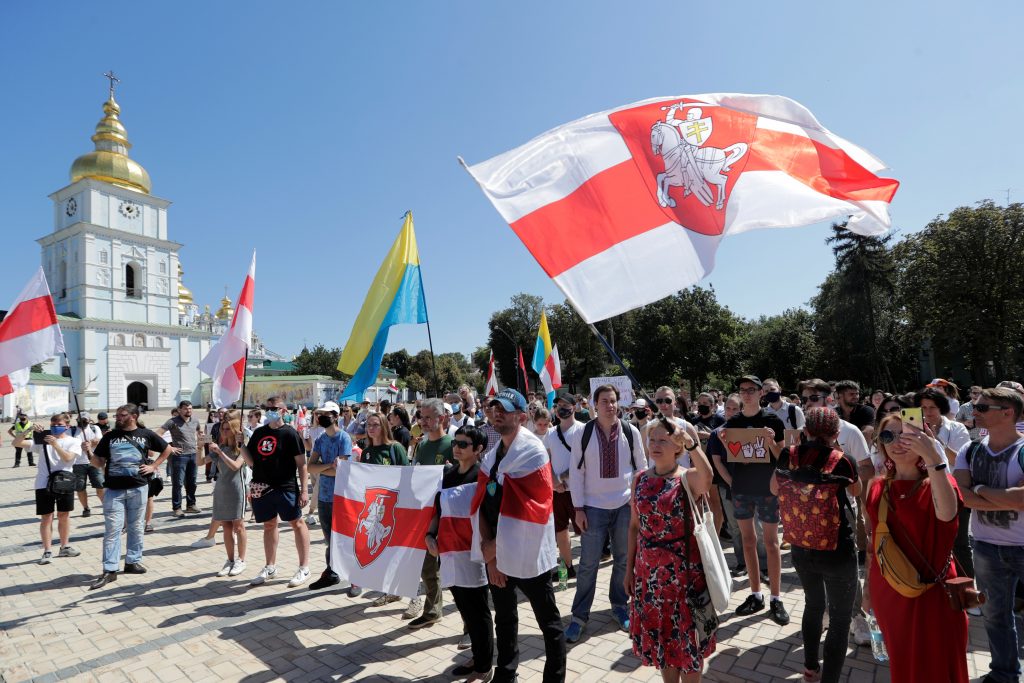 A national democratic awakening is currently threatening to unseat Belarusian dictator Alyaksandr Lukashenka after 26 years in office. As he struggles to cling onto power, Lukashenka is increasingly resorting to the kind of language first deployed by the Kremlin to discredit the 2014 pro-democracy uprising in nearby Ukraine. According to Lukashenka, many of the Belarusians currently protesting for democracy are “Nazis”; the protests themselves are a foreign plot; and the entire affair will only result in poverty, national ruin, and rampant Russophobia.

Another of Lukashenka’s favorite themes has been to predict that the protest movement will transform Belarus into another Ukraine. Speaking to an audience of regime loyalists in Minsk on August 16, he invoked Ukraine’s recent history in order to emphasize the gravity of the situation. “This will be the beginning of your end,” he declared. “You will go down on your knees like in Ukraine.” This chimes closely with Kremlin media depictions of Ukraine, which for the past six years have sought to portray the country as a failed state. Indeed, Vladimir Putin himself famously asked Russians in 2017, “Do you really want to be like Ukraine?”

Dictators like Putin and Lukashenka have little choice but to demonize democracy, and nearby Ukraine’s imperfect progress since 2014 makes it a seemingly convenient target. However, the bulk of Ukraine’s current woes are not due to the country’s attempts to embrace democratic values. They are a direct result of the war unleashed by Russia. Indeed, it is entirely reasonable to conclude that this ongoing military intervention was conceived six years ago specifically to discredit Ukraine’s democratic transition and deter other post-Soviet nations from following suit.

The “just look at Ukraine” argument against democratization has obviously made an impression on Lukashenka, who appears convinced it will prove equally compelling to Belarusian audiences. But are these authoritarian attempts to use Ukraine as a cautionary tale reasonable?

Any assessment of the Ukrainian experience over the past six post-revolutionary years must begin with an acknowledgment that Belarus is not Ukraine. Despite the many striking similarities between the events currently taking place in Belarus and Ukraine’s two post-Soviet people power uprisings of 2004 and 2014, today’s Belarusian pro-democracy movement remains unique.

There are also important differences between the two countries. While Russia invested heavily in the cultivation of pro-Kremlin Ukrainian political forces throughout the 1990s and 2000s, there are no comparable groupings in Belarus beyond Lukashenka himself, who has often proved a mercurial ally.

Similarly, there are no distinctly pro-Kremlin regions of Belarus comparable to Crimea and the Donbas in Ukraine. Meanwhile, the dictatorship that emerged in Belarus over 26 years of Lukashenka’s rule has relatively little in common with the chaotic but nonetheless pluralistic political culture of independent Ukraine.

Nevertheless, the Soviet inheritance shared by both countries, together with the looming presence of Russia and a common location on one of the world’s great geopolitical fault lines, makes Ukraine’s post-2014 progress particularly relevant to Belarus.

Perhaps the most important thing to note is that today’s Ukraine is a vibrant democracy. Unlike Belarus or Russia, Ukrainian opposition candidates do not live in fear of being killed or incarcerated. Political competition is open. Votes are free, results are credible, and electoral outcomes are respected. The peaceful transfer of power is now a well-established Ukrainian political tradition, while the victory of political newcomer Volodymyr Zelenskyy in Ukraine’s 2019 presidential election was arguably the single most remarkable demonstration of democracy in the entire post-Soviet region during the past three decades.

In contrast, the utter failure of the Belarusian authorities to create similar conditions has been the catalyst behind the uprising currently taking place in the country. For Russia, fear of a democratic political culture is one of the driving forces behind both foreign and domestic policy. You have to wonder why Lukashenka and Putin are so afraid of letting the people speak. Ukraine has no such fears.

Alongside a consolidated democracy, another Ukrainian gain since 2014 that might be appealing to Belarusians is the far greater transparency in public life. No doubt the citizens of Belarus (and Russia) would like to have their politicians and others in positions of authority required to make annual transparent online declarations of their wealth and assets. That has been law in Ukraine since 2016.

This transparency is also evident in the traditionally murky world of government procurement. Throughout the post-Soviet world, government contracts are a central part of the client system that holds corrupt authoritarian regimes together. In Russia, budget funds funneled to loyalist figures are then used to finance the Kremlin’s information warfare and shadow army of non-state mercenary troops. Ukraine has made significant strides away from this model in recent years with the introduction of the ProZorro electronic procurement system and a range of other open data innovations. Belarus would benefit from following Ukraine’s lead in this way, while the world would benefit if Russia also did so.

Economically, the past six years have been a turbulent and challenging time for Ukraine, but prior to the coronavirus outbreak, the country appeared to have turned the corner and was beginning to look like an economic success story. Key indicators included four consecutive years of GDP growth, while in 2019 the Ukrainian hryvnia was the world’s best-performing currency against the US dollar.

This post-revolutionary recovery is particularly relevant given the relative stagnation of the Belarusian economy and its heavy reliance on Russia. Since 2014, Ukrainian businesses have been able to compensate for the sharp decline in economic ties with Russia by entering new markets and taking advantage of the free trade component of the country’s landmark EU Association Agreement. As they look towards a democratic future where they will perhaps have to make do without the Russian subsidies that did so much to keep the economy of the Lukashenka dictatorship afloat, Belarusians could learn much from Ukraine’s own experience of economic expansion beyond the narrow confines of the Kremlin-dominated post-Soviet comfort zone.

In addition to free trade, Ukraine’s European integration has also led to the introduction of visa-free EU travel. Since June 2017, Ukrainians have enjoyed short-term freedom of movement throughout the European Union’s Schengen Area, leading to a significant broadening of horizons and a dramatic shift in Ukrainian attitudes towards their place within the wider European family of nations. It is likely that such a breakthrough would have a similarly positive impact on Belarusian society.

One of Ukraine’s least tangible but arguably most important gains since 2014 has been the dramatic strengthening of national identity. After decades in the post-Soviet shadows, Ukrainians have emerged over the past six years as noticeably more self-confident and patriotic. This is evident everywhere from the high levels of public support for the military, to the post-2014 boom in the country’s creative industries. There are early signs that Belarus’s current democratic awakening will produce similar results, with protesters adopting the red-and-white alternative national flag that dates back to the statehood bid of the early twentieth century. Ukraine’s recent experience strongly suggests that democracy can help post-Soviet societies to strengthen national cohesion.

Ukraine has clearly not got everything right since the country’s 2014 Revolution of Dignity. Key shortcomings include ongoing institutional corruption, undue oligarch influence, and the failure to establish genuine rule of law. However, the progress made over the past six years is far too significant to dismiss the country as a warning of the dangers awaiting anyone rash enough to reject the dubious charms of post-Soviet authoritarian stability.

Ukraine’s biggest problems since 2014 all flow from the war being waged against the country by Russia. The conflict has resulted in over 14,000 deaths and forced millions to flee their homes. It has had a disastrous economic impact and traumatized Ukrainian society as a whole. These are the dire consequences that both Putin and Lukashenka are alluding to when they attempt to scare audiences with references to Ukraine. However, they would prefer to pretend that the blames lies with pro-democracy protesters rather than Russian aggression.

By branding Ukraine as a cautionary tale, Lukashenka is not merely overlooking the Ukrainian gains of the past six years; he is also indirectly threatening Belarusians with Russian military intervention. This risks turning today’s pro-democracy awakening into an anti-Russian struggle for national independence. That may suit the increasingly desperate Lukashenka, but it is hard to see how it is in either Belarus’s or Russia’s long-term interests.