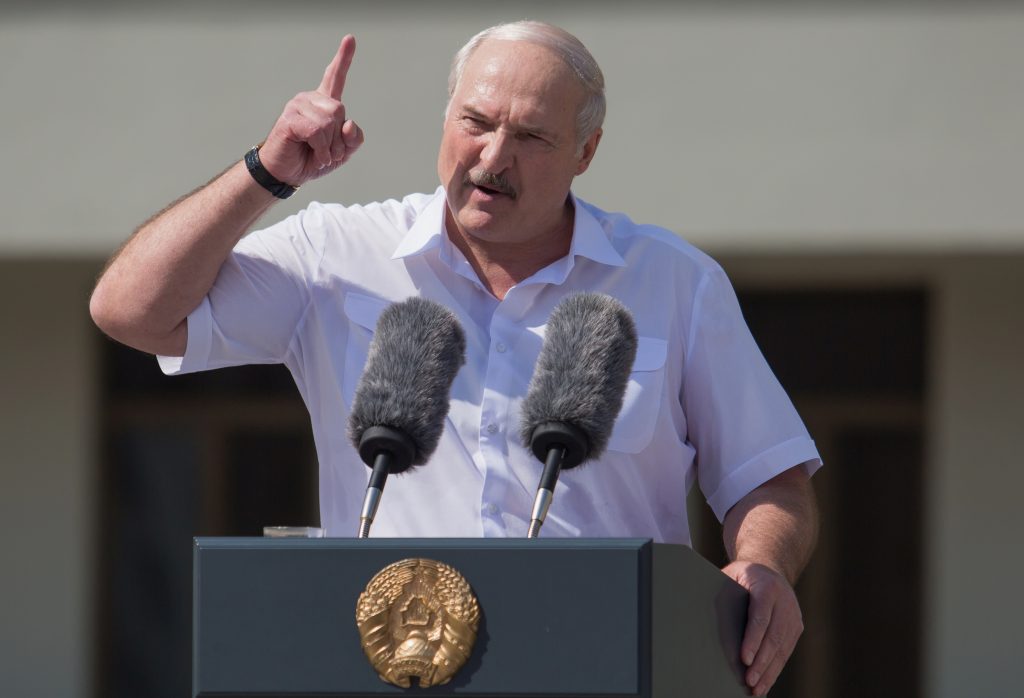 While the drama of Belarus’s unexpected revolution has been unfolding, significant collateral damage has been done to official relations between Minsk and Kyiv. These deteriorating bilateral ties place in question the acceptability of Minsk as the venue for peace negotiations aiming to bring the six-year undeclared Russo-Ukrainian War to an end.

Meanwhile, with beleaguered Belarusian leader Alyaksandr Lukashenka now openly appealing to Putin for help, many in Ukraine fear they may soon face the ominous prospect of a large Russian army presence along the country’s lightly defended northern border.

Bilateral tensions between Ukraine and Belarus have been increasingly evident in recent days. On August 16, the Office of the Ukrainian President issued a strongly worded statement accusing Lukashenka of “deliberately increasing tensions” between Kyiv and Minsk and “conscious provocative behavior.”

One day later, Ukraine took the highly unusual step of recalling its ambassador to Belarus for consultations. Echoing his president, the Ukrainian Minister of Foreign Affairs Dmytro Kuleba said he considers that the recent behavior of the “Minsk authorities” has undermined trust between the two countries and “dealt a heavy blow to our bilateral relations.”

This was all a long way from the more measured tone of bilateral dialogue just weeks ago. As a political newcomer who won the Ukrainian presidency last year in a notably free and fair election, President Zelenskyy could be expected to sympathize with fellow first time candidate Svyatlana Tsikhanouskaya, Lukashenka’s opponent in the deeply flawed August 9 presidential vote that sparked the unprecedented protests currently sweeping Belarus. However, prior to the recent post-election period, Zelenskyy had been relatively diplomatic in his comments about the deteriorating situation in Belarus. Even as Lukashenka jailed potential election rivals in the months leading up to the vote, Zelenskyy seemed ready to act tactfully in the name of preserving good neighborly relations.

Zelenskyy and Lukashenka certainly made for an odd couple. One was a conservative dictator who had kept a firm grip on power for over a quarter of a century, while the other was a political neophyte representing himself as a force for change. Whatever they may have privately thought of each another, these two very different presidents managed to establish a cordial working relationship.

Last October, the wily Lukashenko visited Ukraine and had a friendly meeting with Zelenskyy at the Second Forum of the Regions of Ukraine and Belarus in Zhytomyr. At the time, Zelenskyy commented favorably on their relationship. “We understand each other,” he said. “I think our two nations are friendly, mentally close. I am proud, and I am confident that every Ukrainian is also proud that we have such good neighbors.”

As the Belarusian presidential election drew closer and it became apparent that Lukashenka faced a serious challenge to his 26-year reign, Ukraine found itself becoming entangled. The game changer was the strange case of the Russian mercenaries detained near Minsk on July 29. Lukashenka claimed his security service had identified and arrested 32 members of Russia’s notorious “Wagner” mercenary army at a location outside the Belarusian capital. He insinuated Moscow had sent them to stir up trouble during the election period and claimed credit for saving Belarus from a planned Russian intervention.

Crucially, some of the detained Russians were reportedly veterans of Putin’s war in eastern Ukraine. Lukashenka implied that Ukraine was welcome to seek their extradition. On August 5, the Ukrainian and Belarusian presidents held a telephone conversation during which they explored the potential extradition. Zelenskyy seems to have been reassured that Lukashenka would indeed hand over those suspected of committing war crimes in Ukraine.

The focus of discussions changed dramatically in the immediate aftermath of the August 9 vote as anti-regime protests across Belarus were met by a brutal crackdown. Instead of congratulating Lukashenka on his election “win”, Zelenskyy called on the Belarusian authorities to refrain from using violence against protesters and to seek dialogue with the country’s opposition. He subsequently aligned himself with the highly critical positions expressed by Poland, Lithuania, and the EU.

Tensions increased further when it became clear that Lukashenka had returned the Russian mercenaries to Moscow instead of handing them over to Kyiv. On August 15, Zelenskyy condemned the decision as “strange, improper and definitely unacceptable in friendly inter-state relations.” The President’s Office added: “We consider such a decision, to put it mildly, unfair. It does not correspond to the spirit of relations between Ukraine and Belarus, based on the principles of respect and mutual assistance.”

Lukashenka was not finished. At a hastily organized August 16 pro-regime rally in Minsk, the increasingly isolated but publicly defiant dictator accused Ukraine of working with other Western states to conspire against Belarus. This attack sparked further indignation in Kyiv.

As the diplomatic war of words escalates, there are fears that the deteriorating situation in Belarus could have grave consequences for Ukrainian security. For years prior to the current crisis, Lukashenka rejected Moscow’s attempts to establish Russian army bases in Belarus. However, the desperate dictator is now rapidly running out of options. Lukashenka has in recent days openly appealed for Russian help and portrayed Belarus’s pro-democracy protest movement as a direct threat to Putin’s own regime.

This is forcing Kyiv to urgently address the possibility of a Russian military presence in Belarus. A Russian intervention would potentially allow the Kremlin to menace Ukraine along the 1,000 kilometer Ukrainian-Belarusian border. Zelenskyy reportedly met with his security advisers on Monday to address the issue.

Events are moving at a remarkable pace in Belarus and Ukraine is inevitably becoming caught up in the geopolitical turbulence. Over the past week, relations between official Kyiv and Minsk have in effect been ruptured. Kyiv has aligned itself with its Western partners and sided with the democratic opposition in Belarus. Meanwhile, Lukashenka has condemned Ukraine and turned to Russia for salvation.

In such circumstances, Minsk can hardly be regarded as a suitably neutral venue for ongoing efforts to end the war in eastern Ukraine. If Lukashenka somehow manages to remain in power, the Minsk peace process will clearly need to look for a new home.

The prospect of a Russian military presence in Belarus is a far more immediate concern for Kyiv. If Putin decides to intervene on Lukashenka’s behalf, Russia will be in a position to significantly increase the encirclement of Ukraine. While the Belarusian dictator sits on a throne of Russian bayonets, Putin will be able to deploy his forces tantalizingly close to the Ukrainian capital itself.

Why Vladimir Putin is unlikely to invade Belarus

Belarus is experiencing an historic democratic awakening that looks set to oust Kremlin-friendly dictator Alyaksandr Lukashenka – but Putin is highly unlikely to repeat his 2014 invasion of Ukraine.