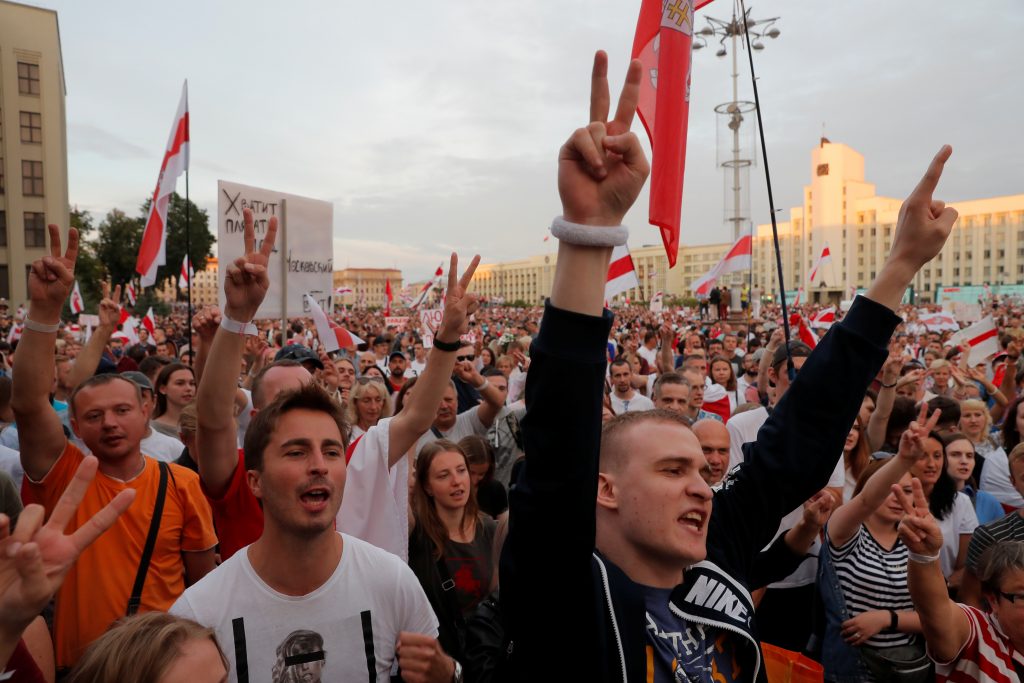 Despite the historic events of recent days, the current situation in Belarus is remarkably peaceful. However, this might prove to be the calm before the storm. The country remains locked in a major crisis and urgently needs credible outside mediation in order to prevent a potentially deadly deterioration from taking place. The natural mediator would be a senior European diplomat under some international cover.

Right now, the Belarusian population seems amazingly united. They have wisely formulated only three demands: Alyaksandr Lukashenka must go since he stole the presidential elections on August 9; new free and fair elections must be held; and all political prisoners must be released.

As mass rallies and protest actions continue across the country, the pro-democracy movement is evolving. Opposition figurehead Svyatlana Tsikhanouskaya, who in all probability won the presidential vote on August 9, has formed a Coordination Council. This Council contains many of the country’s most prominent opposition and independent personalities.

President Lukashenka has united the Belarusian people against him. He has lost all legitimacy. One of the key aims of international mediation should be to make it possible for him to leave Belarus peacefully with some degree of immunity. The top priority is to avoid further bloodshed.

The critical outside player in any push for international mediation will be Russia.

Last week, Lukashenka made three phone calls to Russian President Vladimir Putin. During the first two calls, Putin was somewhat guarded and merely emphasized “extensive integration within the Eurasian Economic Union and the CIS, and military and political links within the Collective Security Treaty Organization.”

In the last phone call on August 16, Putin sharpened his tone and underlined Russia’s “readiness to render the necessary assistance to resolve the challenges facing Belarus based on the principles of the Treaty on the Creation of a Union State … if necessary.”

How serious is the threat of a Russian intervention?

So far, no slogans against Putin or Russia have been apparent during protests. Belarusian protesters have abandoned Lukashenka’s Soviet-style flag and adopted the old flag of independent Belarus, implying that the protest movement identifies broadly with Belarusian independence. However, it is difficult to see how the Kremlin would benefit from turning the Belarusians against Russia. If Putin opts to intervene in the current crisis, the mood in Belarus could rapidly become anti-Russian.

For the Kremlin, recent foreign policy experiences in the former Soviet space offer two alternative models: Ukraine in 2014 and Armenia in 2018. In Ukraine, the Kremlin turned the majority of the population against Russia and got bogged down in expensive warfare in eastern Ukraine. In Armenia, Moscow accepted the outcome of a democratic election, while Prime Minister Nikol Pashinyan assured Moscow that Armenia would remain a member of the Eurasian Economic Union, the CIS, and the CSTO. The Armenian approach should be the preferred solution for all in Belarus as well.

In revolutionary situations like today’s Belarus, speed is vital. Failure to act fast can easily lead to violence. No national opposition stays united for long. When it splits, some will become radical and will inevitably turn against Russia. The more time that passes without a solution to the present crisis, the more likely a serious outburst of violence becomes. With this in mind, the Kremlin should be interested in an early settlement.

The key question now is who can mediate?

The experience of Ukraine and the 2004 Orange Revolution serves as possibly the ideal mediation model. Europe was represented by the European Union’s Javier Solana and Poland’s President Alexander Kwasniewski, while Russia was represented by the Speaker of the State Duma Boris Gryzlov and former Prime Minister Viktor Chernomyrdin, who was then ambassador to Kyiv. All these people were outstanding diplomats who knew Ukraine and its top politicians well. They represented Europe and Russia at the highest level. They met early and achieved a solution.

By contrast, European mediation attempts in Ukraine in February 2014 represent a major failure. On that occasion, the mediators arrived far too late. Furthermore, Russia was not involved at a high level and the whole undertaking was rushed through with too little mandate.

Today’s Belarus is in desperate need of effective international mediation. The top mediator needs to be a senior politician who knows Belarus well, but who has not antagonized Lukashenka too much in the past. Given that the European Union sanctioned Belarus until 2016 and the United States still does so, possible candidates for the chief mediator role are relatively few in number.

The European countries with the greatest expertise on Belarus are Lithuania and Poland, but they have also been among the most critical of Lukashenka, rendering their politicians less suitable as mediators. None of the relevant personalities in Brussels appear to have significant knowledge of Belarus.

The Latvian Minister for Foreign Affairs, Edgars Rinkēvičs, is one obvious candidate. He is among the most experienced European foreign ministers, having held this post since 2011. He has probably been the most frequent ministerial visitor to Minsk, and his Russian is perfectly fluent.

Usually, an international organization is desirable as an umbrella. The European Union is not much appreciated by Moscow or Lukashenka, so the Organization for Security and Cooperation in Europe (OSCE) might be a better choice on this occasion. Both Russia and Belarus are fully fledged members. If a broader group of foreign ministers would be desirable, the three neutrals – Sweden, Austria, and Finland – would surely be happy to assist.

Whoever takes on the role of mediator, it is vital this process gets underway without delay. Belarus is currently at a historical crossroads. Early, able, and effective mediation is now essential to make sure the country’s next steps are in the right direction.