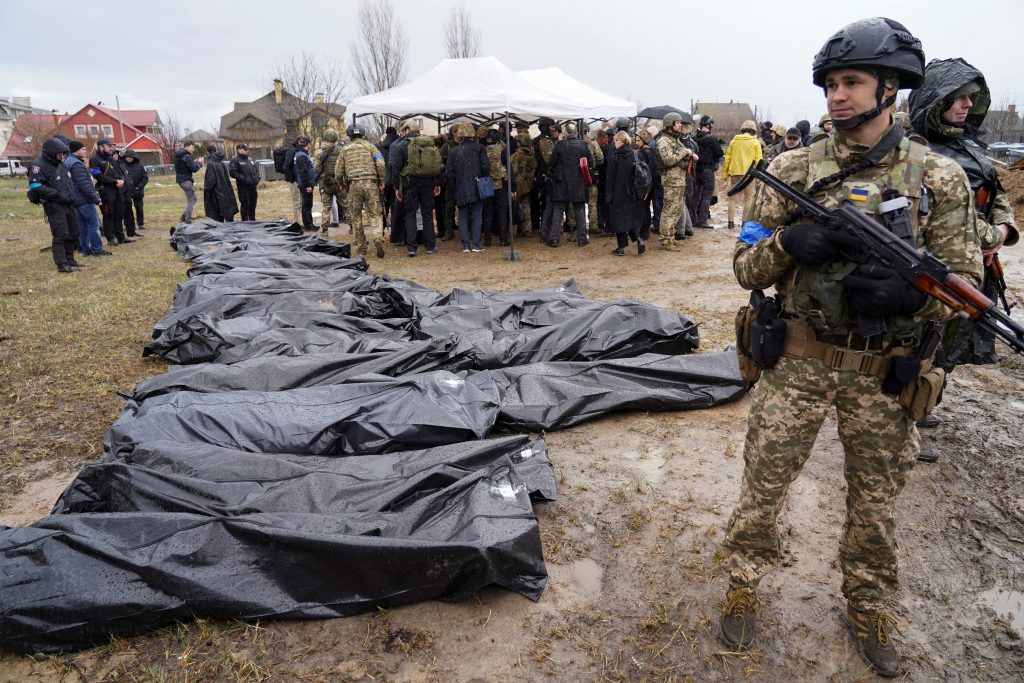 As further details of Putin’s Ukraine genocide continue to emerge, some world leaders remain in denial over the sheer scale of Russian atrocities and the chilling nature of Moscow’s ultimate war aims. In an April 13 interview with public broadcaster France 2, French President Emmanuel Macron refused to describe the mass killing of Ukrainians by Russian troops as genocide. “I would be careful with such terms today because these two peoples [Russians and Ukrainians] are brothers,” Macron commented.

The French leader’s statement is doubly troubling. It ignores the obvious genocidal intent behind Russian war crimes in Ukraine, while at the same time serving as a reminder that European perceptions of Ukraine are still often dangerously distorted by the lingering effects of Russian propaganda. Despite eight years of Kremlin aggression against the country, it seems that some European leaders continue to view Ukraine through a Moscow prism.

The idea of Russians and Ukrainians as “brotherly nations” is an old Kremlin propaganda trope that has long been used to justify Russian domination over Ukraine. Much like Vladimir Putin’s oft-repeated claim that Russians and Ukrainians are “one people,” the brotherhood narrative does not imply a partnership of equals. On the contrary, it is implicitly understood to mean that Ukrainians are part of a larger Russian world and should know their place.

When seen from this unapologetically imperialistic perspective, any Ukrainian attempts to assert an independent identity are viewed as acts of direct hostility toward Russia. In other words, talk of Russian-Ukrainian unity is code for the subjugation of Ukraine and has served as the ideological basis for centuries of oppression.

Given the amount of time he has recently spent speaking on the phone with Vladimir Putin, it is perhaps unsurprising to see Macron parroting Russian disinformation about Ukraine. Nevertheless, he really ought to know better. As long ago as the early eighteenth century, Macron’s illustrious compatriot Voltaire was sufficiently aware of the Ukrainian independence struggle to write, “Ukraine has always aspired to be free.”

Over the intervening three hundred years, Russia has consistently sought to russify Ukraine and erase the basis for a separate Ukrainian identity. The Ukrainian language has traditionally been one of the main focuses of these efforts, with dozens of separate bans and Czarist decrees aimed at eradicating Ukrainian from public life. Russia’s determination to deny Ukraine national status was perhaps most concisely expressed in the Valuev Circular, a secret 1863 imperial decree which declared: “A separate Ukrainian (“Little Russian”) language has never existed, does not exist, and cannot exist.”

Russian efforts to crush Ukraine’s statehood aspirations escalated dramatically in the first half of the twentieth century. The fledgling Ukrainian republic which was established in the aftermath of the Russian Revolution was eventually defeated and absorbed by the Bolsheviks, but memories of this short-lived independence survived and served as a direct challenge to Soviet rule.

A decade later, Stalin moved to decisively end Ukrainian dreams of establishing their own independent state. In the early 1930s, the Soviet dictator turned Ukraine into a giant concentration camp and engineered an artificial famine throughout the country’s agrarian heartlands, leading to the death by starvation of at least four million Ukrainians. Raphael Lemkin, the man who coined the term “genocide,” saw the forced famine as part of a systematic Stalinist campaign aimed at the destruction of the Ukrainian nation, which he described as “the classic example of Soviet genocide.”

Russia’s centuries-long campaign against Ukrainian statehood and national identity provides crucial context for anyone seeking to understand Putin’s goals in the current war. Indeed, the Russian ruler’s decision to gamble everything on such a high-risk military undertaking only begins to make sense when viewed from the perspective of his Czarist worldview and revisionist imperial ambitions.

Identifying Putin’s intentions is essential in order to determine whether his actions constitute genocide, which is defined by the UN as “a crime committed with the intent to destroy a national, ethnic, racial or religious group, in whole or in part.” Fortunately, Putin himself has provided ample evidence of his genocidal intent toward Ukraine. For many years, he has publicly denied the existence of a separate Ukrainian nation and argued that Ukraine’s long struggle for statehood was in fact a foreign plot designed to undermine Russia.

In a notorious July 2021 essay on the alleged historical unity of Russians and Ukrainians, Putin claimed all Ukrainians were in reality Russians and accused modern Ukraine of occupying historically Russian lands. During a series of unhinged addresses at the start of the war in February, he went even further. Ukraine, Putin stated, was an illegitimate “anti-Russia” run by “neo-Nazis and drug addicts” that could no longer be tolerated. Instead, it must be “de-Nazified.”

The full genocidal meaning of Putin’s words was made explicit in an article published by Russian state press agency RIA Novosti on April 3 which explained that “de-Nazification” actually meant “de-Ukrainianization.” The article went on to claim that the establishment of an independent Ukrainian state in 1991 was the “Nazification” of Ukraine before declaring that anyone who self-identified as a Ukrainian was a “Nazi.” In this depraved vision of a future Ukraine without Ukrainians, the country could no longer be sovereign, nor could it be known as Ukraine.

The genocidal vision outlined by Putin and his propagandists is now being implemented by the Russian military in Ukraine. In the first seven weeks of the conflict, thousands of Ukrainians have already been murdered in a systematic fashion which recalls the darkest chapters of the totalitarian twentieth century.

Sexual violence has also been used as a tool of genocide, with victims reporting that their Russian abusers boasted of traumatizing them deliberately in order to prevent them from giving birth in the future to Ukrainian babies. Meanwhile, tens of thousands of Ukrainians have been forcibly deported to Russia with Ukrainian children adopted by Russian families. All of these crimes qualify as acts of genocide.

Thankfully, international awareness of Putin’s Ukraine genocide is increasing. Macron’s regrettable remarks came immediately after US President Joe Biden had directly accused Putin of being a “dictator” who “commits genocide.” The US leader later doubled down on his comments, stating, “It’s become clearer and clearer that Putin is just trying to wipe out even the idea of being Ukrainian.”

Such clarity is certainly welcome but also long overdue. Putin’s genocidal intentions in Ukraine were on public display long before the outbreak of the current war and are firmly rooted in Russia’s imperial past. He is merely the latest in a long line of Russian rulers who have denied Ukraine’s right to exist and is now taking this criminal thinking to its logical conclusion.

European leaders like Emmanuel Macron must wake up to the enormity of the crimes taking place on the continent’s eastern frontier before it is too late. Time is running out to save a European nation of more than 40 million souls, and history will not be kind to those who fail to act despite ample evidence of Russia’s apocalyptic plans.

Perseverance can bring Russian war criminals including Putin to justice

Patience and perseverance are vital as efforts get underway to bring Vladimir Putin and members of the Russian military to justice for crimes against humanity committed during the war in Ukraine.

Image: Ukrainian servicemen stand guard next to bodies that were exhumed from a mass grave in Bucha. April 8, 2022. (REUTERS/Janis Laizans)