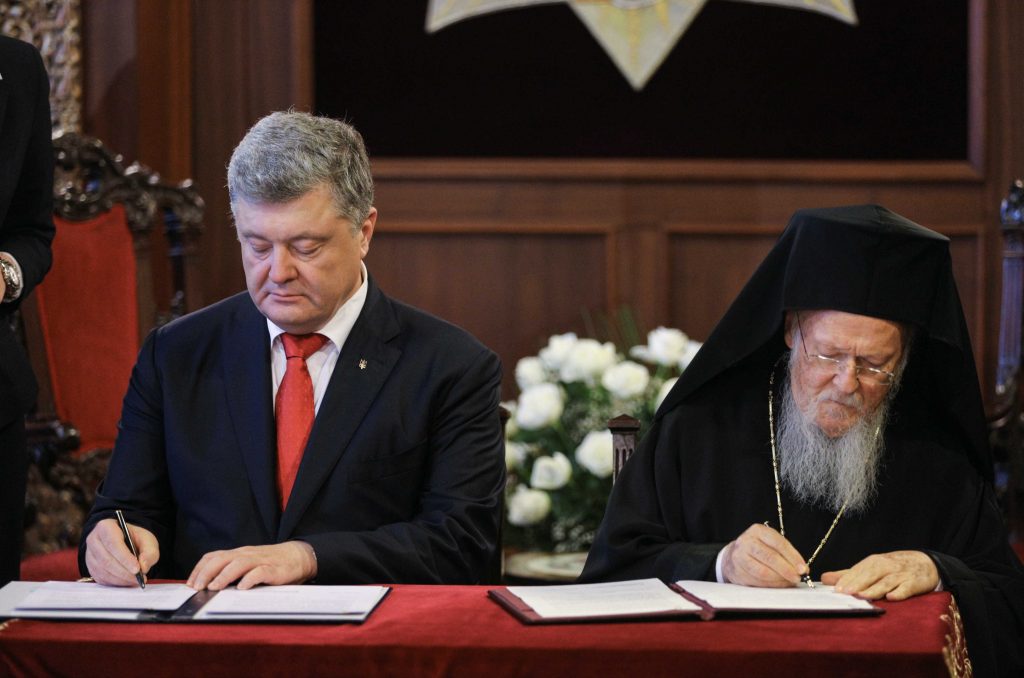 Having gotten used to enjoying influence over the hearts and minds of some believers in Ukraine, the Russian Orthodox Church (ROC) through its puppet body, the Ukrainian Orthodox Church of Moscow Patriarchate (UOC MP), has naturally resisted the process of Ukraine breaking free of Russia’s “religious” claws.

Russia and its church, with a dark shadow of the KGB-turned-FSB looming over it, has and will continue to employ all of its dirty influence tricks abroad, ranging from disinformation and manipulation of public opinion to pure blackmail, when needed. The Russian church went as far as accusing Ecumenical Patriarch Bartholomew I of being “financially motivated” by Ukrainian authorities for pushing through the autocephaly agenda.

However, the very emergence of Moscow’s Patriarchate in Ukraine, which dates back to 1686, was the result of Russia annexing the Kyiv diocese, the territory under control of the Ecumenical Patriarchate of Constantinople. Under the direct ruling of top Russian authorities, the Russian Orthodox Church established deep roots in Ukraine’s religious environment but its spiritual independence and return to its canonical status remained inevitable. After all, many newly-independent countries, including those from the former Soviet camp, have been granted a right to their own autocephalous church. And it was the Ecumenical Patriarchate who greenlighted such developments regardless of Moscow’s reaction.

Constantinople’s relations with churches worldwide has long been an irritant for the Russian Orthodox Church which in the 1990s had warned the Ecumenical Patriarchate not to sever Eucharistic Communication amid a row over church issues in the US, Canada, Finland, and Estonia. Perhaps this raised eyebrows in Constantinople, as the Russian Orthodox Church itself never received from the Mother Church a tomos.

Today, as the ROC and the UOC MP have moved to sever ties with Constantinople, one thing is obvious: Russia sees the prospects of an independent church of Ukraine as a serious threat to its own regional influence and a blow to its neo-imperial ambitions.

Ukraine’s previous attempts to gain religious independence didn’t concern Moscow too much as the authorities in Kyiv were too wary of the Kremlin’s possible response and had remained too passive on the issue.

However, after Ukraine became an independent state, Moscow slammed it on what they thought was too much progress on the autocephaly issue. In 1991, the Council of the Ukrainian Orthodox Church (UOC) convened in Kyiv where an appeal to Moscow was signed by all attendees, including today’s top pro-Moscow cleric in Ukraine, Onufriy, to grant the UOC the long-sought autocephaly. In response, Russia didn’t hesitate to launch a smear campaign against Metropolitan Filaret, who was at the time head of the Ukraine Church, which led to him being removed from the post. It was a different attempt (unfortunately not a successful one) to establish the independent Ukrainian Orthodox Church in a hope to be recognized by other Orthodox Churches.

That was the moment a split was driven into Ukraine’s religious unity; the Moscow Patriarchate and the newly-emerged Kyiv Patriarchate each insisted on having its own way. While the Kyiv Patriarchate was isolated from the world Orthodox community, largely as a result of an effective ROC campaign, Moscow’s games in Ukraine made possible the emergence of a third religious entity, the Ukrainian Autocephalous Orthodox Church.

In April 2018, Ukraine witnessed some real progress on the issue. President Petro Poroshenko met with Patriarch Bartholomew and the process to receive the tomos from the Ecumenical Patriarchate of Constantinople was launched.

Unlike the previous attempt, this appeal included the official signatures of the president, the parliament, and Orthodox leaders, including part of the bishops of the Moscow Patriarchate. In turn, Constantinople reaffirmed it has the right to consider such appeals, accepted the submission, and decided to initiate the procedure for issuing the tomos.

The unfolding developments bewildered the Russian Orthodox Church even though it was informed of Constantinople’s intentions.

Senior Russian clergyman Metropolitan Hilarion traveled abroad, pushing local religious leaders to take Moscow’s side and defy Constantinople. Meanwhile, the Russian propaganda machine, with the kind help of its minions in Ukraine, spun fake stories claiming the tomos was a no-go and sowing distrust in the minds of Ukrainians.

Despite Moscow’s efforts, the process kept moving forward, and on July 28 Constantinople’s envoys paid a visit to Kyiv on the 1030th anniversary of the Baptism of Kyivan Rus where they saw an impressive 60,000-strong religious procession led by the UOC-KP and UOAC bishops and attended by Ukraine’s top officials.

In an attempt to overshadow the event in Kyiv, Moscow Patriarch Kirill flew to Constantinople for closed-doors talks with Bartholomew I, although his trip yielded little to no result. Following the Holy Synod on October 11, the Ecumenical Patriarchate granted autocephaly to the Church of Ukraine. In a historic step, Constantinople not only declared that the UOC was not subordinate to the Russian Church, it also lifted Moscow’s excommunication orders of the leaders of the UOC-KP and UOAC.

Despite Moscow’s harsh reaction, the Ecumenical Patriarchate sent two of its envoys to Ukraine, a move Russia branded as illegal interference, to help to prepare for the inaugural meeting of the new independent Ukrainian Orthodox Church.

President Poroshenko recently offered the Moscow Patriarchate an opportunity to engage in a dialogue but the Council of Bishops refused, saying the UOC-MP would not take part in the setting up of the new independent local church in Ukraine.

“The door remains open,” Poroshenko said, while UOP Metropolitan Filaret never tires of repeating that the process is a peaceful one, and it does not involve any violence, forced seizures of churches or an all-out “religious war,” something that Russian propaganda says is inevitable.

An overwhelming majority of Ukrainians considers the receiving of autocephaly by the Ukrainian Orthodox Church to be a significant step needed to protect unity in the country. One can hardly overestimate the importance of Ukraine’s spiritual independence from Moscow. Some experts even compare it with the restoration of Ukrainian independence in 1991. This may be. In any case, Ukraine’s departure from its Russian colonial past is irreversible.

Olexander Samarskyi is the deputy CEO of the Center for Russian Studies in Kyiv, Ukraine.