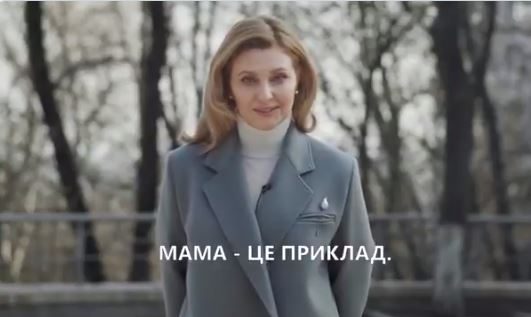 First Lady of Ukraine Olena Zelenskyy speaks on March 22 in Kyiv, Ukraine, about ways to protect children during the coronavirus pandemic. Credit: Ministry of Heath of Ukraine

The coronavirus may hit Ukraine hard. With its anemic health care system, large elderly population, and less than 1,000 life-saving ventilators in the country, all bets are off. Ukraine’s leaders have rightly closed airports and public transport.

On March 22, the Office of the President of Ukraine issued a short video featuring First Lady Olena Zelenskyy and three other famous mothers giving their tips for staying healthy during the pandemic. The ninety-second video was remarkable in whom it did not feature. There was not a man or father. Instead, it’s all up to Ukraine’s tough and heroic women to weather the pandemic and keep their children and country safe. “Women are the example,” Olena Zelenskyy says soothingly in a pale blue overcoat.

But where are Ukraine’s dads? The bars have been shut, offices are largely closed, and public transport has stopped, so they are home. Why aren’t they examples as well? Why don’t they have any responsibility for their children? Why does everything in the private sphere depend on Ukraine’s amazing women yet again?

Last year, I wrote a column urging Mrs. Zelenskyy to take on a greater public role than her predecessors, to politely tell her husband to stop saying demeaning things about women, and to hire more women in his cabinet. He eventually hired four female ministers. I asked Mrs. Zelenskyy to move beyond the important but entirely predictable issues of children and education and sink her teeth into press freedom and human rights – issues that she knows and cares about deeply. She’s done nothing of the sort, President Zelenskyy’s team has continued to say sexist and stupid things about women, and the president now only has one woman in his cabinet, after the March 4 government reshuffle.

The frozen image of gender relations that the Zelenskyys are projecting isn’t the Ukraine I know. Ukraine is not the United States, and gender roles are much stricter there than here. But in the more than ten years I have spent living in and studying Ukraine, things are changing. I know dozens of terrific and involved fathers who do more than fifty percent.

For the first time ever in Ukraine, I espied a man pushing a baby stroller by himself in sunny Kaniv this summer and was stunned. Kaniv, a town in central Ukraine with less than 25,000 people, is hardly cosmopolitan.

Young fathers are also playing a greater role in the lives of their children, and I’ve discovered that there are in fact a few stay-at-home fathers in Kyiv.

Please do not misunderstand me. This column isn’t an attempt to unleash a feminist revolution in Ukraine, but rather to ask a simple question: where are Ukraine’s dads, and why aren’t they an example during the pandemic as well?

Why are men still running everything in Ukraine?

On inauguration day, the new president issued a picture of him and his inner team strutting down the red carpet. The picture is remarkable for the energy it conveys but it’s also remarkably male. There are no women in his inner circle.