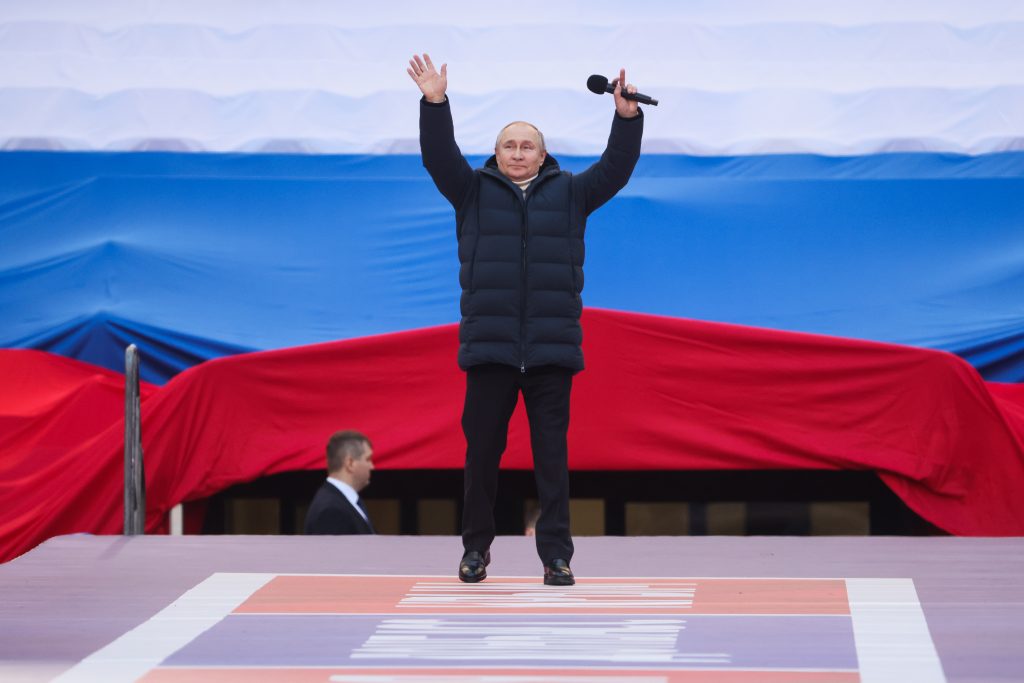 Just over three weeks since he launched Europe’s first full-scale invasion since World War II, it is already increasingly obvious that Vladimir Putin has badly miscalculated. He appears to have sincerely believed Kremlin propaganda fairytales about the weakness of the Ukrainian military and the readiness of ordinary Ukrainians to welcome his invading troops with cakes and flowers.

Likewise, he seems to have been completely unprepared for the ferocity of the international response or for the scale of domestic opposition to his invasion. Thanks to these catastrophic miscalculations, Putin now finds himself with no good options to end a war that is threatening to accelerate Russia’s geopolitical decline as a great power.

Russia’s growing international isolation underlines how toxic Putin’s war has made his country. Sanctions continue to mount as global brands rush for the exit. On March 16, Russia was thrown out of the Council of Europe. There has also been renewed talk of the need to reform the United Nations Security Council in order to strip Russia of its present veto power or possibly even suspend the country entirely.

Meanwhile, the International Court of Justice (ICJ), the UN’s highest court in The Hague, ruled in favor of Ukraine on March 16, dismissing Kremlin claims of a “genocide” against Russian-speakers in eastern Ukraine and demanding Russia immediately halt hostilities against Ukraine.

Also in The Hague, the International Criminal Court has already launched an investigation into Russian war crimes committed during the invasion. This probe will benefit from record amounts of video and photo evidence along with first-hand accounts of atrocities and illegal orders provided by captured Russian troops.

Putin’s disastrous misjudgement of the likely reaction to his planned invasion adds credibility to reports that the Russian leader has become increasingly detached from reality in recent years. This detachment is widely attributed to Putin’s bunker-like existence of physical isolation throughout the Covid-19 pandemic, along with his reliance on rose-tinted reports provided by yes-men within his immediate entourage who are understandably eager to avoid challenging their leader’s twisted worldview.

Putin’s most costly miscalculation was his expectation of a warm welcome and an easy victory in Ukraine. This was rooted in his obsessive denial of Ukraine’s existence as a separate state and insistence that Ukrainians are really just Russians (“one people”).

Putin’s refusal to acknowledge Ukraine as a separate nation reflects his attachment to the dogmas of nineteenth century Russian imperialism. This shapes his belief that Ukrainian independence is a temporary historical injustice caused by the collapse of the USSR, an event he has referred to as “the demise of historical Russia.”

Putin saw the invasion of Ukraine as a decisive step towards “reuniting” Russia’s divided lands. But this completely misread the mood in Ukraine and fatally underestimated the strength of Ukrainian national identity.

Far from greeting Russian troops as liberators, Ukrainians have inflicted catastrophic losses on Putin’s invaders. Estimates of Russian losses during the first three weeks of the conflict range from 7,000 and 14,000 troops along with hundreds of tanks and vast quantities of other military vehicles. These figures are fast approaching total Soviet losses during the entire ten-year Afghan War.

Putin is not alone in his complete misunderstanding of contemporary Ukrainian realities. Virtually no Russian politician, academic, or analyst appears to understand Ukraine. Instead, they seem trapped in an imperial mindset and have refused to learn the lessons of 2014, when Moscow’s first attempt to invade south-eastern Ukraine was largely derailed by unexpectedly strong local opposition.

The situation now confronting Putin’s troops is considerably worse than eight years ago. Russian war crimes during the first three weeks of the invasion have destroyed any lingering pro-Russian sentiment that remained following 2014. Today, there is negligible support for pro-Russian politicians in Ukraine. Any attempt to impose a Kremlin puppet administration would have no legitimacy. In order to maintain control of the country and overcome popular resistance, Putin would need to deploy around half of the entire Russian army.

Putin’s wishful thinking on Ukraine was mirrored in his expectations that the West would be divided over the war and would repeat the mistakes of 2014 by imposing weak sanctions. However, on this occasion the West has offered a far more united front and has imposed some of the most crippling sanction measures ever seen. Alongside governmental sanctions, hundreds of multinationals have pulled out of Russia and cut all ties with the country.

Western nations have also defied Russian warnings and continue to provide Ukraine with unprecedented arms shipments. These weapons have had a major impact on the course of the conflict, enabling Ukraine to destroy column after column of Russian armor, while in many places allowing Ukrainian forces to bring Putin’s offensive to a grinding halt.

After years as Europe’s leading advocate of engagement with Russia, Germany has finally moved beyond the era of “Ostpolitik” and abandoned the cult of the “Putinversteher” (“Putin Understanders”). Berlin has officially closed the controversial Nord Stream II pipeline and reversed its earlier refusal to arm Ukraine. German leaders have also vowed to decrease the country’s dependency on Russian energy.

Even China has shown signs of unease over the barbarity of Putin’s war and appears increasingly reluctant to align itself publicly with Russia. Breaking with its traditional diplomatic support for Moscow, Beijing has abstained from United Nations votes denouncing the invasion.

Putin’s other great miscalculation was towards the Russian people. The current full-scale invasion of Ukraine will never generate the same levels of domestic support as the 2014 seizure of Crimea, which remains an event widely celebrated by the vast majority of Russians.

The current war lacks the imperial romance and relatively bloodless appeal of Crimea. Protests inside Russia are already evident and are likely to grow further as the scale of the country’s losses in Ukraine becomes apparent to the Russian public.

In the 1980s, the totalitarian Soviet Union could not prevent knowledge of casualties in Afghanistan from reaching domestic audiences. Despite suffocating state control over the Russian mainstream media and the recent closure of many flagship international social media platforms, Putin will struggle to prevent ordinary Russians from learning the true cost of his war in Ukraine.

This process is also being facilitated by the information warfare successes of Ukraine and the country’s international allies including the Anonymous cyber collective, which continues to hack into Russian television and government websites with anti-war slogans and footage of Russian atrocities. As more and more Russians become aware of the war crimes being committed in Ukraine, this will further fuel political instability.

The Russian dictator now finds himself an international pariah while Russia’s reputation as a military superpower lies in tatters. Putin can continue to pummel Ukrainian towns and cities into submission for some time to come, but the setbacks of the past three weeks make clear that Russia has little chance of establishing lasting control over the country.

It would appear that Putin simply fell victim to his own propaganda. He drank the Kremlin Kool-Aid and believed his Ukraine war would be an imperial triumph with minimal costs on the domestic and international fronts. These assumptions have proven to be grave miscalculations that will weigh heavily on Russia for decades to come.

Taras Kuzio is a Research Fellow at the Henry Jackson Society and Professor of Political science at the National University of Kyiv Mohyla Academy. He is author of the recently published book “Russian Nationalism and the Russian-Ukrainian War.”