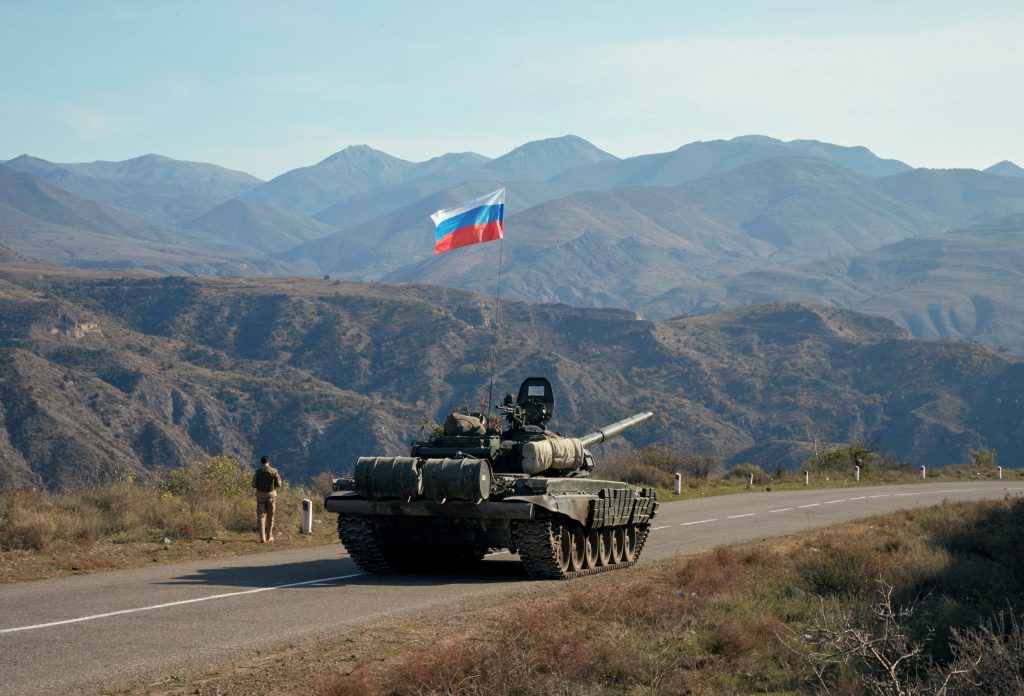 Russian President Vladimir Putin appears to have achieved a significant victory this week in Nagorno-Karabakh that threatens to alter the geopolitical balance throughout the former Soviet space in his favor.

By brokering a Kremlin-friendly peace between Azerbaijan and Armenia, Putin has succeeded in considerably expanding Russia’s military presence in the strategically important Southern Caucasus region. Crucially, he has done so without encountering any Western pushback. This unchecked advance should set alarm bells ringing in other ex-Soviet republics such as Ukraine, Belarus, and Moldova.

The big lesson of the Azerbaijan-Armenia peace settlement is that military power rules. In a matter of weeks, the use of force has achieved what decades of diplomacy failed to deliver. The only two relevant international players in the South Caucasus region are Russia and Turkey. The United States has taken leave, while the European Union is a paper tiger without troops.

The war between Armenia and Azerbaijan was one of four so-called frozen conflicts that erupted during the collapse of the Soviet Union. Joseph Stalin paved the way for hostilities decades earlier when he transferred the ethnically Armenian autonomous territory of Nagorno-Karabakh (which means “mountainous black garden”) to Azerbaijan. The aim was to encourage confrontation between Armenians and Azerbaijanis and keep them in check.

Ethnic tensions flared up in 1988 and eventually led to a full-scale war between the two fledgling independent states amid the ruins of the Soviet Empire. The war was halted by a precarious ceasefire in 1994, when Armenian troops controlled not only Nagorno-Karabakh itself but also seven other nearby districts of Azerbaijan, forcing approximately one million Azerbaijanis to flee.

The Organization for Security and Cooperation in Europe (OSCE) was supposed to resolve this conflict diplomatically. It formed the so-called Minsk Group, which was co-chaired by Russia, the United States, and France. This format persisted but achieved no real breakthroughs despite many meetings. Meanwhile, bloody fighting continued to erupt periodically along the front lines of the barely frozen conflict, without ever leading to any major shifts in the military balance.

In the eyes of most outside observers, the heavily outnumbered and increasingly outgunned Armenians appeared to hold a losing hand. Azerbaijan is far larger than Armenia and has benefited greatly from rising oil riches since around 2000. It also has a powerful ally in Turkey, which borders on Armenia and has kept its border closed. This unfavorable predicament fueled calls for Armenia to seek a sustainable settlement that would allow the country to hold onto Nagorno-Karabakh while giving up other Azerbaijani territories.

Nor did Armenia have any obvious reason to occupy all the Azerbaijani land it held beyond Nagorno-Karabakh. Armenia hosts a Russian military base and has a defense pact with Russia, but this pact covers only internationally recognized Armenian territory.

The obvious conclusion was that sooner or later, Azerbaijan would use its growing military superiority to carry out a serious attack on Armenia and retake its territories. On September 27, Azerbaijan launched such an attack. Equipped with new Turkish and Israeli drones, it overcame Armenia’s defenses. Azerbaijani troops advanced steadily, and on November 9 took the ancient fortress town of Shusha in Nagorno-Karabakh. Armenian forces seemed close to complete collapse.

After a number of prior diplomatic overtures, Putin now stepped in decisively and seemingly with Turkish consent. He concluded a joint declaration between Russia, Azerbaijan, and Armenia to end the fighting. It was signed by Putin, Armenia’s Prime Minister Nikol Pashinyan, and Azerbaijan’s President Ilham Aliyev.

In the first paragraph of the declaration, the three parties declared: “A complete ceasefire and cessation of all hostilities in the Nagorno-Karabakh conflict zone is announced from midnight, Moscow time, November 10, 2020. The Azerbaijani Republic and the Armenian Republic…will stop at their current positions.”

Essentially, Azerbaijan has retaken the territories it lost in 1994, and it has captured a corner of Nagorno-Karabakh. In addition, the agreement promises Azerbaijan a transportation link through Armenia to the Azerbaijani district of Nakhichevan, which lies beyond southern Armenia. In territorial terms, this settlement makes sense and may prove durable.

Putin has promised to deploy a peacekeeping contingent of “1,960 soldiers with small arms, 90 armored personnel carriers, and 380 vehicles and other special equipment,” which will serve along the contact line in Nagorno-Karabakh and guard the Lachin Corridor for an initial period of five years. Meanwhile, the Armenian armed forces will withdraw.

Russian special forces, many of whom fought in eastern Ukraine, began arriving in Armenia in IL-76 transportation planes on November 10. By sending these special forces as peacekeepers to Nagorno-Karabakh, Putin has made tiny Armenia even more dependent on Russia, leaving it looking less like an independent nation and increasingly like a Russian protectorate.

Armenian PM Nikol Pashinyan came to power via a democratic uprising in 2018 and is no favorite of Putin, who is allergic to people power movements and much preferred the country’s previous kleptocratic rulers. By refusing to provide Russian military support to Armenia earlier, Putin has cut Pashinyan down to size.

Angry Armenian nationalists stormed government buildings in Yerevan as news broke of the agreement with Russia and Azerbaijan, but Pashinyan clearly saw no better alternative than accepting a humiliating peace deal. It remains to be seen whether the Armenian kleptocrats from Nagorno-Karabakh who are favored by Putin will now regain power in Yerevan. Whatever comes next, Moscow has the satisfaction of seeing a champion of post-Soviet democracy disgraced and discredited.

Turkey’s President Recep Tayyip Erdogan has also emerged from the conflict victorious. The only international actors of consequence involved in this conflict and its resolution were Russia and Turkey. Turkey backed Azerbaijan strongly and Putin consulted with Erdogan, though the ceasefire agreement itself excluded Turkey. This leaves all arbitration between Azerbaijan and Armenia in the Kremlin’s hands, even if the declaration does not spell this out.

Meanwhile, the Minsk Group, the OSCE, the United States, France, and the European Union have all been rendered irrelevant in the region. The United States looks particularly ridiculous, since the Armenian and Azerbaijani foreign ministers were in Washington on October 23. Both had separate meetings with Secretary of State Mike Pompeo, but they did not see one another and no agreement was concluded.

The nature of the Azerbaijani-Armenian conflict reflects a changing international environment. The United States seems to have withdrawn from global affairs; the EU has no military muscle; and the West in general has grown alienated from Turkey. This has left the way open for authoritarian rulers like Putin and Erdogan to seize the geopolitical initiative. Indeed, recent events in the Southern Caucasus hark back to nineteenth century German Chancellor Otto von Bismarck’s words: “The great questions of the day will not be settled by speeches and majority decisions but by iron and blood.”

In geopolitical terms, the most important outcome of the conflict is the appearance of a significant Russian military presence in Nagorno-Karabakh. Russian “peacekeeping” missions already exist in three other “frozen” post-Soviet conflicts. They are present in Moldova’s Transnistria region, along with Abkhazia and South Ossetia in Georgia. A similar Russian military force is now firmly established in the heart of the Southern Caucasus region, fulfilling one of Moscow’s long-term objectives in the region.

For Ukraine in particular, the passivity of the West during the Karabakh War is ominous. As a consequence, Russia has been able to expand its military presence within the borders of the former Soviet Empire without facing any serious opposition from the West. As Ukrainian columnist Vitaly Portnikov warns, this considerably increases the risk of Russian “peacekeepers” appearing in eastern Ukraine.

Image: A member of the Russian peacekeeping mission walks near a tank close the border with Armenia on November 10 following the signing of a deal to end the military conflict between Azerbaijan and ethnic Armenian forces in Nagorno-Karabakh. (REUTERS/Francesco Brembati)