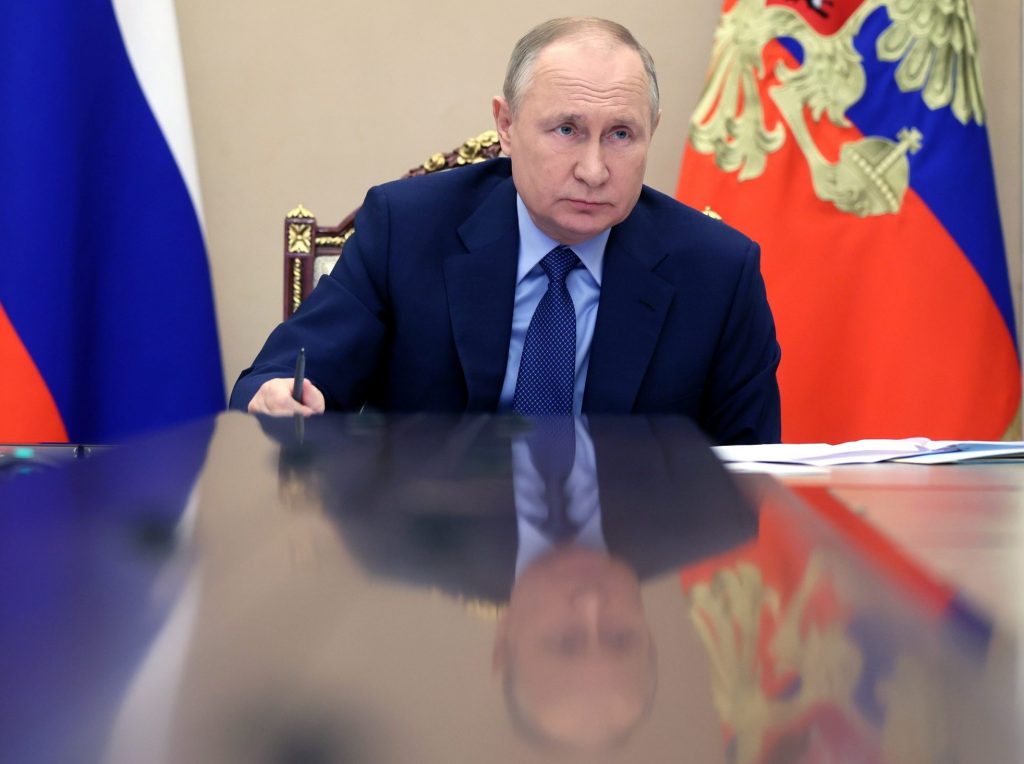 Vladimir Putin is currently menacing the world with the prospect of a major war. Having massed a vast invasion force of over 100,000 troops on the Ukrainian border, the Russian ruler now wants international audiences to believe that his actions are a reasonable response to the eastward expansion of the NATO alliance.

Unfortunately for the Kremlin, there is virtually no evidence to support these claims of a looming NATO threat. Instead, Putin’s saber-rattling is the latest symptom of an obsession with Ukraine that has already plunged the world into a new Cold War and could soon spark the biggest European conflict since the days of Hitler and Stalin.

In recent weeks, Putin has issued a series of increasingly insistent requests for guarantees that Ukraine will never join NATO, with Kremlin officials threatening a “military response” if their demands are not met. The urgency of Moscow’s ultimatums would suggest that Ukraine is on the verge of NATO membership. In fact, nothing could be further from the truth.

At this point, the closest Ukraine has ever come to joining NATO is a vague and largely symbolic commitment to future membership received at the alliance’s 2008 summit in Bucharest. While this pledge has been repeated on numerous subsequent occasions, it carries no real weight and is essentially a reaffirmation of the alliance’s standard open door policy towards all potential new members.

Since 2014, Russia’s undeclared war against Ukraine has sparked understandable alarm within NATO and led to an increased military presence in front line member countries close to the conflict. However, there has been no progress whatsoever towards possible future Ukrainian membership. On the contrary, NATO members have repeatedly downplayed Ukraine’s chances of joining the alliance, and have either politely ignored or directly rejected increasingly vocal Ukrainian calls for a NATO Membership Action Plan.

While Ukraine has virtually zero chance of joining NATO for the foreseeable future, Putin has suggested that growing informal ties also pose a threat. However, his concerns over the possible deployment of NATO missiles to Ukraine bear little resemblance to reality. Far from shipping sophisticated missile systems to the country, NATO members currently stand accused of preventing Ukraine from purchasing even basic defensive weapons.

Nor is it clear why Putin believes Ukraine represents such a security challenge in this regard, given that Estonia, Latvia, and Lithuania are all just as close as Ukraine to Moscow and have been NATO members since 2004. If the alliance genuinely sought to deploy missiles along the Russian border, it has had almost two decades to do so in the Baltic region. Needless to say, NATO has done no such thing. Indeed, the entire notion of a NATO attack on Russia is so far-fetched that it rarely features anywhere beyond the fever dreams of Kremlin propaganda.

NATO’s ultra-cautious approach towards Ukraine makes a mockery of Putin’s claims that the alliance is seeking to “gain a foothold” in the country. In reality, it is Ukraine that is desperately banging on NATO’s door in search of security against ongoing Russian aggression. Meanwhile, the alliance has been strikingly reluctant since 2014 to arm Ukraine or do anything that might encourage the country’s membership aspirations.

Russia’s concerns over NATO enlargement are not entirely fabricated, of course. Moscow has long complained about the post-1991 expansion of the alliance beyond the old Iron Curtain, and has frequently accused NATO of intruding into a region that Russia regards as its geopolitical backyard.

Nevertheless, there is nothing in NATO’s recent actions that could conceivably explain Putin’s sudden insistence on security guarantees or justify his thinly-veiled threats of overwhelming military force. He has simply decided to use the perennial issue of NATO expansion as an excuse to manufacture an artificial crisis with the aim of isolating Ukraine from the democratic world as part of his eight-year war against Ukrainian independence.

The current confrontation should not come as any surprise. Ukraine has been at the heart of deteriorating relations between Russia and the West for much of Putin’s reign.

The emergence of a genuinely independent and democratic Ukraine is viewed by many in the Kremlin as a direct attack on Russia’s imperial identity and an existential threat to the country’s authoritarian system of government. For a generation of Russian leaders still haunted by the pro-democracy uprisings that sparked the collapse of the USSR, the rise of a European Ukraine looks ominously like the next stage in a nightmare scenario stretching all the way back to the fall of the Berlin Wall.

Putin himself underlined the extent of his preoccupation with Ukraine in July 2021 when he published an almost 7000-word essay openly questioning the historical legitimacy of Ukrainian statehood while insisting Russians and Ukrainians are “one people.” “I am confident that true sovereignty of Ukraine is possible only in partnership with Russia,” the Kremlin strongman declared.

Such sentiments are an indication of the central position independent Ukraine occupies in Putin’s revisionist worldview. When he describes the fall of the Soviet Union as “the disintegration of historical Russia” and “the greatest geopolitical catastrophe” of the twentieth century, it is primarily the emergence of an independent Ukraine that he has in mind.

During the past year, Putin appears to have become increasingly obsessed with the idea of Ukraine as a kind of "anti-Russia." He is dismissive of Ukrainian agency and prefers to view the country's European choice as part of a Western plot to destabilize Russia. At the same time, he recognizes that as Ukrainian democracy matures and consolidates, it will inevitably inspire demands for similar change within Russia itself and serve as a growing threat to his own authoritarian regime.

For Putin, the issue of Ukraine is also deeply personal. When he first came to power at the turn of the millennium, Russia and Ukraine were still so close that the idea of a military confrontation between the two countries would have been greeted with a mixture of amusement and incomprehension. Much of the responsibility for the dramatic subsequent collapse in bilateral ties rests squarely on the Russian president’s shoulders.

Putin’s first major blunder came in 2004, when he chose to visit Kyiv on the eve of Ukraine’s presidential election to openly campaign for his preferred candidate. This heavy-handed intervention was a grave miscalculation, infuriating millions of previously apolitical Ukrainians and directly helping to provoke the pro-democracy Orange Revolution.

Ten years later, he responded to a second Ukrainian pro-democracy uprising by ordering the invasion of Crimea and eastern Ukraine. The war unleashed by Putin in 2014 continues to this day and has proven disastrous for Russian ambitions in Ukraine. While Moscow has managed to occupy around 7% of the country, Russian influence throughout the rest of Ukraine has plummeted to historically unprecedented lows. Pro-Russian political parties have been marginalized while successive governments in Kyiv have kept the country on a course towards greater Euro-Atlantic integration.

Putin is painfully aware that his entire legacy now depends on his ability to reverse this trend. Unless he succeeds in the historic mission of returning Ukraine to the Kremlin orbit, he will be remembered by future generations of Russians as a failure. After more than three hundred years of Russian domination, Putin is poised to enter the history books as the man who lost Ukraine.

Putin now appears intent on using the prospect of a full-scale European war to blackmail the West into abandoning Ukraine. It is vital for the future of the rules-based international order that his intimidation tactics do not succeed.

The outcome of the current confrontation in Ukraine will go a long way towards determining the tone of international relations for decades to come. If Russia is able to turn back the clock to an era of great power politics and spheres of influence, Ukraine will not be the last country to find itself subjugated in this manner. Instead, the entire world will face a new era of international insecurity.

Confronting Putin in Ukraine requires levels of Western unity and resolve that have so far proven elusive. Ever since the conflict began with the invasion of Crimea in February 2014, many in the international community have shied away from confronting the Kremlin and have instead sought to appease Putin.

These advocates of appeasement seem to believe that by minimizing Western engagement and support for Ukraine, they can avoid provoking further Russian aggression. This is dangerously delusional. In fact, nothing is more likely to provoke the Kremlin into aggressive action than the suggestion that Ukraine stands alone.

Instead, the democratic world should be looking to radically enhance Ukraine’s integration. If joining NATO is not currently feasible, other forms of comprehensive military alliance should be urgently explored. Similarly, while full membership of the European Union may take decades to achieve, Brussels needs to dramatically upgrade its engagement without delay and undertake the kind of comprehensive national modernization initiatives that will make Ukraine’s eventual progress towards EU member status a foregone conclusion.

From a Russian perspective, the stakes in Ukraine could hardly be higher. Putin has already demonstrated that he is prepared to pay an exceptionally high price in order to prevent Ukraine’s departure from Russia’s sphere of influence. His current actions reflect his confidence that the democratic world will ultimately opt for concessions over confrontation.

It is now up to Western leaders to prove Putin wrong. Until they bring Ukraine decisively out of the geopolitical gray zone, the country will remain a target of Russian imperial aggression and a key source of global instability.

Image: Russian President Vladimir Putin chairs a meeting on the country's coal-mining sector, following a deadly accident at the Listvyazhnaya mine in the Kemerovo region, in Moscow, Russia December 2, 2021. (Sputnik/Mikhail Metzel via REUTERS)