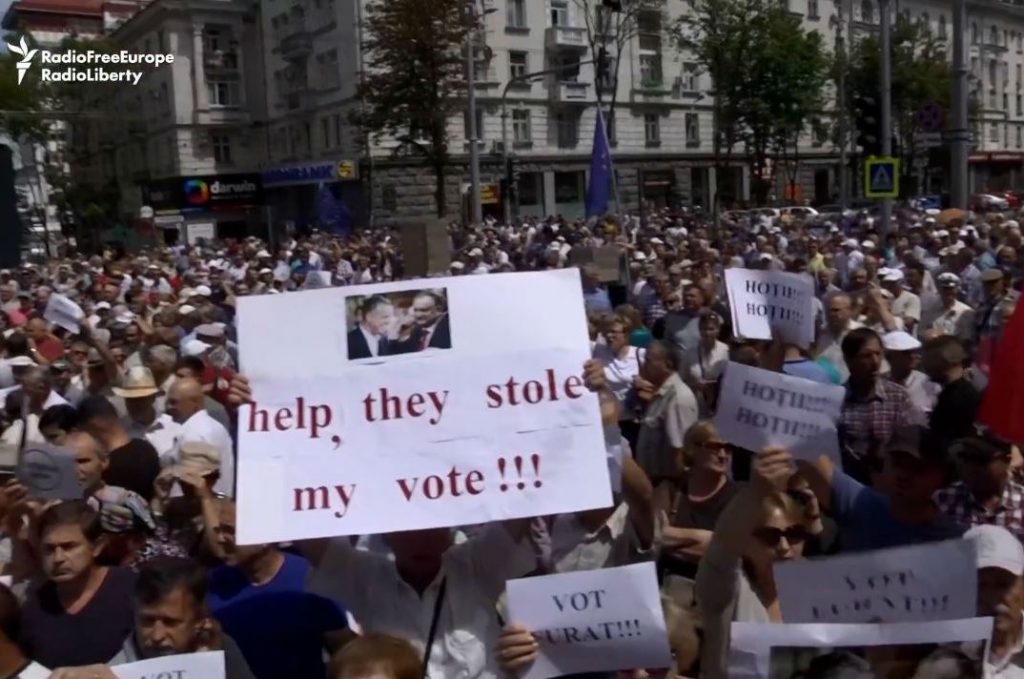 Protesters are taking to the streets of Moldova’s capital of Chisinau again.

On June 3, Andrei Nastase was elected mayor of Chisinau with 52.5% of the vote. Nastase, a pro-European prosecutor and anti-corruption activist, defeated Socialist Ion Ceban who favors closer ties to Moscow. On June 19, a Chisinau court struck down the election results, and the Moldovan Appeals Court upheld the decision on June 22. The case now rests with the Supreme Court of Justice.

Nastase claims that the decision to cancel the results is politically motivated. He was one of the organizers behind Moldova’s large protests in 2015 after $1 billion vanished from the banking system.

Why is an ostensibly pro-Western government in Moldova allowing a court to invalidate these election results? Are the court decisions politically motivated? Is this government really committed to democratic values? What does it mean for Moldova’s long-term prospects? We asked Atlantic Council experts and UkraineAlert contributors to weigh in.

Michael Carpenter, former US Deputy Assistant Secretary of Defense, Senior Director at the Biden Center, and Nonresident Senior Fellow at the Atlantic Council: The decisions by Moldova’s courts to annul the results of the Chisinau mayoral election raise troubling questions about the sanctity of the democratic process in Moldova. For a court to overturn an election, there need to be serious process violations that preclude a level playing field among the candidates, and so far at least it is not clear that such serious violations occurred in this latest election. Particularly because the Moldovan judiciary was directly implicated in laundering over $20 billion dollars in illicit Russian funds to Western financial institutions, its credibility is at rock bottom. These latest court decisions only underscores the urgent need to overhaul the entire judicial system in Moldova.

Agnia Grigas, Nonresident Senior Fellow, Atlantic Council: Invalidating the results of a democratic vote are an unprecedented development for Moldovan democracy. It would be gravely concerning if this decision were politically motivated—and there is some reason to believe that it could have been. The turn of events suggests that oligarchs maybe playing a disproportionate role in Moldova’s democratic processes as they support different political candidates and vie for power. The Supreme Court of Moldova should offer an explanation and clarify the path forward, especially given that these emerging practices could set a precedent for and be applied to the upcoming parliamentary elections.

Rebecca Harms, Member of the European Parliament and chair of the Euronest Parliamentary Assembly: I urge the Moldovan authorities to take immediate action to ensure that the rule of law prevails in the management of the outcome of the local elections and in the run up to the upcoming parliamentary elections later this year.

John E. Herbst, Director of the Eurasia Center, Atlantic Council: For about a decade, Moldova has been ruled by parties that proclaim their European vocation and commitment to democracy and an open society. These parties and the European vision suffered a major blow in 2015 when it became clear that major figures in their ranks were involved in the massive bank fraud that shook Moldova. Sadly the June 19 and 22 court decisions invalidating the Chisinau mayoral elections, won by reformer Andrei Nastase, have dealt another blow to Moldova’s democratic development. The court decisions claim that the vote was invalid for the technical reason that both candidates in the race continued to address voters through social media after the legal end to the campaign. Nastase claims that the vote was invalidated by the powerful Democratic Party, whose candidate, nominally independent, Mayor Sylvia Radu, lost in the first round of the mayoral elections and resigned.  Nastase’s claim is made more plausible by the fact that if the Moldovan Supreme Court upholds the voiding of the election, Radu’s erstwhile deputy remains as acting mayor.

It would be tragic if the Supreme Court permitted the invalidation of an election for technical reasons. Such an outcome would also cast further doubts on the democratic credentials of the ruling parties.

I was on the ground during the Orange Revolution in Kyiv, Ukraine, and remember how the ruling parties there tried to steal the mayoral election in Mukachevo, a city in western Ukraine, in the spring of 2004. It was a trial run for their efforts to steal the presidential election that fall. L’affaire Chisinau has a similar odor in light of this fall’s parliamentary elections in Moldova.

Timothy Fairbank, Nonresident Senior Fellow, Atlantic Council: The Moldovan court system’s decisions to invalidate the results of the Chisinau mayoral election, a vote deemed fair and transparent by observers, is a disturbing sign that makes one question whether the authorities respect the will of the people. These decisions appear politically motivated and mark the most undemocratic action in the country’s twenty-six-year history.

The current government has taken some encouraging steps toward reform and has been a solid partner of the European Union and United States. This event, however, suggests they are afraid of losing hold of vital administrative resources leading up to the November parliamentary elections.

Many citizens and observers view this attempt to obstruct the will of the people to be a red line. Moldova’s long-term democratic prospects are in question, but seeing thousands of people exercising their right to protest and stand up for democracy and rule of law is an encouraging sign.

Jonathan D. Katz, Senior Fellow, German Marshall Fund: The politically motivated decision by Moldovan courts to dismiss the results of the June 3 Chisinau mayoral election is a step backward for Moldova’s democracy. It will have serious ramifications for the country’s integration into the Euro-Atlantic community. Despite the strong urging of the United States, European Union, and other partners to respect the rule of law and uphold the results, Moldova’s ruling elites are ignoring the will of the Moldovan people to advance their own narrow interests. This situation is already impacting US and international confidence in the Moldovan government’s ability to carry out free, fair, and transparent parliamentary elections in the fall.

Gina Lentine, Program Officer, Europe & Eurasia, Freedom House: We urge the Supreme Court of Justice to offer a fair and objective review of the appeal. The rule of law must be respected; otherwise, this decision could have the appearance of nullifying a popular vote and directly disenfranchising citizens. Journalists play an important role in informing the public about these decisions, and so far they have had access to the courts where the appeal is taking place. We hope that this continues to be the case so they can carry out this important task.

Public protests in Chisinau regarding the court decision began on June 20 and are currently ongoing. The police have done their job so far and no foul play has occurred for the time being. In the meantime, we hope that freedom of assembly continues to be protected and that citizens can exercise their fundamental right to gather without facing threats, harassment, or extralegal intimidation.

Brian Mefford, Nonresident Senior Fellow, Atlantic Council: There is not a policymaker in the United States who doesn’t want Moldova to succeed. However, when we see kangaroo court rulings like this, all the pro-Western pronouncements from the Moldovan side fade away and we shake our heads in disappointment. Not only is campaigning on election day in America allowed, it is practiced by everyone. Clearly, the court decision is contrived and works against the interests of Moldovan democracy and the country’s future.

Nicu Popescu, Senior Analyst at the EU Institute for Security Studies: Most Moldovans think the courts are highly corrupt and subject to political influence. And the decision to suspend Nastase has all the markings of a political one, and an attempt to deny voters the right to choose their leaders through elections. It is the first time in twenty-six years of Moldovan independence that a court has attempted to reverse in such a visible manner an obviously uncontested election result without fraud. Nastase himself was congratulated by his political opponent, who acknowledged his defeat.

Having said this, both candidates broke the rules; they called people to go to the polling stations on election day. However, this is a minor irregularity. No allegations of voter fraud have been brought to the table. Campaign irregularities do happen. US President Donald Trump’s campaign is being investigated for irregularities, and the campaigners who supported Brexit also broke some campaign finance rules. Such things happen, but in democratic societies campaign irregularities, falling short of voting fraud, are not used to overturn elections or referendum results. As long as there is no massive fraud and ballot stuffing, (and in Chisinau at these elections there was none), voters, not courts, should decide election outcomes.

The decisions taken on questionable grounds indicate that progress in judicial reforms—for years a major focus of investment by international donors—is simply unsatisfactory.

Nevertheless, the fact that so many people are turning out in the streets to demand that the results be respected despite the continuing impact of the safety valve of emigration suggests that there is still a strong constituency for reform in the country.

Moldova has made considerable strides forward in recent years, notably in security sector reform and energy security. However, the country’s pro-European leaders both inside and outside parliament must act fast to build on the protests’ momentum and prepare to deliver results to their citizens—especially as the critical November elections approach.

Thomas de Waal, Senior Fellow, Carnegie Europe: Many Moldovan politicians want outsiders to view their country purely geopolitically, as a place whose soul is being fought over by the West and Russia. The attempt to annul the Chisinau mayoral election on what looks like a technicality, and the public response to it, shows how faulty that perspective is.

For almost all Moldovans, their biggest concern is domestic corruption. The man they chiefly blame for state capture—and now for this crisis—is Moldova’s de facto leader, Democratic Party President Vlad Plahotniuc. In this fall’s parliamentary election campaign, Plahotniuc will warn that he and his “pro-European” party are the only force standing in the way of a Russian takeover. Socialist president Igor Dodon will also play the geopolitical card.

The protests in support of mayoral candidate Andrei Nastase are less about Nastase himself than a signal that ordinary Moldovans reject this geopolitical framing and want something different.