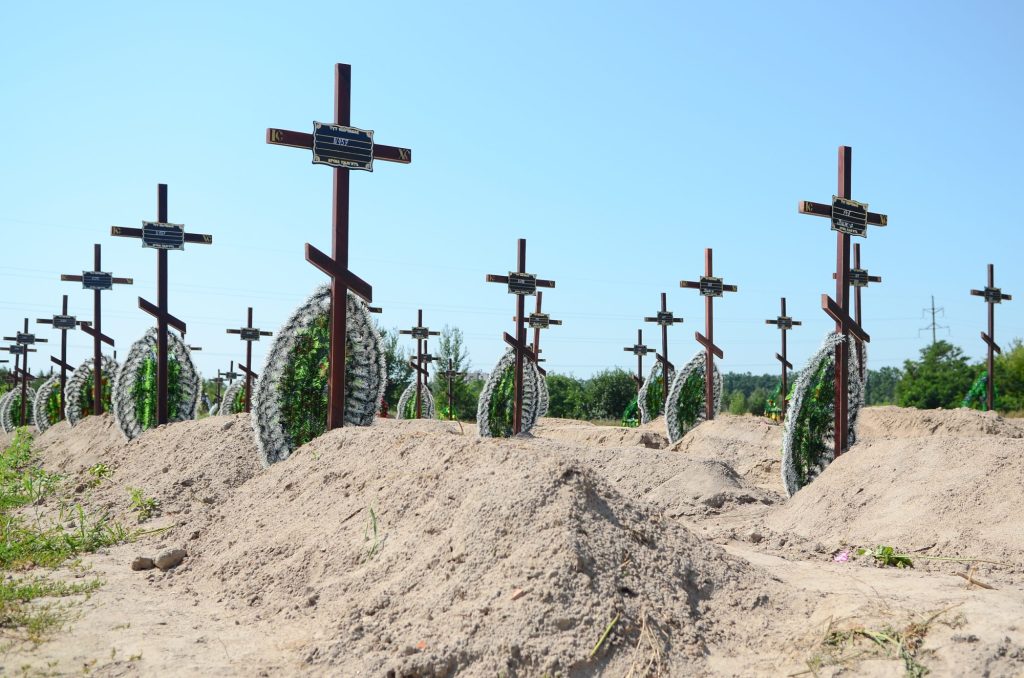 Many observers believe the current war in Ukraine could have been avoided if Russia had earlier confronted its troubling past. There is no way to know for sure if this is true, but it remains a fact that nobody has ever been held accountable for the Soviet regime’s countless atrocities. It is equally true that Ukrainians were among the chief victims. Millions of Ukrainians perished in the genocidal man-made famine known as the Holodomor, which was engineered by the Kremlin in the 1930s.

Putin came to power in this culture of impunity and has used it to his advantage. Over the past two decades, he has rehabilitated the Soviet past and revived the glorification of Russia’s imperial identity, making it possible to challenge Ukraine’s very right to exist. For this reason, it is imperative that Putin and other key members of his regime now face a long overdue reckoning. But is such an outcome even possible?

The most obvious route to a reckoning is via international justice. Given the massive scale of the crimes being committed by Russian forces in Ukraine, it is unclear what would be the best forum for prosecutions. Investigators from the International Criminal Court (ICC) are already investigating war crimes in Ukraine, while the UN Human Rights Council has established an Independent Commission of Inquiry. Meanwhile, the Ukrainians themselves have begun putting individual Russian soldiers on trial. These efforts will probably result in war crimes prosecutions but it may be many years before key verdicts are delivered. It is also extremely unlikely that Putin himself will ever end up in the dock.

With these uncertainties in mind, we need to ask what true accountability would look like. Holding criminals accountable is meant to deter them and others from future crimes, foster reconciliation between perpetrators and victims, and promote sustainable peace. As Putin’s crimes are rooted in an historic failure to impose accountability, any legal punishments for the invasion of Ukraine would only go so far in accomplishing these goals. Prosecuting war criminals must go hand in hand with efforts to challenge the historical narrative that drove the invasion in the first place. This means confronting Russia’s imperial identity and addressing the toxic notion that Ukrainians have no right to exist as an independent nation.

If Russia is to be held accountable, the international community must do everything possible to ensure a Ukrainian military victory and the liberation of all occupied Ukrainian land. Following Russia’s defeat on the battlefield, Ukraine will need to receive credible security guarantees offering protection equivalent to NATO membership. Likewise, Western leaders should commit to making Russia pay reparations. Above all, the war must end on Ukraine’s terms. Any attempts to push Ukraine into accepting a compromise peace would be an affront to the country’s immense sacrifices and would also fly in the face of the need for accountability. It is vital that Russia publicly recognize its guilt and acknowledge the sanctity of Ukrainian sovereignty.

One way to achieve greater accountability is by empowering Ukrainians. The international community must work to support Ukrainian society in its efforts to hold Russia accountable. This support should include everything from technical assistance to helping local civil society systematically gather evidence and document atrocities. Ukraine has a functioning legal system but it does not have nearly enough capacity to cope with the volume of war crimes committed by Russian forces over the past six months. International assistance can make a big difference.

Ukraine’s international partners should also assist in the long quest to identify all the victims of Russia’s genocide. For the average Ukrainian, anger at Putin may be something of an abstraction. Indeed, while he is the individual most directly responsible for the invasion, he is neither the soldier who pulled the trigger nor the one who launched the bombs that destroyed civilian homes, hospitals, and schools. Like genocidaires throughout history, Putin’s intent is to destroy Ukrainian culture, language, and national identity, but he does not act alone. Recognizing each and every victim is an important step towards meaningful accountability for the crimes committed against the Ukrainian nation.

We need to consider how to target Putin’s false historical narratives at their very roots. One way to do this is to recognize, as Yale historian Timothy Snyder has said, that we need more history and less memory. While it is an open question to what extent Russians themselves bear collective responsibility for Putin’s invasion, polls indicate that a clear majority of Russians do support the war. While exact figures remain elusive, many Russians have evidently bought into Putin’s views of history. With Russia becoming an increasingly closed and authoritarian country, where does that leave those of us who want to see accountability from the inside out?

Here, we need to think beyond the immediate term. “Canceling” Russian culture is not necessarily the answer, but amplifying Ukrainians and their culture absolutely is. Getting their stories to Russians is critical, whether through technologies like VPNs or by supporting the Russian investigative journalists who have fled the country but are continuing their courageous work while based outside Russia.

Here in the West, we can work to advance public awareness, both of today’s Russian genocide and of historic Soviet crimes. This means making sure we document them in history books, teach them in schools, memorialize the victims in public places, and even recognize our own complicity in ignoring past events like the Soviet-era Holodomor famine in Ukraine.

Putin and his regime must face legal punishment for the genocidal invasion of Ukraine. But in order to achieve meaningful accountability, we must also address the unrepentant imperialism that makes it possible for Russians to dehumanize Ukrainians and destroy entire Ukrainian cities. This will require a long-term approach to historical justice that goes beyond the courtroom and seeks to strengthen every aspect of Ukrainian statehood while fundamentally challenging the way Russians view their own past.

Danielle Johnson holds a PhD in Politics from Oxford University and specializes in Russian and Ukrainian affairs.