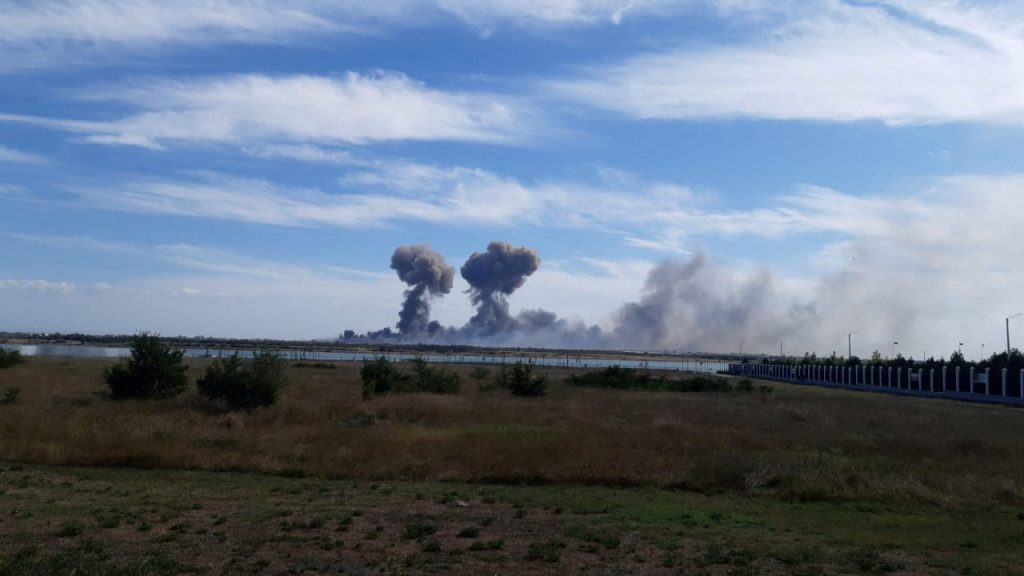 Ukraine appears to have struck deep inside Russian-occupied Crimea for the first time on August 9 with an audacious attack on a heavily defended military base. The explosions at western Crimea’s Saki airbase rattled nerves in Moscow and sparked panic throughout the Russian-occupied Ukrainian peninsula, with traffic jams reported on routes leading to the Crimean Bridge as Russian holidaymakers scrambled to cut short their vacations.

The exact nature of the suspected Ukrainian attack is still unclear. The Washington Post cited unnamed Ukrainian officials calling it a Special Forces operation. Other international media reports confirmed Ukrainian responsibility without providing specific details. In the hours following the blasts, much of the debate among military analysts centered on whether the damage was caused by missiles, airstrikes, or combat drones. Satellite images have since revealed large-scale destruction at the site.

Speaking on Tuesday evening, Ukrainian President Volodymyr Zelenskyy stopped short of confirming the involvement of the Ukrainian military. However, in an apparent nod to the airbase attack, he did note that Russia’s war against Ukraine had begun with the occupation of Crimea and would end with its liberation.

In Moscow, the response to the airbase attack was one of characteristic denial. Rather than accusing Ukraine, Russian officials attempted to downplay the incident and insisted instead that the multiple explosions were caused by an accidental detonation of aviation ammunition. This dubious claim is entirely in line with a number of equally implausible excuses presented by Russia over the past six months as the Kremlin has sought to explain away a series of similarly embarrassing setbacks in the country’s faltering invasion of Ukraine.

Moscow’s record of absurd excuses began in late March, when Kremlin officials attempted to rebrand the Russian retreat from northern Ukraine as a “goodwill gesture” despite the fact that it came in the immediate wake of the country’s defeat in the Battle of Kyiv.

When Ukraine sank the flagship of Russia’s Black Sea Fleet during the early months of the war, the Kremlin was predictably quick to offer up face-saving excuses. The Mosvka sank in the Black Sea on April 14 after reportedly being struck by two Ukrainian anti-ship missiles. However, according to the version of events promoted by Russia, Putin’s prized flagship actually sank while being towed in stormy seas following an accidental fire onboard. This unconvincing explanation raised eyebrows, not least as weather reports gave little indication of choppy seas at the time of the sinking.

Moscow’s excuse-making has sometimes verged on the surreal. In an apparent bid to explain why the much-vaunted Russian military has so far failed to overcome Ukrainian resistance, members of a Russian parliamentary commission declared in mid-July that Ukraine was using mutant soldiers who had been transformed into superhuman killing machines by American scientists. Commission co-chairs and serving Russian MPs Konstantin Kosachev and Irina Yarovaya were quoted in Russian newspaper Kommersant claiming to have uncovered evidence that Ukrainian servicemen were being transformed into “deadly monsters” in laboratories under US supervision.

Russia’s reluctance to publicly recognize Ukrainian battlefield successes is hardly unprecedented, of course. Deception has always played a key role in armed conflict and Moscow has long been known as an information warfare innovator. Russia also has a number of very good military reasons to downplay its setbacks in Ukraine. Any public acknowledgement of the Ukrainian military’s ability to strike high-value targets deep inside Kremlin-controlled territory would confirm the ineffectiveness of Russia’s air defense systems and would further undermine fighting spirit within the ranks of an invasion force that is already suffering from demoralization due to high losses.

At the same time, there is something obsessive about Vladimir Putin’s apparent readiness to embrace even the most damaging of disinformation rather than admit Ukrainian victories. The Russian dictator has repeatedly preferred to portray his own troops as incompetent and has invited ridicule over nonsense tales of voluntary withdrawals rather than acknowledge the humiliating truth of defeat at the hands of a country he insists does not exist.

As his invasion approaches the half-year mark, Putin is now fast running out of excuses. Initial expectations of a quick and victorious war have long since given way to the reality of a brutal conflict against a determined and capable foe backed by the might of the democratic world. Despite deploying a large part of the Russian military’s available manpower, his armies have been fought to a virtual standstill while paying a terrible price in both men and machines. This poor performance has proved devastating for Moscow’s superpower pretensions. Indeed, it is safe to say that anyone still referring to Russia as the world’s number two army is almost certainly being sarcastic.

The impact of this collapse in military prestige is already becoming apparent in Moscow’s old imperial backyard. Kazakhstan is now in open confrontation with the Kremlin and Azerbaijan no longer feels constrained by the presence of Russian peacekeepers in the South Caucasus. Tiny Lithuania recently defied Russia for weeks over the transit of goods to Kaliningrad, while even loyal Belarus has so far resisted intense Kremlin pressure to join the invasion of Ukraine.

Unless Russia is able to transform its military fortunes in Ukraine, these negative trends will only intensify. More countries will lose their fear of the toothless Russian bear, while potential allies will begin to question the value of such a geopolitically and militarily compromised partner. Already resigned to an extended period of isolation from the Western world, Russia may find itself increasingly excluded from the top table of world affairs and reduced to a junior role in its unequal partnership with China.

Putin’s perilous predicament means we could now be facing one of the most dangerous periods in modern European history as the Russo-Ukrainian War enters a potentially decisive phase. In the coming months, we should expect everything from desperate offensives and escalating terror tactics to energy cut-offs and nuclear blackmail. Nevertheless, as long as Ukraine’s Western allies can remain united in their support for the country, there is good reason to believe these efforts will ultimately fail. Putin’s criminal invasion has exposed the diminished reality behind the myth of Russian military might. Farcical talk of “goodwill gestures” and “accidental fires” merely serves to underline the point.

Efforts to reduce Russia’s cultural footprint in Ukraine have sparked criticism but in reality it is Putin who has weaponized Russian culture and forced Ukrainians to view the likes of Pushkin and Dostoevsky as tools of empire.

Image: Smoke rises after explosions were heard at a Russian military airbase near Novofedorivka, Crimea. August 9, 2022. (via REUTERS)