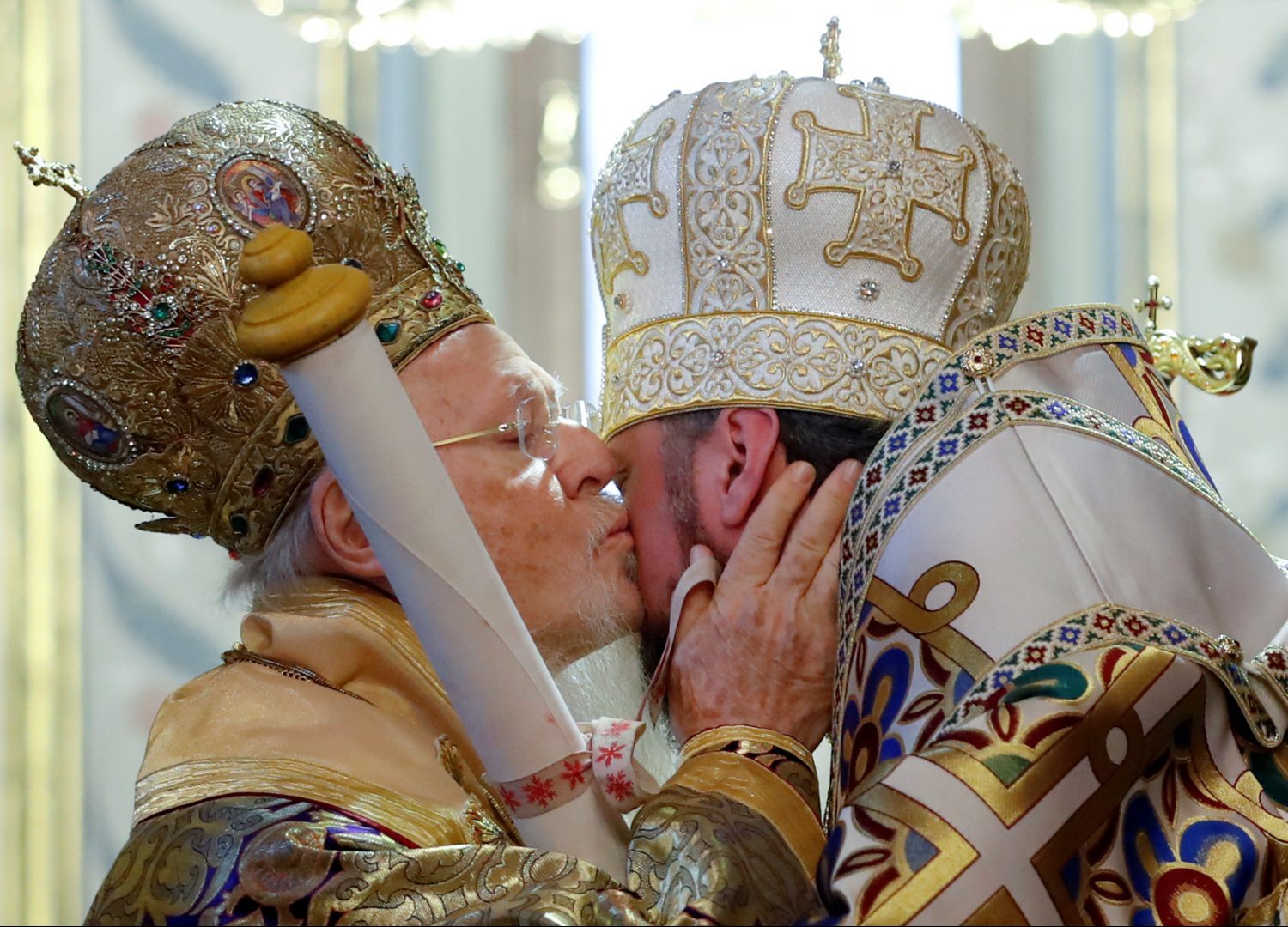 Ever since the outbreak of hostilities in early 2014, the undeclared war between Russia and Ukraine has had a religious dimension. Prior to the conflict, rival Orthodox churches had coexisted somewhat uneasily in independent Ukraine, with the canonical Ukrainian Orthodox Church of the Moscow Patriarchate owing loyalty to Russia, while the numerically superior Kyiv Patriarchate remained internationally unrecognized.

However, the alleged role of the Russian Orthodox Church and its representatives in Ukraine in aiding and abetting the Russian invasion of 2014 served to amplify longstanding calls for the creation of an internationally recognized Ukrainian Orthodox church independent of Moscow. Following prolonged negotiations, the Ecumenical Patriarch of Constantinople, Bartholomew I, duly granted Ukrainian Orthodoxy autocephaly in January 2019. This historic decision meant canonical independence for the newly established unified Orthodox Church of Ukraine. It also sparked a far wider crisis throughout the Orthodox world that shows no signs of abating.

Even before Constantinople’s decision to grant Ukraine autocephaly, Russia was already reacting to the looming threat with anger and hyperbole. In a December 2018 address to church leaders, Russian Orthodox Church Patriarch Kirill accused the United States and Ukraine of collaborating in an effort to “tear apart the last connection between our people (i.e. Russians and Ukrainians).” The new Metropolitan of the Orthodox Church of Ukraine Epiphanius responded to these attacks by branding the Russian Orthodox Church as “the last advance post of Vladimir Putin in Ukraine,” and predicting the gradual loss of Russian influence in Ukraine as a result of the country’s Orthodox independence.

In this tense confrontation between Moscow and Kyiv, recognition of the new Ukrainian Church by other Orthodox churches across the world has become a matter of considerable geopolitical importance. While the Ecumenical Patriarch of Constantinople is theoretically considered the “first among equals” within Eastern Christianity, there is no clear hierarchy akin to the supremacy of the papacy in the Catholic Church. Instead, each national Orthodox Church has been free to approach the issue from its own perspective.

So far, progress has been slow but significant. The small Patriarchate of Alexandria has followed Constantinople’s lead. Far more importantly, the internationally well-respected Standing Synod of the Church of Greece has also recognized Ukraine’s canonical independence, in spite of widespread pro-Russian sentiments among the Greek political and intellectual elite. While proving predictably unpopular in Moscow, this move also sparked controversy within Greece itself, with the country’s former defense minister Panos Kammenos calling it a “crime” and warning ominously, “if anything happens in the next few months, the Holy Synod [of the Greek Orthodox Church] will hold all responsibility for the termination of guarantees granted by Russia, due to the recognition of the illegal Church of Ukraine.”

In contrast to Greece’s Holy Synod, the Serbian Orthodox Church, a close ally of Russia, has made publicly clear that it will not recognize Ukrainian Orthodox independence. Events in Ukraine have gained additional meaning in the Western Balkans as new NATO member Montenegro is currently discussing a contentious religious bill that enables the state to confiscate the property of the Serbian Orthodox Church. The latter has, in response, blamed the crisis on developments taking place in Kyiv.

Moscow’s Patriarch Kirill has promised to fight back in 2020. “New work will now be done to strengthen Orthodoxy’s canonical purity, and even greater efforts made to preserve and restore unity where this has been shaken,” he told the Russian Church’s advisory Supreme Council in Moscow at the end of 2019. Meanwhile, Ukraine’s Metropolitan Epiphanius has predicted further progress in his country’s struggle for Orthodox independence, with “at least three or four more national churches set to recognize Ukrainian autocephaly” in the near future.

With no obvious room for compromise on the issue of Ukrainian Orthodox independence, religion looks set to remain an important factor in the ongoing conflict between Russia and Ukraine during 2020 and beyond. In all likelihood, it will continue to divide the global Orthodox faithful for as long as Moscow refuses to recognize Ukrainian autocephaly. Russia has already demonstrated its resolve by cutting ties with Constantinople, Greece and Alexandria. Further steps to reassert its traditional dominance as the largest and most influential member of the Orthodox world are now widely anticipated.

As this religious struggle unfolds, it will have a profound impact on Orthodox communities far beyond the borders of the former USSR, as recent spillovers in Greece and Montenegro indicate. Indeed, the Orthodox Church of Ukraine’s newfound independence may even have a domino effect, with other churches currently linked to the Russian Orthodox Church seeking to follow the Ukrainian example. This could cause a shift in the balance of power throughout Orthodoxy’s Central and Eastern European heartlands. It also has the potential to severely dampen imperial moods in Moscow.

Khrystyna Karelska is an alumna of the College of Europe in Natolin and Democracy Study Centre in Kyiv.

Andreas Umland is an Adjunct Lecturer at the Institute of Political Science of the Friedrich Schiller University of Jena.

This article was produced within the framework of the 2018-2019 Democracy Study Center training program of the German-Polish-Ukrainian Society and European Ukrainian Youth Policy Center in Kyiv supported by the Foreign Office of the Federal Republic of Germany.

Umland’s work for this article benefited from support by “Accommodation of Regional Diversity in Ukraine (ARDU): A research project funded by the Research Council of Norway (NORRUSS Plus Programme)”.

Image: Ecumenical Patriarch Bartholomew I kisses Metropolitan Epiphanius, head of the Orthodox Church of Ukraine, as he hands Tomos, a decree granting Ukraine church independence, after the Epiphany mass at the Patriarchal Cathedral of St. George in Istanbul, Turkey January 6, 2019. REUTERS/Murad Sezer