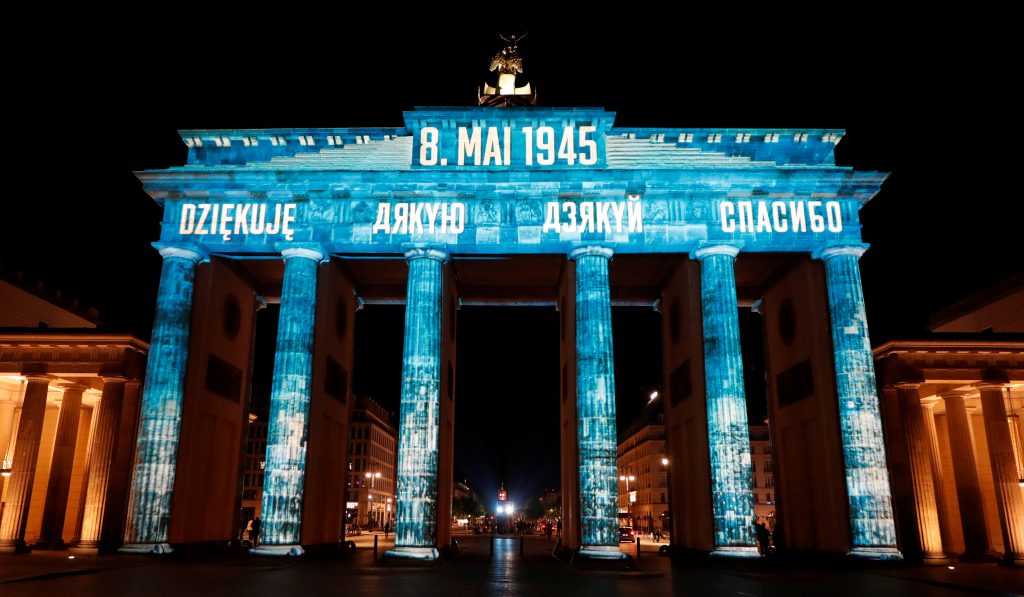 The Brandenburg Gate is illuminated with the words "Thank you" in Polish, Ukrainian, Belarusian and Russian during memorials to mark the 75th anniversary of the end of World War Two in Berlin. May 8, 2020. REUTERS/Fabrizio Bensch

As the international community marks the seventy-fifth anniversary of the Second World War, the conflict continues to loom large in the global imagination. But while few would question the importance of the war in shaping the modern world, there is less agreement over the causes and character of the conflict. This is particularly true in Europe, which saw the worst of the carnage and emerged from the wreckage of WWII as the epicenter of a new Cold War that would keep Europeans separated along ideological lines for a further four-and-a-half decades.

Although Europe is no longer divided, attitudes towards WWII continue to vary widely across the continent and remain the cause of contemporary confrontations. Even basic timelines can prove contentious. Those in Western Europe are inclined to see May 1945 as the decisive date, whereas for Europeans living behind the Iron Curtain, the end of the Nazi empire merely meant exchanging one totalitarian occupier for its Soviet successor.

This diverse range of opinion towards WWII poses challenges for the future of an increasingly united and integrated Europe. Ukraine’s bitter experience of post-Soviet memory wars, which have played a significant part in facilitating the 2014 annexation of Crimea and the ongoing conflict with Russia in the east of the country, offers an urgent lesson for the rest of Europe on the importance of fostering a common approach towards the shared past.

In order to get a better sense of current attitudes towards WWII in different European countries, the Ukrainian Institute and the One Philosophy Group of Companies commissioned research of media coverage in the United Kingdom, France, Germany, Poland, Ukraine and Russia. This research, which took place during 2018 and 2019, involved over 500 publications and analyzed WWII coverage with a particular focus on the 1939 Nazi-Soviet Pact.

The Nazi-Soviet Pact was considered particularly relevant as the research period coincided with the eightieth anniversary of the August 1939 signing of the Pact. While this anniversary guaranteed heightened international interest, the amount of coverage differed dramatically from country to country. Surveyed French media offered just five articles on the Nazi-Soviet Pact. The total in Germany was 10, while both Poland and the UK each produced 13 articles. This numbers were dwarfed by the coverage in the former USSR, with Russia producing 175 articles and Ukraine in top spot with 291.

The scope and intensity of the Ukrainian media’s focus on the Nazi-Soviet Pact suggests an ongoing and significant shift in attitudes towards WWII. Whereas mainstream Ukrainian media coverage of the conflict previously mirrored the conventional Soviet narrative of a glorious Red Army victory over Nazi Germany, Ukrainians now appear more willing to question Soviet propaganda myths about the war. This change is underlined by a switch in terminology, with Ukrainian media outlets now almost exclusively using “World War II” to describe the conflict instead of the “Great Patriotic War” branding favored in the Soviet Union and modern Russia.

Elsewhere, approaches to the Nazi-Soviet Pact varied from country to country. The German media tended to address the issue in terms of the consequences of the war on the collective memory of post-war German society. In France, coverage included re-evaluations of 1939 with a particular focus on Soviet responsibility for sparking the war. Meanwhile, the Polish media emphasized Poland’s fate as the victim of simultaneous aggression from Nazi Germany and the USSR.

Despite these differences, it was also possible to identify some common approaches. For example, the idea that the Nazi-Soviet Pact aimed to split Europe into separate spheres of German and Soviet influence was evident in the Ukrainian, French, German, Polish and UK media. Unsurprisingly, this notion of a totalitarian master plan to subjugate continental Europe was not shared by the Russian press.

Russian media coverage of the Nazi-Soviet Pact diverged sharply from the general trends evident elsewhere in Europe. This highlights the continued political potency of WWII, even at a distance of seventy five years. The two most common Russian narratives focused on justifying the Pact as a strategic necessity to contain German expansionism, and accusing European critics of exaggerating the Pact’s significance while ignoring the role of other landmark 1930s deals such as the 1938 Munich Agreement. The gap between Russian WWII narratives and perspectives encountered in other European countries is an extreme example of the distance that still exists between different understandings of the conflict.

The need for a shared narrative on WWII was in focus in early May during a panel discussion hosted by the Ukrainian Institute in London together with the Henry Jackson Society and the Ukrainian-Jewish Encounter. Participants including prominent scholars from the UK, US, Poland and Ukraine stressed the need for greater outside understanding of the war in Eastern Europe, and in particular, the contributions made by Ukrainians and Belarusians to the defeat of Nazism. As British historian Brendan Simms put it, “there’s little awareness of Soviet-Nazi collaboration or of the fact that Ukraine and Belarus bore the brunt of the German attack.”

In most cases, the process of creating a wider historical consensus must necessarily begin within individual countries. Poland’s Krzysztof Czyzewski noted that in the Polish experience, “when one withdraws from building a shared narrative, this space is occupied by extreme, nationalist narratives.” Adrian Karatnycky added that diverging Ukrainian perspectives on broader historical issues created room for conflicting interpretations of WWII itself. “There’s consensus in Ukraine that the Nazi occupation was a disaster for the country, but no similar consensus that Stalin’s legacy was a disaster.”

Ever since the aftermath of WWII and the early years of what would become today’s EU, the European continent has been moving towards greater integration. Nevertheless, this process will remain incomplete until the most difficult chapters of the shared European past are addressed and common narratives emerge. World War II remains the defining event in the continent’s modern history and the greatest challenge in this context.

The way we remember WWII has profound implications for Europe’s future. Recent academic debates and research into the legacy of the conflict suggest that perspectives remain predominantly local in character, with national interests and contemporary political considerations often combining to prevent a broader understanding of the war and its impact on European society as a whole.

This is most immediately apparent in Russia, where efforts to defend the Soviet role in the conflict and mythologize the Red Army’s contribution to the defeat of Hitler have become important elements in the country’s contemporary foreign policy. This has drawn Moscow into confrontations with a host of Central European countries and done much to fuel ongoing Russian aggression against Ukraine.

Bringing together Europe’s wide variety of often conflicting WWII narratives is admittedly a Herculean task. Clearly, no single version will ever meet with universal approval. Nevertheless, a frank dialogue on key issues such as the impossible choices facing the nations caught between Stalin and Hitler, and the fate of countries that found themselves under Soviet occupation in 1945, will greatly improve Europe’s understanding of its own history. Seventy five years on since the end of the war, we must stop reliving the battles of the past and look instead to heal old wounds.

Nataliya Popovych is President of the One Philosophy Group. Volodymyr Sheiko is Director General of the Ukrainian Institute.