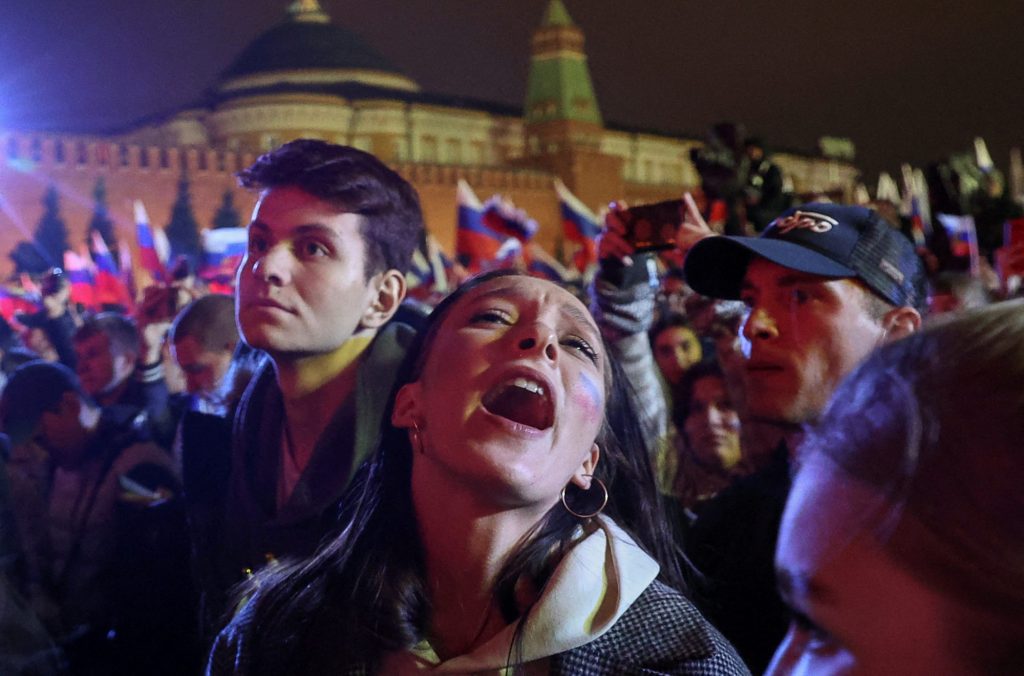 Vladimir Putin’s Ukraine invasion is rapidly unraveling, but most Ukrainians are well aware that Russia will continue to pose an existential threat to their nation for decades to come. With the current war already in its eighth month, fatigue is increasingly a factor. It is therefore vital for the international community to understand the long-term nature of the struggle ahead.

Most observers agree that Putin can no longer realistically achieve his initial war aim of extinguishing Ukrainian independence and establishing a puppet regime in Kyiv. With Putin’s invasion force suffering from mounting equipment shortages and demoralized by a combination of poor leadership and catastrophic losses, even the addition of 300,000 freshly mobilized Russian soldiers is unlikely to transform Moscow’s military fortunes. Instead, more and more analysts are now predicting either a prolonged stalemate or a Ukrainian victory.

It is not entirely clear what would constitute victory for Ukraine. As the war has progressed and Ukrainian battlefield successes have mounted, the country’s goals have become bolder. While concessions to the Kremlin might have been plausible in the early days of the war, Ukraine’s leaders now speak confidently of liberating the entire country. “Everything began with Crimea and will end with Crimea,” commented President Zelenskyy in August.

Opinion polls indicate that most Ukrainians share this sentiment and understand victory to mean the return of all occupied territories. In a June 2022 survey conducted by IRI, two-thirds of Ukrainians supported the liberation of eastern and southern Ukraine including Crimea. These poll results identified only minor regional differences ranging from 64% in the west and 67% in the south to 59% in the east. Meanwhile, just 5% of Ukrainians would be prepared to recognize Crimea as Russia and 2% would accept Moscow’s attempts to annex eastern Ukraine’s Donbas region.

Ukraine’s complete liberation remains an ambitious goal but it is no longer confined to the realms of fantasy. Following a string of stunning counteroffensive advances in September and October, many now believe Ukraine could push Russia back to the front lines of February 24 by the end of this year and return the rest of the country to Ukrainian control by the middle of 2023.

Vladimir Putin would be highly unlikely to survive the humiliation of a decisive Ukrainian victory. While it is impossible to predict exactly how his reign might end, it is equally hard to imagine the strongman Russian ruler surviving such a disastrous defeat. This is particularly true as the war is widely perceived within Russia as Putin’s personal project.

We can already say with some confidence that if Putin is ousted, his successor will not be a democrat. Modern Russia has no credible national democratic movement and lacks the pluralistic political traditions that made it possible for democracy to take root in post-Soviet Ukraine and the Baltic states. Given the political climate in Russia, any successor would almost certainly be a nationalist figure from within the ranks of the current elite. However, he (and yes, it would inevitably be a “he”) would probably be more pragmatic and therefore less prone to ranting about Ukraine.

In order to escape war guilt and bring sanctions to an end, he would seek to blame everything on Putin. This could help secure breathing space to repair Russia’s battered economy and armed forces. It would also give Ukraine some time to embark on a massive post-war reconstruction drive. At the same time, numerous major obstacles to a sustainable peace settlement would remain.

One of the most immediate challenges of the post-war period will be the quest for justice. In practice, this will mean attempting to charge the leaders of a nuclear power with war crimes. No successor regime will hand over Putin or any other senior Russian officials to an international tribunal, so it is reasonable to assume that war crimes prosecutions would have to take place in absentia. Nevertheless, it is vital for those guilty of war crimes to be held publicly accountable. Defendants should include a wide range of Russian politicians and military commanders along with the many regime propagandists who have provided the ideological foundations for Putin’s genocidal invasion.

Another urgent question will be how to make Russia pay for Ukraine’s post-war reconstruction. The obvious answer is to use the frozen Russian assets currently held by various Western nations. Work is already underway to create a legal framework for the reallocation of these frozen Russian assets, but this process could take years and will be fiercely contested by the Kremlin.

War crimes prosecutions and reparations can help undermine the sense of impunity within Russian society that helped make the current invasion possible. While most available evidence confirms overwhelming Russian public support for the war in Ukraine, Russia’s most respected independent pollster, the Levada Center, has found that a clear majority of Russians do not believe they are morally responsible for the deaths of Ukrainian civilians or the widespread destruction taking place in Ukraine.

Such attitudes are hardly surprising in an authoritarian society where nobody has ever been held accountable for the horrors of the Soviet era. Nevertheless, it is in everybody’s interests to end this cycle of impunity and encourage Russians to confront the crimes being committed in their name.

Whatever form Ukrainian victory takes, it will not mark the end of the historic confrontation between Russia and Ukraine. Today’s war is part of a grim saga stretching back centuries that is rooted in Russia’s refusal to recognize Ukraine’s right to exist.

Putin himself has frequently claimed that modern Ukrainians are really Russians (“one people”) and has accused Ukraine of being an artificial “anti-Russia” that poses an existential threat to Russian statehood and cannot therefore be tolerated. This genocidal logic is widely embraced in today’s Russia and will not disappear overnight. In reality, it may take decades before a majority of Russians are finally able to accept that Ukraine is a separate and fully independent nation.

Any leader of a post-Putin Russia would almost certainly continue to regard Ukraine as a threat. While they may not necessarily share Putin’s highly emotional obsession with the country, they would likely view Ukraine’s consolidation as a European democracy as a potential catalyst for democratic change inside Russia. In order to prevent this nightmare scenario, they would seek to undermine Ukraine’s economic recovery and derail the country’s Euro-Atlantic integration.

In public at least, Russia’s new leaders could be expected to declare their commitment to peaceful coexistence with Ukraine. However, such politically convenient rhetoric would not stop them from continuing to wage a hybrid war against the country. This could include everything from cyber warfare and terrorist attacks to political assassinations, disinformation operations, infrastructure sabotage, and the funding of pro-Russian networks throughout Ukraine. It would only be a matter of time before Ukraine faced a renewed Russian military threat.

In order to prevent another Russian invasion, Ukraine must transform itself and become a European Israel. Ukraine’s defense spending was already in the region of 4-5% of GDP prior to the onset of the current full-scale invasion. This must remain the norm for the foreseeable future. Likewise, the international security support that Ukraine has received since February must continue beyond the end of the current hostilities. It is vital that the Ukrainian military maintain its technological and organizational edge over the Soviet-style Russian army. Ultimately, this is the only security guarantee that matters.

Ukraine’s leaders appear increasingly confident of victory but they are also under no illusions regarding the future of relations with Russia, regardless of who sits in the Kremlin. “Knowing what I know first-hand about the Russians, our victory will not be final,” Ukrainian commander-in-chief Valeriy Zaluzhny told TIME magazine in September. “Our victory will be an opportunity to take a breath and prepare for the next war.”

The current war is merely the latest chapter in Europe’s longest independence struggle. This struggle will only end when Russia finally accepts that Ukraine is a sovereign country and Ukrainians are not Russians.

Taras Kuzio is a professor of political science at the National University of Kyiv Mohyla Academy and author of the forthcoming book “Fascism and Genocide. Russia’s War Against Ukrainians.”