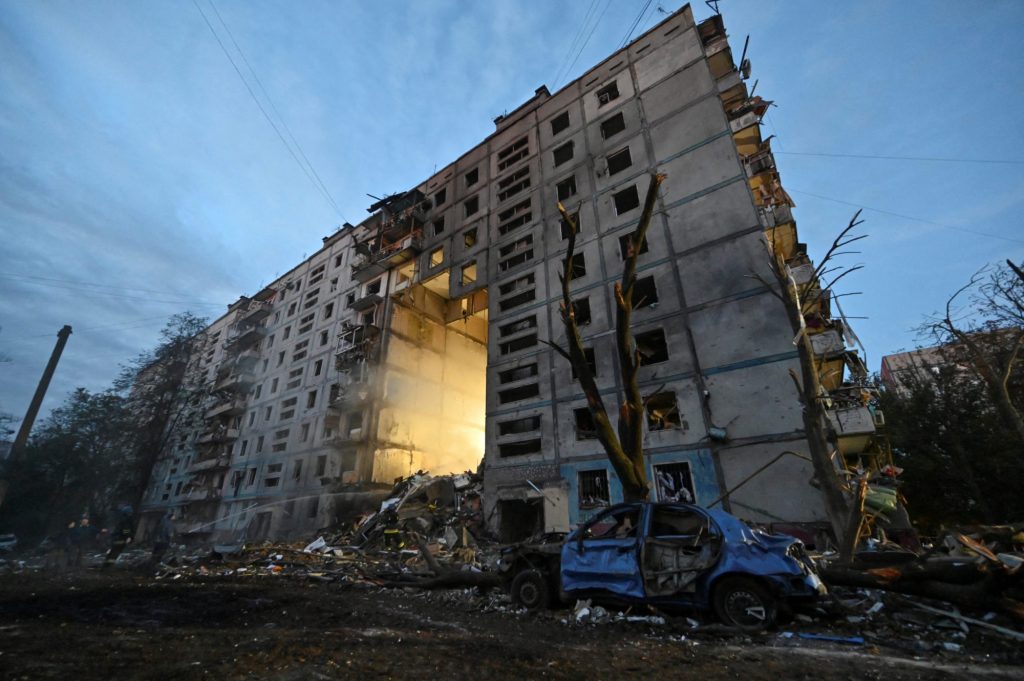 Russia fired more than 80 missiles and launched at least 24 kamikaze drones at civilian targets across Ukraine on October 10. The latest reports suggest that 19 Ukrainians were killed in the attacks with more than 100 injured. The strikes left large swathes of the country without electricity, water, and internet access. The following day, Russian airstrikes continued with around 30 missiles and 15 drones targeting civilian infrastructure.

Many international media outlets appeared to take Putin at his word and framed their coverage of the Russian missile blitz as retaliation for the earlier bridge attack. These attempts to create a single news narrative from two separate events are factually incorrect, not to mention pernicious.

The scale of Russia’s aerial attacks on October 10-11 indicates weeks if not months of planning and preparations. Dozens of targets in towns and cities across Ukraine had to be identified and confirmed; missiles, bombers, warships, and drones had to deployed and prepared for action. These are not tasks that could realistically be accomplished in the two-day window between the Crimean Bridge attack and the launch of Russia’s airstrike escalation.

In addition to these obvious practical issues, the retaliation narrative also risks creating false equivalency between Russian international aggression and Ukraine’s justifiable efforts to defend itself. The Crimean Bridge was constructed by Russia to strengthen Moscow’s illegal occupation of Ukraine’s Crimean peninsula. Furthermore, it has since been used as a key artery for the transportation of troops and military equipment from the Russian Federation to Crimea and Russian-occupied regions of southern Ukraine. In other words, the bridge plays a vital logistical role in the Russian invasion. As such, it clearly qualifies as a legitimate military target.

In contrast, Russia’s airstrikes deliberately targeted key civilian infrastructure such as power and heating stations that have no direct connection to the Ukrainian military or the ongoing war. Russia also launched missiles at a range of non-military targets in the heart of Kyiv that appeared to serve no purpose other than sowing panic and terror among the civilian population. These included a children’s playground, a pedestrian bridge, a university, and a busy downtown traffic intersection.

The destructive objectives of Russia’s blitz are entirely in line with the genocidal intent underpinning Putin’s invasion. Time and again, the Russian dictator and his Kremlin colleagues have expressed their desire to extinguish Ukrainian statehood and erase Ukrainian national identity. The war crimes currently being committed by the Russian military in Ukraine are entirely in line with the chilling logic of these words. By systematically destroying essential Ukrainian civilian infrastructure, Russia hopes to maximize human suffering among the noncombatant population and make the country unlivable.

This raises some uncomfortable questions for media outlets that have chosen to portray the recent escalation in Russia’s air war as a response to an alleged Ukrainian attack rather than as a new phase in Putin’s genocidal invasion. Would they also frame the mass rape and murder of civilians in Bucha, Irpin, Izyum, and countless other Ukrainian towns as Russian revenge? What was Moscow retaliating for when it reduced Mariupol to rubble and killed tens of thousands of the Ukrainian port city’s civilian population? No doubt the Kremlin could provide far-fetched excuses, but should the international media really allow such claims to pass unchallenged?

Framing Russia’s airstrike escalation as retaliation is misleading and irresponsible journalism. It encourages audiences to blame the victim and clouds perceptions of what is the most blatant act of international aggression in Europe since World War II. Media portrayals that imply Ukraine is at fault for defending itself risk fueling Russian disinformation and prolonging the war. As US Secretary of State Antony Blinken stated at the United Nations just weeks ago, “If Russia stops fighting, the war ends. If Ukraine stops fighting, Ukraine ends.”

Media coverage that fails to distinguish between Russian aggression and Ukraine’s defensive actions also serves to distort the debate over the need to provide Ukraine with more weapons. Critics argue that arming Ukraine merely provokes Russia and escalates the conflict. In reality, nothing could be more provocative to Putin than an isolated and defenseless Ukraine.

Almost eight months since the start of the Russian invasion, Moscow’s intentions should be crystal clear to all objective observers. Putin is aiming to destroy the Ukrainian state and is pursuing this goal in full public view. By suggesting that Russia’s actions are in some way retaliatory, international media outlets risk becoming inadvertent accessories in this crime.

Razom is a New York-based NGO.