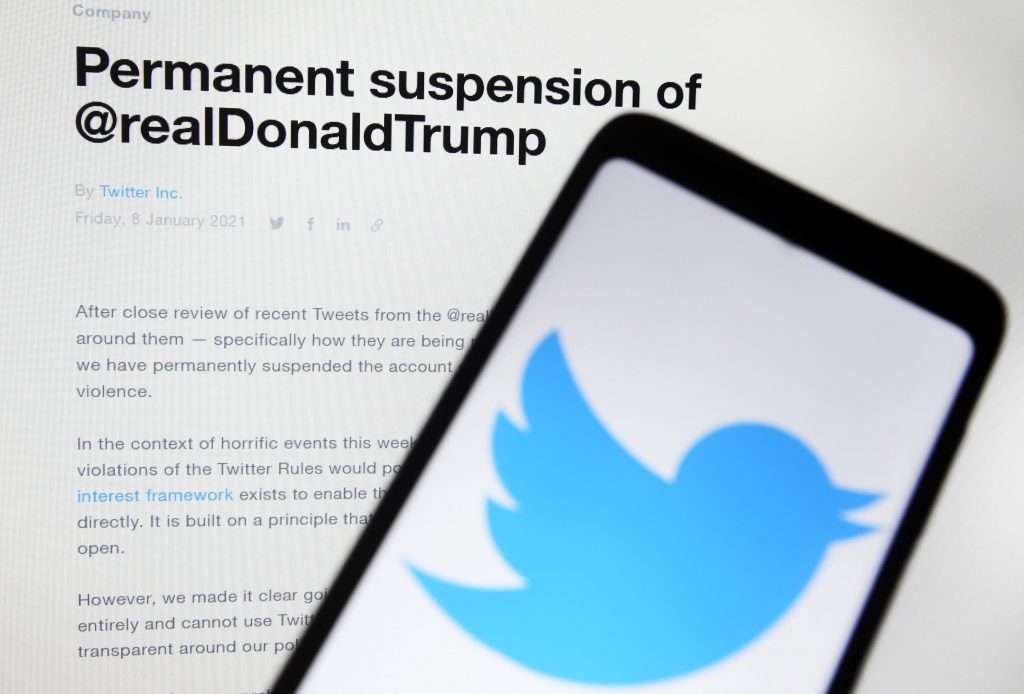 The recent decision to shut down many of US President Donald Trump’s social media accounts has sparked a heated debate over freedom of expression and censorship that has echoed far beyond America itself. The principles involved are nothing new, of course. Nevertheless, the current discussion has underlined the growing power of tech companies to control access to the information we consume, while also highlighting the need to establish transparent guidelines over the boundaries of free speech in the digital age.

These issues resonate particularly loudly among Ukrainian audiences, who have been grappling for the past seven years with the challenges of balancing media freedoms with national security. Ever since Russian troops first began the seizure of Crimea in February 2014, the Kremlin’s attack on Ukraine has relied heavily on information warfare and the innovative use of weaponized social media.

This has forced Ukraine into some very awkward choices. The key goal of the Russian invasion has always been to undermine Ukraine’s embrace of democracy and derail the country’s Euro-Atlantic integration. How can Kyiv remain committed to the liberal values underpinning its geopolitical turn towards the Western world, while at the same time imposing draconian restrictions that limit Moscow’s ability to spread dangerous disinformation among Ukrainian audiences? By defending itself against the Kremlin’s information warfare, Ukraine has left itself wide open to accusations of abandoning the very values it claims to be fighting for.

To understand the issues facing Ukraine, it is important to appreciate the broader historical context behind the ongoing Russo-Ukrainian War. It is a mistake to view today’s hostilities in isolation or assume that the narrative begins in 2014. In reality, many aspects of Russia’s hybrid war against Ukraine were present long before the addition of the military component seven years ago.

From the very early days of Ukrainian independence in the 1990s, Russia sought to maintain a strong media presence in Ukraine that served to promote Kremlin-friendly narratives. This trend was evident at the national level and in the regional media across Ukraine. Russian-financed TV channels, newspapers, radio stations, and websites routinely promoted anti-Ukrainian messages while defending their right to do so by pointing to the media freedoms enshrined in the Ukrainian Constitution.

For almost a quarter of a century, successive Ukrainian governments tolerated this troubling information environment. To the country’s pro-Kremlin political parties, Ukraine’s Russian-backed media served as an essential platform for their own agenda. Meanwhile, Ukrainian parties who backed Western integration were reluctant to call for the kind of harsh measures that would inevitably draw comparisons with the blanket censorship of the Soviet era. Instead, they tended to accept the presence of openly pro-Russian media in Ukraine as the price of a free society. Few anticipated quite how high this price would be.

For decades, the Kremlin continued its information war against Ukraine via the Russian media itself and Ukrainian media under Russian influence. This existing infrastructure cranked into top gear following the outbreak of hostilities in 2014. It was soon clear that Ukraine could no longer turn a blind eye. Early steps included the August 2014 decision to ban Russian TV channels. “As an independent sovereign state, Ukraine can and should protect its media space from aggression from Russia, which has been deliberately inciting hatred and discord among Ukrainian citizens,” officials commented at the time.

Three years later, attention turned to the role of Russian social media platforms in the Kremlin’s information war. In May 2017, Ukraine imposed blocks on a number of leading Russian social media sites including VKontakte (a Russian-language version of Facebook) and Odnoklassiki (“Classmates”). These two sites had previously been wildly popular in Ukraine and boasted over fifteen million Ukrainian users. The Ukrainian government failed to block access to the targeted Russian sites completely, but with users forced to rely on VPN services or other inconvenient options, many Ukrainians chose to switch to unrestricted international alternatives.

During the early years of the conflict with Russia, Ukraine also raised the alarm with global tech giants including Facebook over the misuse of their platforms to conduct information warfare. Well before claims first emerged of Kremlin attempts to influence the outcome of the 2016 US presidential election via social media, Ukrainian officials were warning Facebook executives of Moscow’s activities. The former head of Ukraine’s Presidential Administration, Dmytro Shymkiv, says he expressed his concerns to Facebook and US officials in May 2015. The issues he raised, including Russia’s use of Facebook to wage an “information propaganda war” via provocative and targeted fake content, have since become all too familiar to American and international audiences.

Ukraine’s experience with weaponized social media is not necessarily typical. While the wider world is now well aware of Russian disinformation operations, outside audiences still struggle to appreciate how uniquely vulnerable Ukraine is to the Kremlin’s information warfare. With virtually no linguistic or cultural barriers to impede them and thanks to considerable penetration of the Ukrainian elite, Russian propagandists are able to reach mainstream Ukrainian audiences in ways that would be unthinkable elsewhere in the Western world.

While Ukraine’s circumstances are exceptional, the country’s experience with Russian information warfare still has value for the wider world. As the discussion sparked by Trump’s Twitter ban evolves, it is worth dwelling on some of the painful lessons Ukrainians have already learned.

Years before the recent storming of the Capitol in Washington DC, Ukrainians came to appreciate the dangers of allowing hate speech and deliberate disinformation to take root in the information space. Ukraine’s plight is also a reminder that authoritarian regimes will not hesitate to exploit the liberal principles they deny to their own citizens in order to attack the democratic world. The often faltering and fumbling Ukrainian response to the Russian threat offers additional lessons in what not to do.

The information space we all inhabit has undergone revolutionary changes over the past 20 years. It is clear that the process of establishing new norms of behavior is only just beginning. In many ways, the quest to find the right balance between free speech and security will shape and define the decades ahead. There are no easy answers, but Ukraine’s experience should certainly be part of this global conversation.